Opinion: For plumbers, Christmas goes down the drain when the pipes are calling 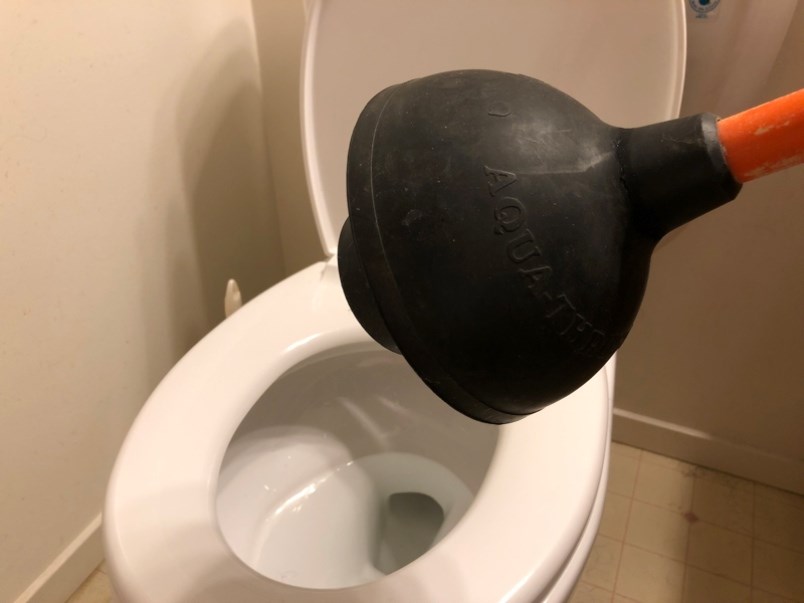 Colin Coxon fished half a turkey baster out of somebody’s pipes one holiday.

Then there were the wedding rings that, having been removed prior to the stuffing of the bird, somehow swam down a sink.

That wasn’t as challenging as the time the Victoria plumber rescued a sparkling new gold watch that somebody’s kid had sent down the loo, though. Talk about your Christmas miracles.

It turns out there’s no end to the things you can flush down a toilet. Once.

Ditto for the kitchen sink. Homeowners believe Christmas dinner leftovers can be made to vanish, poof, just like Jimmy Hoffa. “People think garburators will make anything disappear, which isn’t the case,” Coxon says. He has had clients who tried to get rid of a whole turkey carcass that way.

That’s when plumbers hear the bells on Christmas Day, panicked phone calls pulling them away from their own feasts and families. “When you do get those calls, it’s usually around dinner time,” says Jason Navaroli, owner of Victoria’s Drain Pro. “It’s mainly for kitchen sinks that are plugged.”

Unless you’re in a rural area, it’s Christmas morning, you have invited 20 friends over and the septic system has backed up. That’s a “guaranteed” call for Duncan’s G. Doran and Sons.

It turns out that, for plumbers the holidays can be the busiest time of year.

Or, put another way: Yes, Victoria, there is a Sanitation Clause. It’s the one that says if something is going to go wrong with your plumbing, chances are it will happen over Christmas.

This is not a coincidence. The holidays are when extended families crowd into a home, overtaxing the system. “When you get that many people in one house, things are bound to happen,” says Coxon, who owns Colin’s Plumbing and Heating.

It’s why, in the U.S., some plumbers refer to the day after Thanksgiving as Brown Friday. Back-to-back-to-back showers stress the hot water tank until it loses its will to live. Drains don’t have time to drain. Underlying problems — a wayward root partially blocking a sewer line, say — come to the fore.

Then there’s the whole Christmas dinner thing. Some foods just aren’t meant to go down the drain, even with a garbage disposal. Celery is stringy. Rice expands. Grease is just, yeesh. You should pour it in a container and dispose of it later. You know this, but you want to get back to the eggnog as fast as you can, so …

“When you’re busy with family, you want to take the easiest route out,” Navaroli says. He acknowledges clogging his own sink one Christmas, though he didn’t have to pay himself a knee-buckling bill to fix it. You, on the other hand, will have to decide if the call-out is worth it.

“I don’t want to be at your house on Christmas,” Navaroli says. Likewise, the plumbers who work for him don’t want to be torn away from their own families. If you’re going to make them do that, prepare to pay.

At G. Doran and Sons, they say the Christmas Day rate — $318 an hour, two-hour minimum — is enough to persuade most people that their problem doesn’t demand immediate attention after all. When people balk at that, plumber Matt Shortreid asks them: “How much would you need to be taken away from your wife and kids on Christmas morning?” They reply: “You couldn’t pay me enough.”

So when, just before the big day, a middle-aged guy asks Shortreid if he can pop over on Christmas morning and hook up the dishwasher the guy has given his wife? “That’s a hard no.”

As for Coxon, he doesn’t do Christmas call-outs at all anymore.

That means no repetition of the time he got a desperate call from a couple whose toddler had just taken Mom’s gift to Dad, the aforementioned gold watch, and flushed it down the toilet.

Popping the throne off, Coxon ran a plumbing camera down the drain, eventually finding the watch well past the toilet. Retrieving the timepiece involved forcing it outside the house and plucking it from the pipe, which was reached by digging a hole in the lawn.

That story doesn’t surprise Navaroli. Anything that’s small enough to flush down a toilet, his plumbers have fished out. “Kids are definitely going to be doing stuff if they’re not watched.” Particularly on Christmas Day, when they’re running in packs and the parents are distracted.

Which, gosh, is just another thing to worry about, along with not Griswolding the cat or sending the winning scratch’n’wins up the chimney.

So be prudent. Allow time between showers. Pour some de-greaser down the drain, Navaroli says.

After using a garburator, run the hot water for at least 30 seconds. Don’t forget the usual cold-weather precautions: Turn off the indoor shut-offs for your outdoor taps and disconnect the garden hose.

Coxon says a frozen hose can freeze the water right into your house, which is where you’ll find the broken pipe when the thaw comes. Tend your septic system, Shortreid advises.

Christmas should be about sugarplums, not plumbers.

This story originally appeared in the Times Colonist.