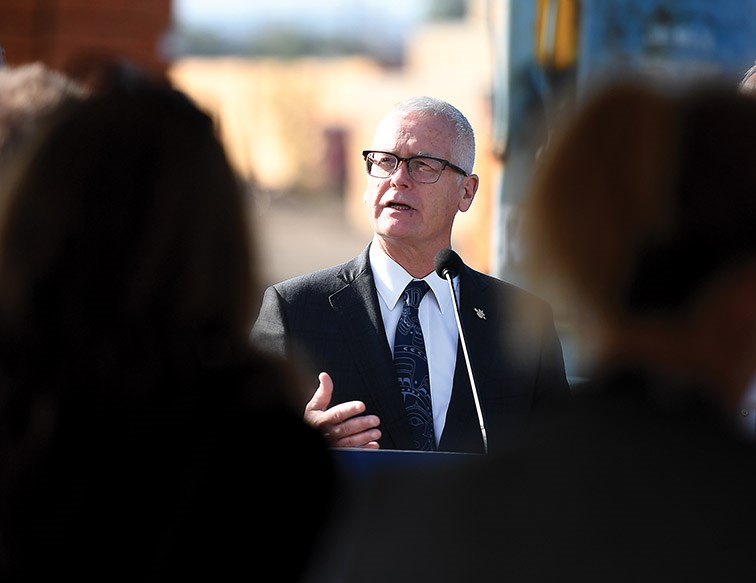 The centrepiece is $40 million over two years for an early-retirement bridging program for older forest workers. Rounding out the measures are $15 million for a new short-term employment program, $12 million for skills training and $2 million for a job placement coordination office.

Flanked by Labour Minister Harry Bains and parliamentary secretary Ravni Kahlon, and with a throng of United Steelworkers among the dignitaries looking on, Donaldson made the announcement at a Sinclar Group yard off River Road in Prince George.

He said as many as 3,000 workers could benefit from the measures with the bridging program accounting for 400 in the "first go round."

"We know about of third of those who've been laid off or under indefinite curtailment are probably in the age-eligible category of age 55 or above," Donaldson said while fielding questions from local media.

Along with those directly impacted by a mill closure, age-eligible workers at other mills whose positions could be filled by a younger worker from an affected mill would also qualify, he noted while making the announcement.

"And that's an important point because we want continuity of a good, strong, skilled worker base to guide us into the future for future opportunities in the sector," Donaldson added.

The bridging program is over two years and is contingent on cost-sharing with workers' respective employers. That raised an alarm bell for B.C. Liberal Opposition Forests Critic John Rustad, who took the event in from Victoria via streaming.

"If they expect industry to step up to the plate at this time when they're losing so much money, I think that's a pretty tough ask," he said in an interview.

"This, today, will not make everything right but it will soften the blow for a lot of our members in the smaller rural communities," he said.

In a conversation with Kahlon, O'Rourke called for a jobs commissioner similar to one appointed when the New Democrats previously held power in the 1990s as a way to make sure companies impose curtailments and shut downs for the right reasons.

"I think we need to hold these forest companies to task - the ones that are just, in our opinion, closing down the mills, holding our members as hostage to try to get reductions in stumpage and other things," he told Kahlon. "These mills are viable operations, there is timber in the areas and they're still being shut down."

Donaldson also called on the federal government to add to the funding. While attending a meeting of federal, provincial and territorial forest ministers in August, he delivered a letter to a representative of federal Natural Resources Minister Amarjeet Sohi outlining a five-point plan for further collaboration between the two levels of government.

However, with the election now underway, it looks like he will have to wait until sometime after Oct. 22 to get a response from Ottawa. The governing NDP should have acted sooner, Rustad said.

"They should've done this months ago," he said.

Tracy Calogheros, who is running for the Liberals in Cariboo-Prince George, was the only candidate in the federal election to appear at the event. Electing a Liberal to the riding will help draw federal money, she suggested.

"I know that there is an opportunity to really advocate on this part of the region but you really need to do that from a government position, so I've done what I can from the outside," she said.

Donaldson dismissed calls to reduce the stumpage companies are charged for the logs they process, saying that would only risk compromising Canada's appeal of the tariffs on softwood lumber shipped to the United States.

Asked about the B.C. Liberals call to calculate stumpage on a monthly basis rather than annually with adjustments each quarter, Donaldson said that would be counterproductive given the current high price logs are fetching due to a lack of supply.

Rustad suggested otherwise, saying seven of the last 10 B.C. Timber Sale blocks on the coast that were put on the block failed to draw any bids.

"Companies are not bidding up the cost of logs at this point because the cost structure is so high and the demand is so low," Rustad said.

He said B.C. is the highest-cost producer in North America and about 60 per cent of the problem is due to high stumpage and 40 per cent to government taxes and red tape.

"Whether it's the employer health tax, whether it's the carbon tax, the myriad of policy and reporting changes that have been put in place by this government, the delays and the challenges of trying to get cutting permits and permits through the process - all of that adds into that cost," Rustad said.

Rustad did applaud the $15 million for a new short-term employment program, noting it will go towards removing fuel load to reduce the chances of wildfires in forests adjacent to communities.

"I give them kudos. I think that's a good program to have set up and in place," he said. "I just hope there isn't too much bureaucracy put in place around getting that money out and getting that work done."

Donaldson also said municipalities where a mill has been permanently closed will be eligible for $100,000 and those where a mill is on indefinite closure and where more than one-third of he workforce is in need of permanent or temporary employment will receive $75,000.

"Municipalities responding to a shift reduction will also have access to a pool of funding to provide defined services to workers and families based on identified need," he added.

She also called for a ban on export of raw resources "so that we can add value to them locally and stop being so affected by low commodity prices," and a ban on the spraying of glyphosate on stands of spruce, pine and fir, "so that our deciduous trees can regrow to act as both fire and beetle barriers."

Brink Forest Products Ltd. owner John Brink was among those who attended the announcement. He called the current situation a "perfect storm" of troubles and said it warrants a thorough review of how the industry is managed in B.C.

"Obviously what we're doing is not working - we have to look at adding more value, making different products for different markets and we have to invest more in training and in skill sets and all of that, and I believe the time is now," Brink said.

"We'll have a strong forest industry in the future," Thiessen said. "It will be different, it will be smaller, but I think it will be a stronger one but we needed something to get us through the next number of months."