Air quality in Prince George has seen a "consistent improvement" in the last 15 years, with encouraging concentrations from key pollutants, according to a recent report.
Sep 20, 2016 10:12 PM By: Samantha Wright Allen 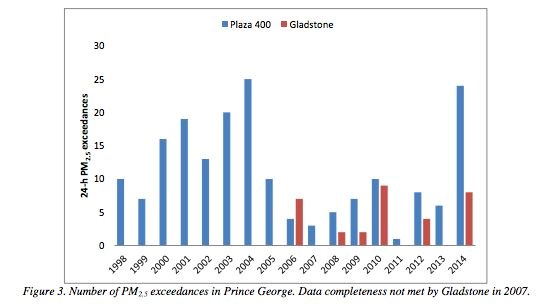 Air quality in Prince George has seen a "consistent improvement" in the last 15 years, with encouraging concentrations from key pollutants, according to a recent report.

"All in all air quality in Prince George has improved since 1998 due to many years of public education, monitoring research and pollutants controls put into place by governments and local industry," the city's director of public works Gina Layte Liston told council Monday as she presented a recent Ministry of Environment report that looked at data until 2014.

Prince George is in the final year of an 18-year air quality management plan, that aimed to reduce particulate matter from 1998 levels by 40 per cent. The report doesn't say where Prince George sits on that goal and neither the city or Prince George Air Improvement Roundtable (PGAIR) could confirm by print deadline.

Particulate matter (PM) is the main emission concern for Prince George because of its health impacts and volume within the airshed. The number of times it exceeded health levels spiked in 2010 and 2014, mainly due to wildfires, but the report said it would still be too high without that factor.

"This indicates that, while wildfires do have an impact on the pollutant load, local emissions are still significant and are likely to lead to exceedances even in the absence of wildfires."

Industry like pulp and wood, transportation and forest fires all help create PM 2.5, which is particulate less than 2.5 micrometers in diameter. Both short and long-term exposure to it can lead to "adverse health effects," the June ministry report said. PM10, meanwhile, is made up of both coarse and fine material pulled from unpaved road dust as well as emissions from wood processing industries.

"Over the years, Prince George had some of the highest levels of PM 10 and PM 2.5 in the province, and has been considered the primary pollutant to address in air quality management in the Prince George airshed," a city report noted.

Because of its geography, Prince George is susceptible to high levels of air pollution. The bowl-shaped river valley surrounded by steep ridge lines means on days with light wind, the cooler air is trapped by a layer of warm air "resulting in stagnation" and pollutant build-up.

Mayor Lyn Hall said the city might consider enforcing sweeping rules because every year councillors get calls about contractors who don't use water or dust suppressants, which is required.

The final phase of the PGAIR plan puts emission reduction from woodburning appliances, transportation and commercial sectors, vehicle emissions and dust as its key priorities.

Less vehicles on the road "will be a tough one" said Albert Koehler, but Layte Liston said the kind of fuel matters and the type of vehicles the city uses too.

"We're heading in the right direction," said Murry Krause after the update. "I think we have to lead by example."

The debate around banning wood-burning stoves from new buildings should be reopened argued Jillian Merrick, though she noted the last time it created a lot of community tension.

"I still think there's some gaps," she said. "We don't want to force people to pull out their old stoves and install expensive systems but we know the reality is they're not appropriate in an urban environment."