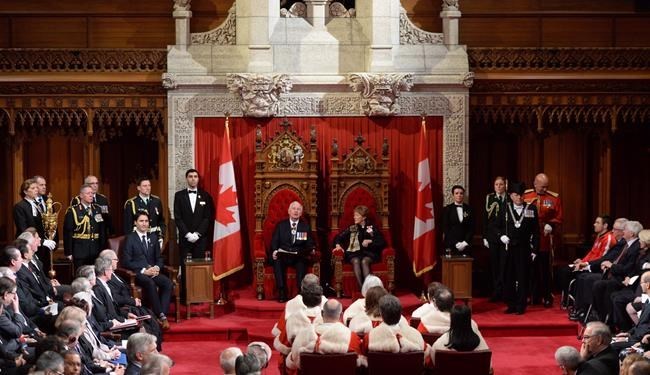 Justin Trudeau ushered in a new era of minority Liberal rule Thursday with a throne speech brimming with humility, goodwill and promises of collaboration with opposition parties whose support he needs to ensure his government's survival.

The effort worked, at least insofar as guaranteeing the government will win a vote on the throne speech. Bloc Quebecois Leader Yves-Francois Blanchet said his party's 32 MPs will support it, despite serious reservations about its content.

But it also made pointed references to issues that are dear to the NDP and Bloc. The Liberals will need the support of at least one of those two parties to pass legislation and survive confidence votes.

Universal dental care, one of NDP Leader Jagmeet Singh's priorities, was cited as an idea "worth exploring" and one that Parliament was encouraged to look into.

In a nod to one of the Bloc's priorities, the government promised that dairy farmers impacted by recent trade agreements will be "fully and fairly compensated" — with many receiving their first cheques this month.

Moreover, the speech emphasized that the government "is open to new ideas" from opposition parties.

The speech was more about tone than substance, attempting to demonstrate to Canadians that Trudeau's Liberals — reduced to 157 seats, 13 shy of a majority, on Oct. 21 — have heard the message sent by voters after a particularly nasty, hyper-partisan campaign.

"Parliamentarians: Canadians are counting on you to fight climate change, strengthen the middle class, walk the road of reconciliation, keep Canadians safe and healthy, and position Canada for success in an uncertain world,"Payette said. "And with goodwill, humility and a willingness to collaborate, you can do just that."

The speech also recognized indirectly that the Liberals were shut out in Alberta and Saskatchewan, Canada's oil and gas heartland where anger over Liberal environmental policies has fuelled talk of western separatism.

"The government has heard Canadians' concerns that the world is increasingly uncertain and that the economy is changing," Payette said. "And in this context, regional needs and differences really matter. Today's regional economic concerns are both justified and important."

The speech noted that "a clear majority of Canadians voted for ambitious climate action now," and reiterated the Liberals' pledge to maintain the national carbon price and achieve net-zero carbon emissions by 2050. Net zero means greenhouse gas emissions are reduced so much that the remaining emissions can be absorbed by natural or technological means, leaving none to remain trapped in the atmosphere.

There was no direct reference to the Trans Mountain pipeline expansion project, which is opposed by the Bloc, New Democrats and Greens as antithetical to the fight against climate change. The Trudeau government purchased the pipeline to ensure the project, which is to carry Alberta oil sands crude to the British Columbia coast for export overseas, goes ahead.

But, as hard as the government vowed to fight climate change, the speech promised it will "work just as hard to get Canadian resources to new markets and offer unwavering support to the hardworking women and men in Canada's natural resources sectors, many of whom have faced tough times recently."

Andrew Scheer, who is facing an internal battle to hang on as Conservative leader, condemned the speech for failing to admit Trudeau's responsibility for triggering a "national unity crisis" and putting the boots to the energy sector with misguided climate change policies and environmental bills.

He said he'll propose an amendment to the speech Friday, which would essentially replace the Liberal agenda with a Conservative one, including repealing Liberal environmental legislation and committing to creation of a national energy corridor. Scheer declined to say whether the amendment will amount to a confidence test for the government, which will depend on how it's worded.

Singh said the NDP's 24 MPs will also be looking for amendments, but of an entirely different nature. He condemned the speech for offering nice words but little concrete action on the issues that matter most to Canadians, like pharmacare and affordable housing.

"At this point in time, we're not satisfied with what we're hearing," Singh said. "If they want our support, they've got to work for it."

Blanchet had plenty of criticisms as well, particularly over the government's apparent hope that opposition parties won't balk at support for pipelines and the oil industry as long as those words aren't actually used. Still, he said the Bloc will support the speech.

Thursday marked the first throne speech since Parliament's iconic Centre Block was closed for at least a decade worth of massive renovations. Because the House of Commons and Senate are now temporarily housed in separate buildings three blocks apart, the traditional stately parades of black-robed parliamentary officials between the two parliamentary chambers were conducted via buses.

While waiting for the contingent of MPs to arrive in the Senate chamber after being summoned to hear the speech, Payette took the opportunity to shake hands with the Supreme Court justices and other assembled dignitaries. Trudeau followed suit and the chamber briefly resembled a cocktail party, with everyone mingling and chatting.