It's a funny story and who better to live it than a stand-up comedian who got his start and developed his comedic talent through his extensive volunteerism. Mike McGuire started volunteering with the Kin of Canada in 1984 in Prince Rupert.
May 10, 2017 9:29 PM By: Christine Hinzmann 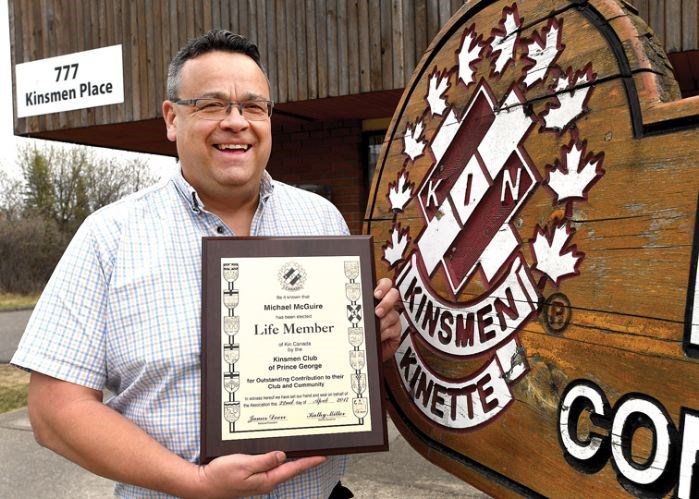 Mike McGuire has volunteered with Kin Canada since 1984 and recently received was honoured with the designation of a Life Member of Kin Canada because of his dedication to the Prince George Kinsmen Club and community at large.Brent Braaten, Photographer

It's a funny story and who better to live it than a stand-up comedian who got his start and developed his comedic talent through his extensive volunteerism.

Mike McGuire started volunteering with the Kin of Canada in 1984 in Prince Rupert.

"I was new to town and I didn't know anybody and the best way to get involved in the community is to meet people," McGuire said. "Since then it's been what I do."

He joined the Kinsmen Club of Prince George when he moved back to town in 1989.

"For any member it's how much you can give," McGuire said. "And I don't have a lot else going in my life so I can volunteer as much as I want. So from organizing events to selling raffle tickets to recruiting members and we administer that hall (The Kinsmen Complex) on our own so sometimes you're just sweeping floors or setting up tables - so nothing cool or fun but just being involved."

An hour a week, or an hour a month, whatever a volunteer can offer the Kin Club is welcome, McGuire said, who puts in about 10 hours a week.

Over the years the rest of the club members have developed into friends, McGuire added.

"So you don't really want to let them down," McGuire said. "You want to be out there and you want to help. As a club last year we grew from four to 14."

As a four-member club the slogging was tough, he added.

"All of a sudden we started growing and that's a relief," McGuire said.

With the pressure off, McGuire took on the additional role of governor for B.C., which consists of 40 clubs, and duties include communicating with the national club and disseminating information, and making sure everyone's dues are paid.

"I make sure all the biddily bits are looked after," McGuire said.

Stand Up for Charity is a dinner and a show event hosted by the local Kin Club.

Oddly enough, the event was not McGuire's brainchild.

"A former member said we had to do something fun to show people we're not all business and he said what about a comedy show," McGuire said. "Everybody jumped on and it just went from there."

McGuire took over about show number four when they were looking to make it bigger.

Amateur local comedians were included on the show's roster.

To decide who would be part of the show, there was a showcase of talent at a different venue. When there was a callout nobody responded, so McGuire threw his hat into the ring, and of course Prince George being the last minute town there were about seven people that ended up in the showcase.

"That exposed me to the comedy community here and from there I got invited to do other amateur shows with the other comedians and it just went from there," McGuire said.

During one of the early shows, Vancouver comedian Toby Hargrave was featured and when McGuire got to chatting with him Hargrave told him that if he was ever in Vancouver that he could get him in an amateur show on stage there.

"And then I was hooked, right?" McGuire said.

Bookings were through Yuk Yuks and he went down to Vancouver and saw professional comedian Erica Sigurdson. After the show he asked her if she'd come to Prince George to perform. That led to McGuire doing the bookings for the show himself and getting to know the comedic community in B.C. very well.

As McGuire's volunteerism grew into the entertainment sector, so did his career as a stand up comedian.

He has recently been cast to be part of the Debaters that will be taping in Prince George next Tuesday, a project he spearheaded when he launched a Facebook page called Let's Bring CBC's The Debaters to PG last June and got the producer's attention.

"You want to talk about a Canadian resume for comics?" McGuire said. "The Debaters has to be on it. As a volunteer it opens you up to so many possibilities. It's crazy. You know you put yourself out there and you just don't know where it's going to take you. My public speaking ability is because of Kinsmen, my comedy is because of Kinsmen and you look at all these things and it's all because of Kinsmen."

McGuire's volunteerism doesn't stop at the Kin Club. He spent six years on the board of the Friends of Children board. The non-profit society helps with travel, accommodations and meal costs associated with out of town expenses when families must leave Prince George to seek treatment for their ailing children. He also volunteers with the BCNF, the BC Neurofibromatosis Foundation and what McGuire calls the tumor foundation, because his nephew has the condition. So McGuire's efforts are inspired by him. Through Kin Canada McGuire has been acknowledged in the past for his volunteer efforts with Cystic Fibrosis Canada.

McGuire is on the board of the Kinsmen Foundation where the goal is to assist adults with mobility issues.

Most recently McGuire was surprised with the honour of being designated as a Life Member of Kin Canada because of his dedication to the Prince George Kinsmen Club and community at large.

The Extra's Volunteer City series features local volunteers each week who have previously received little or no public recognition for their efforts. If you know someone who fits that description, send me a note at chinzmann@pgcitizen.ca or give me a call at The Citizen (250-960-2773).