A B.C. Supreme Court Justice issued an injunction Friday temporarily ordering opponents of the Coastal GasLink pipeline to allow workers access to a disputed area south of Houston and start work on the $6.2-billion project.
Dec 14, 2018 7:48 PM By: Mark Nielsen 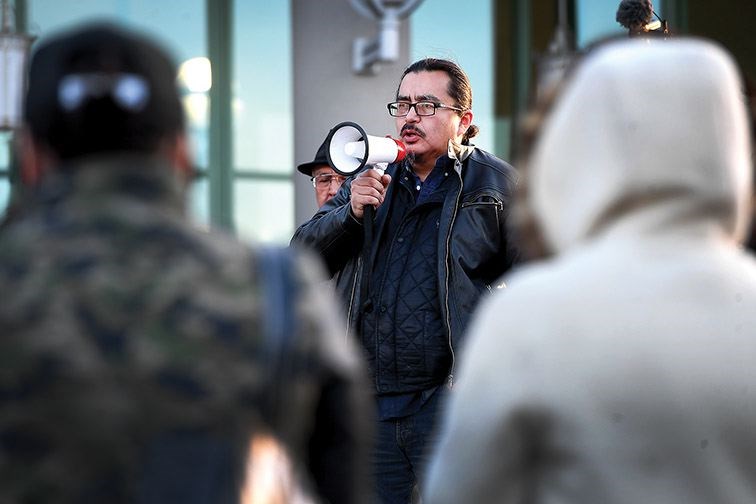 Warner Naziel speaks at a rally Thursday in support of the Unist'ot'en blockade of the Coastal GasLink pipeline. A temporary injunction against the blockage was issued Friday.Citizen file photo by Brent Braaten

A B.C. Supreme Court Justice issued an injunction Friday temporarily ordering opponents of the Coastal GasLink pipeline to allow workers access to a disputed area south of Houston and start work on the $6.2-billion project.

Since 2012, a blockade in the form of a gate has been up across the Morice River bridge on the forest service road of the same name largely in opposition to the project, a 670-kilometre pipeline that would send natural gas from a station near Dawson Creek to the fledgling LNG Canada near Kitimat.

The blockade was established in the name the Unist'ot'en, a group within the Wet'suwet'en Nation, although Freda Huson and Warner Naziel were named as the defendants in Coastal GasLink's notice of claim seeking the injunction.

The injunction will come into effect on Monday and remain in place until no later than May 1, 2019. Coastal GasLink had been seeking a permanent injunction but Justice Marguerite Church found the defendants have not had enough time to respond to the company's notice of claim and opted for a temporary order.

In a statement, Coast GasLink, a wholly-owned subsidiary of TransCanada Corp., said it "appreciates the court's decision" which will allow it to move forward with pre-construction activities. The company also stressed it is only looking for access to the bridge.

"The camp established next to the bridge will remain as is. In fact, we see no reason why the camp cannot continue with its activities. We simply need to use the public bridge to access our pipeline right of way."

The corridor is located about one kilometre south of the camp "and does not overlap or directly affect the camp, as some reports have claimed," the company also stressed.

The injunction comes with an enforcement order authorizing the RCMP to uphold the injunction if there is push back.

"The area of the blockade is remote, the number of persons present at the blockade varies, the time for the plaintiff to perform their work is very limited and based on social media posts by the defendant, there is an indication that the defendants and their supports may not obey the interim injunction order," Church said.

During submissions on Thursday at the Prince George courthouse, Coastal GasLink lawyer Kevin O'Callaghan said the company had obtained all the necessary permits and authorizations necessary to build the pipeline and in the process had consulted with Indigenous groups along the route, including the office representing the Wet'suwet'en hereditary chiefs and the five Wet'suwet'en bands recognized under the Indian Act.

He said Coastal GasLink has also reached benefit agreements with all 20 elected bands along the route, including the five Wet'suwet'en bands. O'Callaghan read in portions of affidavits outlining the tens millions of dollars at stake for the Wet'suwet'en in the form of contracts to carry out logging, clearing, road building and camp services.

The company had maintained a policy of working around the blockade but with the Oct. 1 decision to go ahead with both the pipeline and the $31-billion LNG Canada project, the court was told it needs to begin pre-construction work in January to avoid delays of as much to a year further along.

It was also noted that the blockaders have allowed Canfor access to carry out logging along the Morice Forest Service Road. Coastal GasLink's pre-construction work includes repairing and upgrading roads and culverts, clearing the corridor of trees and establishing a work camp.

Church said she found the work Coastal GasLink intends for that phase of the project is consistent with the forestry work already being carried out beyond the blockade and noted the work camp will be set up on an existing cutblock. Beyond that, no other work on the pipeline is scheduled for the area until June 2021, she noted.

She also found there is enough prima facie or first-view evidence that actions of the defendants are unlawful and pose irreparable harm to Coastal GasLink to warrant a temporary injunction.

"Given the logistical complexity of the project, any delays to the construction schedule could jeopardize the entire project, posing losses to the plaintiff and the various joint venture participants and contractors in the range of several hundred million dollars," Church said.

"This would include significant and direct negative financial consequences to the Wet'suwet'en and other Indigenous-owned companies who have contracted and subcontracted for some of the project work.

"Delay to or loss of the project could also cause indirect harm, including delayed access for Indigenous bands to financial access and other benefits under agreements with the plaintiff and the province."

Moreover, if the defendants were eventually found responsible for causing such harm, Church said there is "no real chance" of recovering the loss from them.

Conversely, she found the harm to the defendants of allowing Coastal GasLink access for the interim would be "relatively minimal."

Although it's described on its website as a clan, the court was told the Unist'ot'en is a matrilineal group that spans across three house groups in the Gil_seyhu or Big Frog clan. Huson is a member of the Unist'ot'en and a spokesperson for the Dark House and an elected member of the Witset, one of the Wet'suwet'en Indian Act bands.

Along with consulting with each of the bands and the office of the heriditary chiefs, the court was told Coastal GasLink and the provincial government were asked to consult with Dark House separately.

Attempts were made through Naziel, Dark House's hereditary chief Warner Naziel and through Huson. But they refused to meet and provided no substantive comments during the permitting process other than to maintain their opposition to the project.

Coastal GasLink has agreed that it did not consult with the Unist'ot'en, saying the group was not identified by the B.C. Environmental Office as a governing Wet'suwet'en body.

O'Callaghan had disputed the defendant's contention that they have not had enough time to provide a proper response, arguing they had known since at least Oct. 1 if not for years that the matter would come to a head.

But Church found they were not compelled to seek legal counsel until a notice of claim had been served. That occurred on Nov. 29, just two weeks before the hearing, and it was not until Friday that Huson and Naziel had secured a lawyer.

They were served at a time when Naziel was dealing with a family issue - his mother is in palliative care claim. Accompanying the claim was 17 affidavits amounting to 2,400 pages, it was also noted.

As many as 60 people attended the hearing on Thursday at the Prince George courthouse. On Friday, Church delivered her decision from Williams Lake via videoconferencing into courtrooms in Prince George and Smithers. About 30 people packed the courtroom in Smithers and 10 took in the decision in Prince George.