Thieves caused extensive damage to a back entry and stole more than $3,500 in items from the historic Sunset Theatre in Wells last week.
Mar 31, 2021 6:30 AM By: Rebecca Dyok,Local Journalism Initiative Reporter 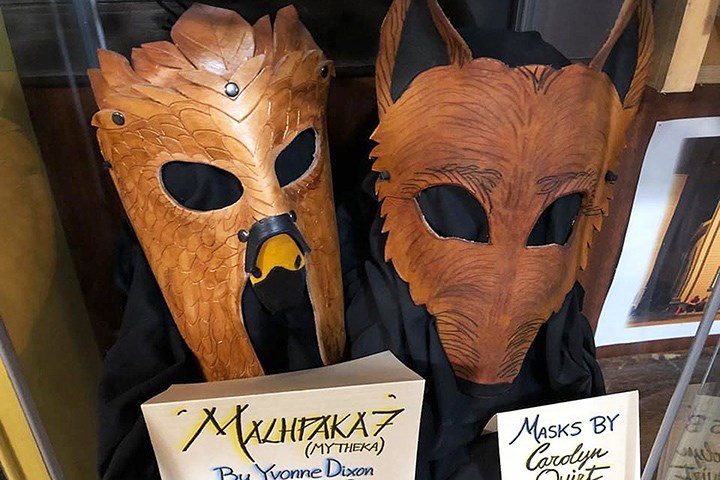 These masks by First Nations artist Carolyn Quirt were among the items taken by thieves from the Sunset Theatre in Wells. (Karen Jeffery photo)

Thieves caused extensive damage to a back entry and stole more than $3,500 in items from the historic Sunset Theatre in Wells last week.

But the most difficult aspect of the crime, which occurred the evening of March 23 or early morning of March 24, is the loss of four irreplaceable, custom-made Indigenous masks, says theatre presentation director Julia Mackey.

“That’s really the thing that’s the most heartbreaking,” Mackey said Thursday, March 25 after the theatre posted to their Facebook page asking the public to keep a lookout for the artwork.

Mackey said the masks were kept in glass display cases at the theatre after the masks were custom-made by Indigenous artist Carolyn Quirt for Mahlpaka7 (pronounced Meh-thek-ka), a play they were developing with elder Yvonne Dixon. The masks were later purchased by theatre owner Karen Jeffery.

“Karen just loved them so much and wanted them to be part of the history,” she said.

“One of the things that builds the soul of the theatre is the work you’ve done in the past. Everyone would comment how beautiful they are. I hope someone will notice them (if they are being sold).”

Mackey entered the building Wednesday to prepare their concession which is operating as a fundraising café on Wednesdays and weekends since having to close due to COVID-19.

With the latest provincial public health order leaving the theatre unable to host any live performances or screenings, they have been also using their downtime to complete some reorganizing and renovations and so she didn’t notice anything was wrong at first until she discovered the display cases were gone.

Mackey then found a stool with a lighting board from the basement propped up on it in the lobby. In the box office drawers were opened with items strewn across the floor and the cash box containing $200 was missing.

“As we walked through each part of the theatre we discovered others things had been taken,” she said.

“It was just a really horrible feeling to realize somebody had been in your space.”

Microphones, ink cartridges, acoustic Yamaha guitar, a drill and CD player were also stolen by the suspect or suspects who are believed to have used a crowbar to break through the back door of the theatre.

Locals later said they had heard something at around 1 a.m. but believed it was just heavy snow coming off a roof, Mackey said.

“We tracked a footprint but that was the only thing we were able to track down.”

Mackey believes it was someone that knows the theatre who committed the crime, but they have no other information.

The theatre was built in 1934 and was originally a movie house to entertain mine workers. Karen and Dave Jeffery bought the theatre in 1999 and spent seven years renovating it and making it into a live performance space.

Since the pandemic, the owners have been able to keep the theatre open thanks to emergency funding from some of the arts councils in town, Mackey said, noting she is concerned their insurance premiums will increase due to the crime.

On a bright note, Mackey said they have had an outpouring of support from residents since the theft was made public.

“Even today we’ve had so many beautiful messages from people. Two or three people even sent e-transfers without us asking so that was very, very kind.”

Anyone with information regarding the crime is asked to contact the Wells RCMP at 1-250-994-3314.