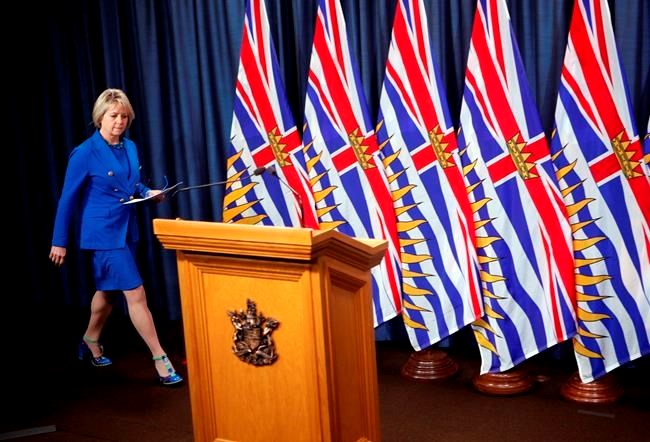 Provincial health officer Dr. Bonnie Henry arrives to the podium for a news conference in the press theatre at the B.C. legislature in Victoria on Thursday, October 22, 2020. THE CANADIAN PRESS/Chad Hipolito

The extra public health measures that were put in place two weeks ago in the Lower Mainland, have been extended for two more weeks and expanded to include the entire province.

Until midnight on Dec. 7, all British Columbians are ordered to only socialize inside with people in their immediate household, and avoid all non-essential travel, Henry said.

"All community-based social gatherings will be suspended for two weeks," Henry said. "(But) it is okay to go for a walk outside with a friend."

Essential interactions – like helping an aging parent get their groceries, or watching a child for a family member – are still allowed, she said.

All in-person worship services are suspended until Dec. 8, but events like weddings, funerals and baptisms will be allowed to continue with a maximum of 10 people in attendance and no social gatherings before or afterward, she said.

"This is one of the things we do very reluctantly," Henry said. "(But) we've seen transmission in churches, gurdwaras and temples."

For the next month, no spectators are allowed to attend any indoor or outdoor sporting events, and teams are prohibited from travelling outside their local area to play games.

Wearing non-medical masks is now mandatory in all public and retail spaces for staff and customers, unless the customer is eating or drinking in a restaurant, Henry said.  Workers at businesses should be wearing masks in any public or common areas, like elevators, hallways, etc.

"The conditions that you need to make them safe are not possible. It's these very-high risk groups that need to stop now," she said. "We'll be creating advanced guidelines for other indoor fitness programs."

The goal of the new restrictions is to ensure important services like schools and businesses can stay open, she said. There has been very little transmission in schools, restaurants – where the guidelines are followed – hair salons, etc., she said.

To ensure businesses and other organizations are following public health guidelines, Henry said her office is working with other agencies to increase active and proactive inspections. Businesses or organizations that aren't compliant with public health rules will be fined or shut down, she said.

The new rules were put in place on the same day Henry announced 538 new cases in B.C., including 11 new cases in the Northern Health region.

One additional COVID-19 related death was reported in B.C., bringing the province's death toll from the pandemic to 321 – including five northern B.C. residents.

Active cases in the north declined by one from the day before to 74, while the number in intensive care rose by one to 12. The number of COVID patients in intensive care included non-Northern Health residents, as only eight residents of the region were hospitalized as of Thursday, the B.C. CDC reported.

On Thursday, Northern Health reported an outbreak at the LNG Canada worksite in Kitimat.

"We have had a number of workers at the site who have tested positive," Henry said.

A total of 14 workers at the camp have tested positive for COVID-19, and 32 workers are self-isolating at the site, Northern Health said.

"Northern Health, LNG Canada, and JGC Fluor have been working together on planning, preparing and implementing COVID-19 measures since early spring and continue to work closely to ensure enhanced control measures are followed, to protect the health of all staff," Northern Health said in a statement issued on Thursday.

On Wednesday, Northern Health announced that a single worker at the Peace Villa long-term care facility in Fort St. John was confirmed to have COVID-19. The staff person hadn't been in the facility since Nov. 10, and there is no evidence of transmission among residents or staff.

"While we all hoped we wouldn't have a second wave... every pandemic we've ever had, had more than one wave," Henry said. "We have seen a significant rise in new cases. Four weeks ago, we were having about 150 cases a day, and I was concerned then. We know our hospitals are getting stretched. This surge in transmission is happening across the province. We need to urgently reduce the level of transmission and new cases in our province over the next two weeks."