Have you seen the faces in the trees at Cottonwood Island Park?

Artist Elmer Gunderson has created a whimsical scavenger hunt of carvings
Sep 14, 2018 8:35 AM By: Hanna Petersen

Dotted throughout Cottonwood Island Park are 20 carvings of faces, whimsical houses and a dragon. They’re the creations of local artist Elmer Gunderson, who has been carving and sculpting for more than 25 years.

“When I carved them, I tried to leave them hidden a bit in the bush, so it’s a scavenger hunt for people to find,” he tells PrinceGeorgeMatters, adding that some of them are getting harder to find because of the brush.

He says now when he walks through the park, he has people tell him to look into the trees because there are carvings there.

“I don’t tell them I’m the carver; I just play along with it. I really enjoy it.”

In 2005, former Mayor Colin Kingsly approached Gunderson with the idea to do some carvings in the park.

“He knew I was a carver and had seen a lot of my work and suggested I go in and do faces in the trees down there,” says Gunderson. 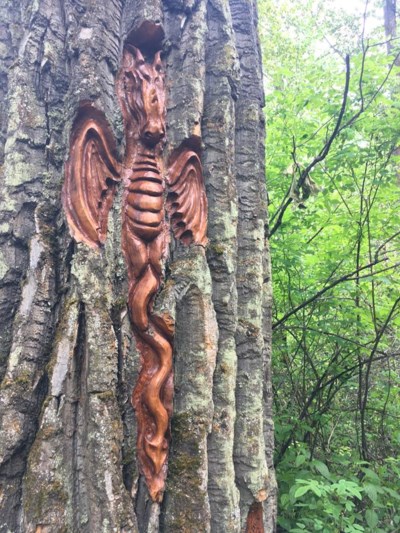 Elmer Gunderson says this dragon is one of his favourite carvings. (via Facebook/Northern British Columbia)

The City of Prince George’s 90th anniversary committee sponsored eight carvings, but flooding along the Nechako River swept two of those carvings away.

Gunderson says it was in Cottonwood Island Park where he taught himself how to carve faces and, although he now mainly works sculpting stone and clay, tree carvings “gave him his roots.”

He says while anything can inspire him, he finds the human face the most intriguing thing to sculpt.

“One year, when I was carving down there, a gentleman stopped me, and we talked for a while, and after he left, I basically carved his face into the tree,” he says with a laugh.

“It’s tough to decide what I want to do in a tree, so it’s just whatever inspires me at the time. It could be a person, or it could be something I’ve seen or felt.”

Gunderson says he’s always had a positive reaction from people when they find out he’s the Cottonwood Island carver.

“It’s been quite a good calling card for me, meeting people on the street and asking if I am the carver. It’s been nice,” he says.

He adds the carvings “aren’t too intrusive because they’re nicely hidden." Some people will walk right by them.

Gunderson likes that he has something of a legacy in one of the major parks in town.

“I grew up in the town. I love the park, and I love Prince George. I love the nature and the people who respect it,” he says.

The artist is grateful for the support he's received from families and businesses in Prince George, not only for the Cottonwood Island carvings but for his own art as well.

“If they invest in local art, I think that is important. We have so much talent here.”

To learn more about Gunderson, visit elmergunderson.com or look for his art at Studio 2880 and at various shops around town.