In May, Heidi De Wildt, 26, and her 27-year-old husband, Richard, decamped from Metro Vancouver, selling their townhome and moving to Prince Rupert on British Columbia's northwest coast.
Jul 22, 2014 6:18 AM By: Frank O'brien 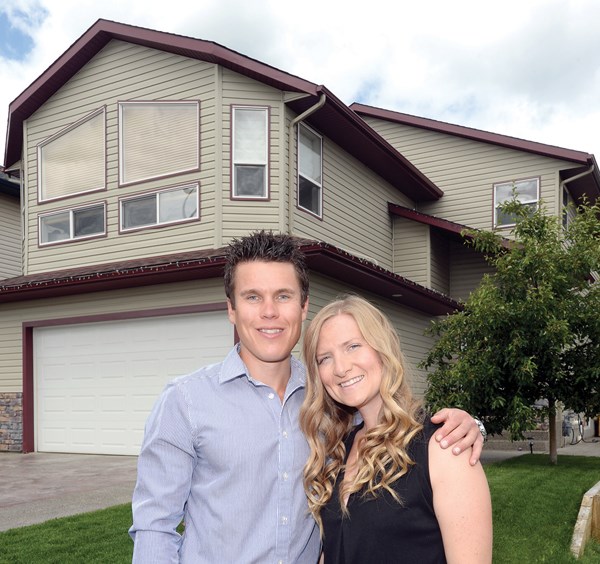 Scott McWalter and his fiancee Crystal Patten outside their Prince George home.Citizen photo by Brent Braaten

In May, Heidi De Wildt, 26, and her 27-year-old husband, Richard, decamped from Metro Vancouver, selling their townhome and moving to Prince Rupert on British Columbia's northwest coast.

While the newlyweds have relatives in Prince Rupert, the moving motivation was strictly financial.

"It is a lot cheaper to live in Prince Rupert than in Vancouver," De Wildt said, adding that they want to raise a family and her husband plans to eventually attend Northwest Community College in nearby Terrace.

The De Wildts sold their Port Coquitlam townhouse for $368,000. They immediately bought a two-storey, four-bedroom house in Prince Rupert for $325,000 - and both have landed jobs in the community.

Scott McWalter, 29, and his fiance, Crystal Paten, 30, have also joined what could become a millennials' exodus from Vancouver, which was recently ranked in a Demographia survey as having the second most expensive housing in the world. The pair bought a five-year-old, four-bedroom detached house in an upscale Prince George neighbourhood after moving from Vancouver this year.

"The mortgage payments are half of what we were paying for rent in Kitsilano," said McWalter, who recently received his MBA from the University of Northern British Columbia in Prince George. "We could have bought good houses here that would have worked out to $600 to $700 per month in mortgage payments."

The $400,000 house they settled on is the type of two-storey, mid-level executive that would cost at least $1.3 million in Vancouver and perhaps twice that in Kitsilano, according to May statistics from the Real Estate Board of Greater Vancouver.

Across the north, the average detached house price is $257,000, yet median family incomes in many northern communities are higher than in the Lower Mainland.

The Northern Real Estate Board's (NREB) housing affordability index, linking incomes to home prices, shows that a typical northern B.C. house purchase would require 31.9 per cent of household income, compared with 81.6 per cent in Vancouver and 67.7 per cent province-wide.

Prince George has an unemployment rate of less than five per cent - the second lowest in the province - and an average house price of around $270,000, Laursen said.

"If you want to work, there is a job for you in Prince George," he added.

The median family income in Prince George is $76,545, compared to $66,300 in Metro Vancouver, based on the 2011 National Household Survey. The gap is thought to be even wider now, due to the increase in high-paying jobs in the north's liquefied natural gas (LNG) industry.

"People come up here and buy a house and in a couple of years they are buying recreational property, because it is so affordable to live here," Laursen said.

Speaking just days after the federal government had approved the $7 billion Northern Gateway pipeline, Laursen said, "There is a buzz in town, a lot of confidence in the economy."

As the largest city in the north, Prince George is the go-to centre for the services linked to the already booming LNG sector, he said.

"We are seeing a lot of professionals, like engineers, being transferred into Prince George."

The veteran real estate agent said that many people who came to Prince George during the last boom in the 1980s planned to stay two years or so. "But they are still here. Prince George is B.C.'s great secret. Once you move in, you don't want to leave."

Like the De Wildts in Prince Rupert, many new northern homebuyers have bought a house with a rental suite to generate extra income. It appears to be a smart strategy in a region with some of the lowest vacancy rates and highest rents in the province.

In Dawson Creek and Fort St. John, near the largest LNG fields, an average two-bedroom apartment rents for around $1,100, according to Canada Mortgage and Housing Corp.'s spring survey - second only to Vancouver. In Terrace, Prince Rupert and Kitimat in the northeast, vacancy rates are below one per cent. The rental shortage is deepened due to gun-shy local builders afraid of speculation in what has traditionally been a boom-bust economy, said Vancouver-based investor Jason Pender.

Earlier this month, there were just 47 homes listed for sale in Kitimat.

Pender's company, Joint Venture Real Estate, is completing the first multi-family project built in 20 years in Kitimat. The project sold out its 36 townhomes in 40 days. All but four of the units sold to out-of-town investors.

The white-hot demand is an indication of the economy in Kitimat, which is a western terminus for LNG shipments and the planned Northern Gateway pipeline. The ongoing $3.3 billion expansion of the Rio Tinto Alcan aluminum plant is a major employer.

"The rental vacancy rate in Kitimat is zero. This is like Fort Mac 25 years ago," Pender said, referring to the Alberta oil-fired city of Fort McMurray. "This is not a boom. It is just a beginning."

31.9%: Percentage of income needed to buy a house in the North

81.6%: Percentage of income needed to buy a house in Vancouver