The B.C. River Forecast Centre has issued a flood warning for the Fraser River at Prince George and upstream. The warning, issued at 3:30 p.m on Tuesday, applies to Upper Fraser and its tributaries from Prince George the Robson Valley.
Jun 30, 2020 5:18 PM By: Arthur Williams 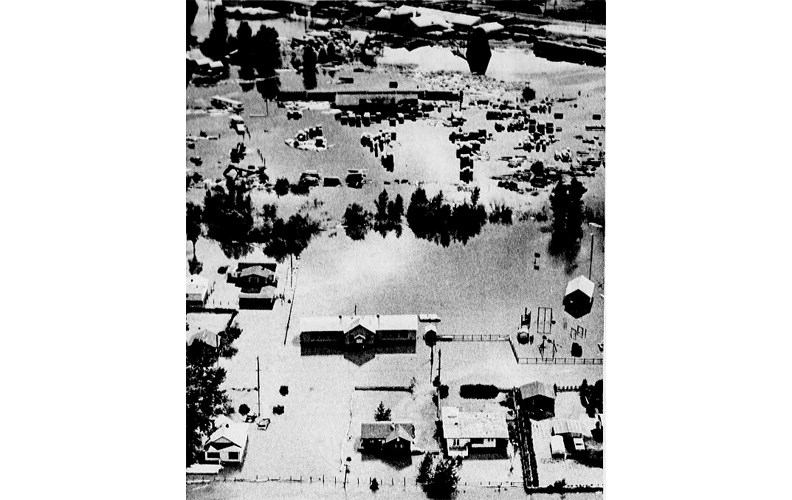 Flooding on Cottonwood Island is seen in an aerial photo taken on June 14, 1972. The head of the B.C. River Forecast Centre is warning the Fraser River could hit 1972-levels this week.Citizen archive photo

The B.C. River Forecast Centre has issued a flood warning for the Fraser River at Prince George and upstream.

Flood watches and high streamflow advisories have been issued for the lower Fraser River, Chilcotin River and its tributaries, including Big Creek and the Chilko River.

"In terms of Prince George, we've upgraded our flood watch to a flood warning for the area at Prince George and upstream," David Campbell, head of the River Forecast Centre, said in a press conference on Tuesday. "We've seen a pretty high flow over the last four days. The current forecast is for upward of even 40 or 50 millimetres of rain."

As of Tuesday afternoon, the river level at the South Fort George measuring station was 8.86 metres, and the water flow at the Shelley station was at 3,420 cubic metres per second. Those levels were between a two-year and five-year event.

"The bullseye of this rainfall is... Valemount, the Robson Valley," he said. "The river is already fairly full. So we are expecting a bump up to the level where we were this weekend."

On June 26, the Fraser River peaked at approximately 9.3 metres at South Fort George.

Depending on how much of that rain falls in the watersheds of the Upper Fraser and its tributaries, water levels in the Prince George area could hit levels not seen since 1972, Campbell said.

"I'd urge the public to use extreme caution around rivers," he said. "Rivers are extremely high and unusually high. We expect a lot of river banks to be extremely unstable."

Campbell also advised residents to avoid boating, swimming or any other water activities because of the danger of debris and other hazards on the water.

Stan Bates, executive director of operations for Emergency Management BC, said the agency is standing by ready to assist communities if flooding occurs.

Emergency Management BC has been in contact with communities and regional districts, and has stockpiles of sandbags, gabions and other flood control measures if needed, he said.

"There is a potential for evacuation alerts and orders to be issued by local authorities," he said.

People who are evacuated will be able to register as evacuees online using the province's new evacuation registry, he added.

For the latest updates on the flood situation, go online to http://bcrfc.env.gov.bc.ca/warnings/index.htm.