Everything you need to know about roller derby in Prince George

Dust off your skates (no, not the ones with blades) because roller derby season in Prince George is about to kick off.

The fast-paced, full-contact sport has a stronghold in Prince George thanks to the Rated PG Roller Derby League and its four teams. After a summer hiatus, the league is back in action returning with a scrimmage Oct. 20 at the Roll-A-Dome.

“It'll be super fun and it’s our first game back from off-season so we're going to be all knocking the rust off of each other,” says Jamie Mault, member of the Rated PG Northstars, who are the league’s internationally competitive women’s team currently ranked 15th in Canada.

Although the first event of the season is just an in-house scrimmage, it will allow the audience to get a taste of roller derby in action.

But wait, what exactly is roller derby? 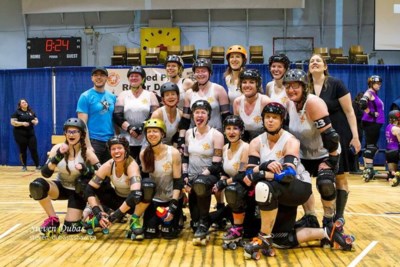 Rated PG Northstars pose together during their 2017-18 season (via Facebook/Rated PG Roller Derby).
A roller derby game is played by two opposing teams who skate around an oval track.

Both teams pick a player called a jammer who scores points by lapping members of the opposite team and each team has four players called blockers who must simultaneously try and stop the other team’s jammer while helping their own.

That's why it's deemed a full-contact sport similar to football or lacrosse.

“It’s a ton of fun to watch, but I would say the first time watching it might be a little overwhelming because a lot of people aren’t familiar with the sport,” says Mault, adding that even if the audience is a bit confused, “It’s still super fun to watch because everybody likes big hits.”

Mault noted that there are a lot of misconceptions about roller derby, including that it’s not a real sport.

“It’s a real and serious athletic sport — it definitely has a past of being 'showy' but modern-day roller derby is 100 per cent real,” says Mault.

In the 1950s, roller derby was known for its theatrical elements that overshadowed the athleticism, but since its revival in the early 2000s, modern roller derby’s focus is on the sport itself.

Derby names, which are nicknames or alter-egos that players adopt, is a throwback to old-school roller derby and is still a fairly common practice.

“It’s just kind of a fun quirky aspect of the sport,” says Mault, who explained that her derby name is Nandicorn, which she acquired when she was 13 through a misunderstanding at her first-ever roller derby practice.

“I said, ‘Are derby names mandatory?’ and somebody misheard me and thought I said, ‘My derby name is Nandicorn’ and I didn’t have a name in mind so I thought I’ll just go with that.”

Mault notes some players and teams who want to be taken more seriously are moving away from using derby names.

The Rated PG Northstars are the league’s competitive team and members of the Women’s Flat Track Derby Association (WFTDA), which is the highest governing body in women’s roller derby.

“It’s a process to become a part of WFTDA team and two years ago we started that process, so we are a now a WFDTA team and ranked on a global scale,” says Mault, explaining they often travel far and wide to compete in tournaments.

“There was a team from Saskatoon, the Lower Mainland, Ferine, Washington and a team from Victoria,” says Mault.

There are over 421 members in WFDTA, and current stats rank the Northstars at 15th in Canada and 179th internationally.

How to get involved with roller derby

Rated PG Roller Derby is running a skater intake program called “Fresh Meat,” which introduces new players to the sport. It takes place at the beginning of the season, so new players can select a team when the league ramps up in mid-November.

“You can never have skated in your life and that’s fine — we will teach you how to skate and we’ll teach you derby skills,” says Mault.

She says one of the best things about roller derby is that it’s not only super fun but it takes her mind off of everything.

“When I put my skates on, whether it’s just a practice or a game, I’m focused on roller derby and nothing else,” says Mault.

Fresh Meat starts on Nov. 1 and anyone interested can come and try it out for free on the first day with no commitment needed. The entire program is 12 weeks and runs Thursdays from 5:30 to 7:30 p.m. at the Roll-A-Dome.