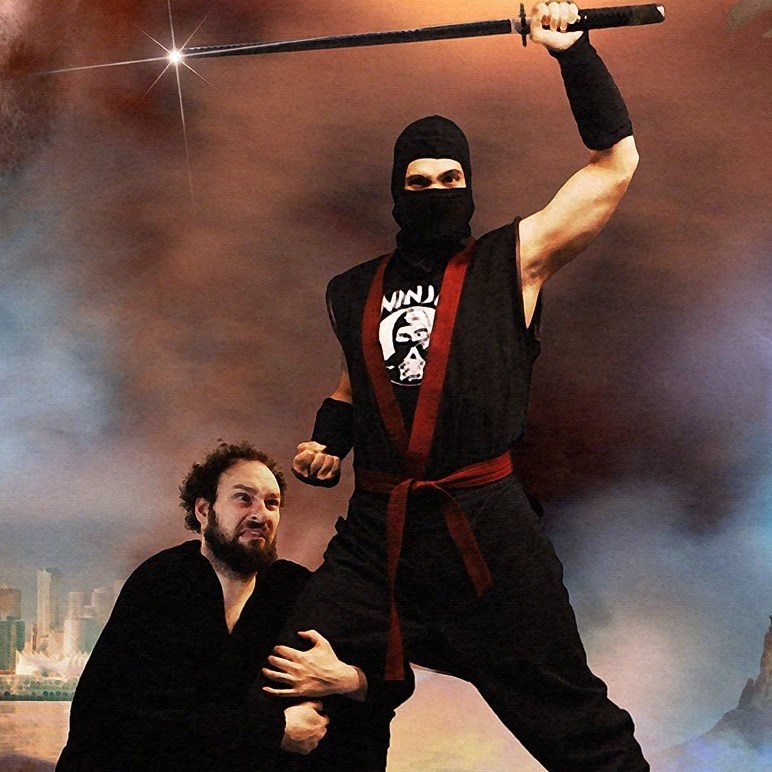 Support from the community has been very positive, according to the two filmmakers. (via Geoff and the Ninja)

The next binge-worthy TV show to catch everyone’s attention might just be Geoff and the Ninja, a sitcom about a guy named Geoff and his terrible roommate.

But Geoff and the Ninja is not only a unique premise for a sitcom, it’s a TV show that was entirely produced in Prince George with mostly local cast and crew.

Co-created by local Jonathan Chuby and his Kelowna-based partner Jeremy Abbott, the show spans six episodes and was inspired by the layered and off-beat humour in shows like Rick and Morty and Arrested Development.

The sitcom’s plot begins when Geoff’s girlfriend elopes with his embezzling boss – a situation that leaves him in emotional and financial ruin. To avoid losing his house, Geoff has to find a roommate. That’s when the ninja arrives in his life and the adventure really begins.

Where did Geoff and the Ninja come from?

The idea for Geoff and the Ninja stretches back to 2006, when the two co-creators lived in Vancouver and Abbott was searching for a roommate.

“I thought about a normal person living with a ninja as a roommate and I couldn't get the idea out of my head, and started writing it and pitched it to Jon a few months later,” says Abbott.

He says they tried to film it as a short in 2007, but realized they didn’t have the resources to pull it off.

After keeping the idea on the back burner for a number of years, in 2014, Chuby and Abbott entered Geoff and the Ninja into CBC’s Comedy Coup Competition, which required creators to produce a video every week for 10 weeks to develop an original show concept.

They made it to the final 15, which was the round just before the final five projects were selected for further funding.

After that intense experience, Chuby says they took a break for a few weeks, before beginning to develop the idea further.

“The idea evolved and got better and we found a better way to write it as a show,” Chuby tells PrinceGeorgeMatters, adding that getting a show picked up in Northern B.C. has a few extra hurdles.

“With us being up here, it makes it more difficult to get it off the ground; but with the way the industry is changing and the way the Internet has changed, it's opening up those corridors a little bit more.”

After deciding to go ahead with the show anyway and setting a filming date, it was then picked up by the Telus Storyhive competition last year. The contest awards production grants, and upon completion, those projects are broadcast across select Telus platforms.

“We have been doing a lot more hustling to make it happen, and we ended up getting one of the biggest grants they give out,” Chuby says of the $60,000 they received..

Although their script was ambitious given their budget and time constraints, Chuby and Abbott say filming in Prince George helped them pull everything off.

“In places like Vancouver or Toronto, it’s a lot more expensive to pull these things off, where in Prince George, especially with the connections we have and favours from people, we were able to do things we never would have been able to in a bigger city.”

He says people were eager to let them borrow trailers or let them film in their backyards. Some even volunteered to be an extra in the show.

“It was always really greeted with open arms,” says Abbott, adding “every business we worked with and every person who worked with us were really excited about it happening.”

He says even though they didn’t think a franchise like Carl’s Jr. would be on-board, the owner eagerly agreed to let them film a scene in the restaurant.

“The reception within the community in Prince George, as far as getting it done, was awesome, so hopefully they will receive the finished project as well,” says Abbott.

Chuby and Abbott say there are a lot of subtleties in the show and fan-favourite characters that make the show primed for re-watching.

“We are paving the way for where we want to go with the show. We are just getting to know Geoff and the Ninja by the sixth episode and getting into that world,” says Chuby, adding they already have the next six episodes written and a plan for a four-season arch.

Chuby says he thinks there is a lot starting to happen within the filming community in Prince George, and he hopes Geoff and the Ninja will open up more doors and opportunities.

“We are hoping that our show can be the first, because there has never been a TV show that is local up here, so hopefully being the first of its kind we can keep that going, and hopefully get picked up by a bigger network to build that infrastructure up here for future projects.”

Where can you watch Geoff and the Ninja?

Geoff and the Ninja will premiere at the Prince George Playhouse (2833 Recreation Pl.) on Sept. 29 in a special showing of an all directors-cut edition of all six episodes.

After the premiere, the episodes will be available through Telus Optik TV and will be accessible to Telus subscribers.

The episodes will also be posted to the Telus Storyhive YouTube channel and cross-posted on Geoff and the Ninja’s Facebook page, where all of the latest updates and information on the series can be found.