Economic diversity ready to touch down in North

The future of Asia-Pacific trade is up in the air, but down on the Prince George ground, the runway to prosperity has been cleared for takeoff.
Dec 20, 2014 10:10 AM By: Frank Peebles 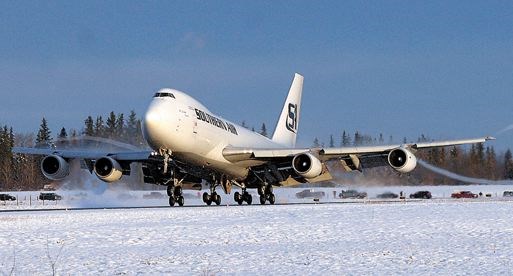 The first 747 cargo plane to arrive at the Prince George Airport touches down on Nov. 17, 2009.Citizen file photo

The future of Asia-Pacific trade is up in the air, but down on the Prince George ground, the runway to prosperity has been cleared for takeoff.

The final goal for the Prince George Airport (YXS) started in 2006-07 with construction of the third longest runway in Canada (11,450 feet long and 150 feet wide).

The expansion project for runway 15-33 started with big fanfare and controversy over why a city as small as Prince George would need such a piece of infrastructure. Those involved in national economic strategies and foreign trade policy never balked, however. They knew this was a strategic play to win long-term national investment, diversify the northern B.C. economy, and create sustainable jobs outside of the natural resource sector.

Some of the other goals were arrival/departure improvements, traffic flow, getting international customs services, and making that tarmac long enough to handle trans-oceanic planes. Building the connection route (Boundary Road) between the city's other cargo transportation modes (major highways, the converging rail lines) was another major step on that long walk.

None of it meant much without a refuelling apron, however. Those kinds of planes require particular kinds and quantities of fuel that YXS could not provide until this past year when that last piece of the infrastructure puzzle was put in place.

This sector of the industry alone - the refuelling flyby - can be lucrative for any airport. It can bring exponential benefits for an entire community when the refuelling is also part of the loading and unloading of passengers and cargo.

"We will be building up the number of companies putting fuel into the tanks and marketing ourselves to land more planes here for refueling," Gibson said. It is hard to understand for the average person who sees planes at all manner of airports fuelling up as part of their routines, but Gibson explained that this is usually done by private sector interests who rent space from the airport.

"Airports don't normally fuel up airplanes so we are breaking some ground here by building this service ourselves, but it will be of benefit to all the air carriers and stimulate the rest of the business we hope to have. It is unusual but it is all going according to plan."

With the CN Rail inland port at the downtown rail yard, the train tracks that intersect here from all directions, the highways that intersect here from all directions, and Prince George's geographically advantageous position between the Asian and North American consumer markets, it makes economic logic to also have a well-provisioned YXS. The movement of products is helped by all three modes interlocking in one place.

But for that to happen, one more item is still on the YXS wish list. Again, it is something normally built by the private sector, and so not an item the owners of an airport would typically build themselves: storage.

The privately owned property along Boundary Road right next door to the airport is zoned for future logistics buildings - the warehouses in which shipping companies store and sort their incoming / outgoing wares - but there is no indication any such buildings will be set up in the short term. So, like the fuelling apron initiative, the airport itself is taking steps to spark that fire.

"It is not normal for an airport to provide cargo facilities, but we need to stimulate that sector, so we are in talks to match up with the right partners," said Gibson. "We are in negotiations to do with cargo property development on our own property. That'll start to anchor down the rest of that side of the business. We are just trying to find the right partner."

With the past several years devoted to positioning the airport for international trade, some of the YXS basics have been deferred down the priority list. Gibson said they could no longer ignore some of those.

"We are gearing up to rehabilitate our cross-wind runway (06-24), and install a new lighting system there, because it hasn't had a significant upgrade since 1983," he said. "We have done basic maintenance, but if you don't eventually grind down and resurface the whole thing, you get degradation of the subsurface and then all kinds of expensive problems emerge. We are at that point, so we want to be on it now."

The resurfacing will cost between $7 million and $8 million, while the new lighting will cost another $2 million or so.

For a top-end estimated cost of $10 million, an airport can connect the community to the world, said Gibson, while the same investment only covers a few kilometres of railway or highway. He stressed, though, that the air industry needs the close partnership of road and rail stakeholders. He is concerned, as are his counterparts at similarly-sized airports across Canada, that the money collected by the federal government at their door is not returned to them for purposes like common infrastructure needs.

"We are in a user-pay system even if the States is a highly subsidized system," he said, pointing out the uneven playing field to compete with airports like Anchorage and Seattle. "Airports in Canada pay close to $300 million per year in rent for the federal land we are on. It is a tax on gross revenue, is the model being used for that, which is a bit cock-eyed in our opinion. But regardless of the formula, we ask are we getting maximum value for that $300 million? No, we don't believe we are. We want to see the formula changed and we want to see that money turned around and used for airport infrastructure as it was supposed to be all along, since that benefits the national economy directly."

In spite of these funding challenges, YXS is growing. The number of passengers through their doors in 2014 is expected to surpass 440,000 and with the Canada Winter Games pumping thousands of otherwise unscheduled passengers over the YXS threshold, the 2015 numbers are expected to be even better.