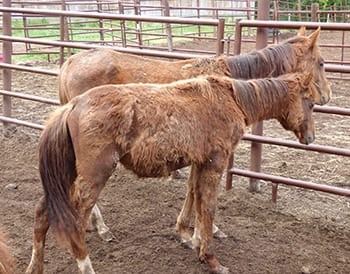 Horses after being held in captivity (via BC SPCA)

A 25-year-old convicted of animal cruelty alongside her mother will go to trial in May.

Catherine Adams was originally scheduled to appear in court on Dec. 10, 2018, but the date was pushed back yesterday (Jan. 15) to May 16, according to B.C. Court Services documents.

Her mother, Karin Adams, and Catherine plead guilty to animal cruelty charges in 2015 after a 2014 BC SPCA investigation.

The SPCA also removed 104 fish that were kept in "filthy conditions."

Catherine plead guilty in 2015 to charges under the Criminal Code of Canada as well as the Prevention of Cruelty to Animals Act and was handed 15 days in jail, a 20-year ban on owning animals, a six month, conditional house arrest, and two years' of probation from the judge.

Her mother also pled guilty to causing or permitting an animal to be in distress.

The judge in the case also ordered each of them to pay $5,456 each in restitution to the BC SPCA to offset the animals care costs.

The horses, in particular, were kept in what the BC SPCA called "deplorable conditions" with overcrowding, inadequate and unsanitary shelter and little or no access to food.

“Many were underweight and several had overgrown hooves and suspected parasites,” Marice Moriarty, Chief Prevention and Enforcement Officer or the BC SPCA said in a release.

She also noted that two of the horses were so malnourished that they had been eating a large section of wood from the back wall of a shed in an attempt to survive.

The dogs included German shepherds, poodle crosses, two Chinese crested dogs, a Newfoundland-cross, a pit bull, a Maltese cross, and a bloodhound cross were also in unsanitary conditions including dental issues, medical concerns which ranged from lacerations to extreme matting, the SPCA said.

The dogs also appeared to be fearful and poorly socialized.

On Jul. 4, 2018, the SPCA once again found 16 dogs in distress on a property in Quesnel. German shepherd, a Yorkshire terrier, a retriever, bull terriers, standard poodles, Portuguese water dogs, a Penkingese, corgi-border collie crosses, and miniature pinschers were all in crates too small for their sizes and were also in a poorly ventilated area, with little or no access to water and feces/urine soaked matting.

“It is extremely frustrating when we deal with repeat offenders, particularly those who breach the terms of their sentencing,” Moriarty said in another release.

“However, we are pleased that these dogs are now safe and are getting the attention and care they need.”

The pair had also been convicted in Alberta for prior animal cruelty offences.

Catherine Adams will have her trial in Quesnel begin in May for allegedly breaching her probation orders since she was prohibited from owning or having custody of an animal.