Grasshopper Retail Inc. gets the green light, while Kush Kove gets the brakes

One independent Prince George cannabis shop is getting the green light, while another has hit a major roadblock during the public hearing process.

Kush Kove, the store at 1239 Third Ave. proposed by pharmacist Nasser Kamani, was denied a temporary use permit because of its proximity to Intersect Youth and Family Services, while Grasshopper Retail on George Street has been approved. 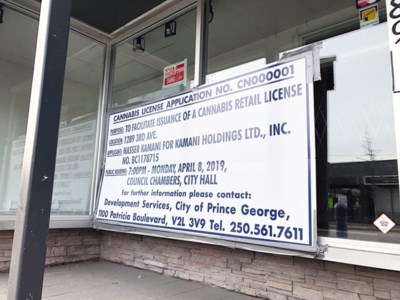 Kush Kove's proposed location. (via Jessica Fedigan)
Both businesses were advised to apply for a three-year temporary use permit, so the city could have time to better understand the impacts on downtown Prince George before permanent rezoning is considered.

However, this particular application received passionate opposition from many Intersect employees, who had both written letters and attended the public hearing to voice their concerns.

“This is right across the street from a children’s mental health organization with a school on site. I just think the optics are somewhat difficult,” said Robert Rail, a former executive director at Intersect.

“We don’t have the research to be able to say, what is the impact on the surrounding community particularity as it pertains to child and family services in such close proximity.”

Intersect is a non-profit organization that runs counselling services for youth under the age of 19 who struggle with mental health and addictions problems, and also runs a school for about 30 children from grade eight to 12 who can’t attend mainstream school.

“I get that we are talking about a temporary use permit but I’d like you to stop and think what message that you’re sending this community about child and youth mental health if this is approved,” said Intersect counsellor Melissa Finger, who works with youth battling addiction.

“You don’t think it sends a message to my client, who I just talked to about reducing their use, as they walk out front and have a store literally across the street.”

Shannon Croy, current executive director at Intersect, also spoke out against the application.

“I wouldn’t want a liquor store across the street from us either,” said Croy. “The fact that our kids aren’t able to attend a mainstream school because they already have an existing mental health or substance abuse issue, they need to be afforded even more protective measures not less.” 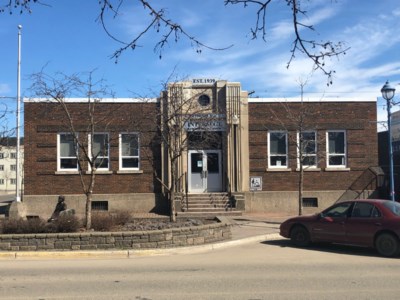 Intersect Youth and Family Services on Third Ave. (via Hanna Petersen)
The speakers’ statements had an immediate impact on the councillors' decision whether or not to approve the temporary use permit.

“I have an opinion but I come in with an open mind, and I’m open to persuasion, and tonight I have been persuaded to not support this temporary use permit just for the fact that Intersect is across the road,” said Coun. Skakun.

A similar statement was expressed by many councillors, and everyone with the exception of Coun. Terri McConnachie, voted to deny Kamani the temporary use permit.

While this location was ultimately denied, the story was not the same for Grasshopper Retail Inc.

Two people did speak out against Grasshopper Retail Inc., which has applied for a temporary use permit for 421 George St. across from the Ramada Hotel, but this location was approved unanimously by council.

“They are going to be investing in the downtown they are not right across from a school, they have done their homework and again it’s a temporary use permit,” noted Coun. Skakun.

“I think a temporary use permit is just that - temporary and it will answer a lot of questions, whether that is increased police presence or increase crime,” added Coun. Cori Ramsay.

Later on in the meeting, the final reading and adoption of a rezoning bylaw that would allow for a retail cannabis shop at Pine Centre Mall (3055 Massey Dr.) was also approved.

This means so far Prince George has approved two B.C. Cannabis shops (one in College Heights and one in Pine Centre Mall) and one independent cannabis shop downtown.

Retail cannabis shop could blaze its way into downtown Prince George
Mar 26, 2019 10:47 AM

Industrial cannabis production facility in the works for Prince George
Mar 12, 2019 10:51 AM