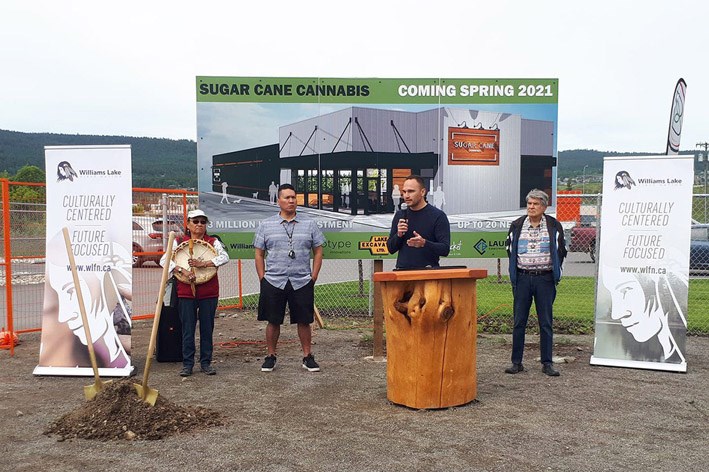 During a groundbreaking ceremony Monday, June 22, Williams Lake First Nation Chief Willie Sellars said it has been a long time coming to see provincial and federal governments stepping out and supporting projects like Sugar Cane Cannabis. "The magnitude of the funding agencies we've been able to pull together, the support from the province and the federal government on something that's going to be the first of its kind is very exciting." (Rebecca Dyok photo)

A ceremony was held under cloudy skies Monday morning on reserve lands within the city of Williams Lake for Sugar Cane Cannabis that will open in spring 2021.

“The project we’re here to break ground on is an exciting one and one that has been in the planning for more than a year and a half,” Kukpi7 (Chief) Willie Sellars told the crowd.

State-of-the-art, the 7,000-square-foot facility will allow customers to purchase high quality cannabis directly from the facility where it will be grown.

“It will be, to the best of our knowledge, the first such Indigenous-owned facility in Canada,” Sellars added, noting it will provide up to 20 new jobs.

Support for the $3 million-facility has come from a number of funding entities including $500,000 from the B.C. Government as well as $250,000 each from Indigenous Services Canada and Northern Development Initiative Trust (NDIT).

The remainder of the project will be funded directly by the Williams Lake First Nation through its own source revenues, Sellars said.

“Williams Lake First Nation is proud to be a business leader and the people of this town should also be proud that they are part of something that is special and unique.”

Saying she was wearing two hats, chair of NDIT and Cariboo Regional District Margo Wagner said the creation of the facility highlights the start to rebuilding the economy that has faced chaos as result of the COVID-19 pandemic and extreme weather, and adversely impacted by mill closures and wildfires.

“We know for many years that Indigenous people have faced obstacles to prosperity due to circumstances outside of their control,” Wagner said.

“A diverse local economy capitalizing on new opportunities with Indigenous businesses playing a key role can offer a way to address all of those concerns.”

Kukpi7 (Chief) Patrick Harry of Stswecem’c Xgat’tem (Canoe/Dog Creek) that is exploring a cannabis operation of its own congratulated the Williams Lake First Nation on the facility, as well as the name change.

Harry noted the great deal of trauma Indigenous peoples have experienced and said it was important to note the medicinal purposes of cannabis.

“When I look at Indigenous Bloom and I look at this new facility I see a really great opportunity to provide medicine to our people and to the Secwepemc people of Williams Lake First Nation and to the surrounding community here,” he said.

One representative from the City of Williams Lake was in attendance: Coun. Scott Nelson.

Sellars noted efforts to get the project off the ground have not been without challenges — the most significant he said being the relationship with the City.

He called Nelson’s attendance as a big step for the City and said it gave them hope the City and rest of city council will sit down with them so they can move forward in collaboration and partnership to do good for the region.

“In order for the Williams Lake First Nation to excel we also need the city of Williams Lake’s support,” Sellars said.

“We’re committed to Williams Lake First Nation members but we’re also committed to the betterment of the Cariboo Chilcotin.”

Sugar Cane Cannabis will be built in partnership with numerous local businesses and subcontractors including Lake Excavating and Lauren Bros Construction.

The interior of the retail space will be designed by Rena Johnson of The Rusty Bucket who has worked with the nation on a number of projects including their government office in downtown Williams Lake.

The facility’s architectural design will be co-ordinated by Genotype Innovations from Kelowna.