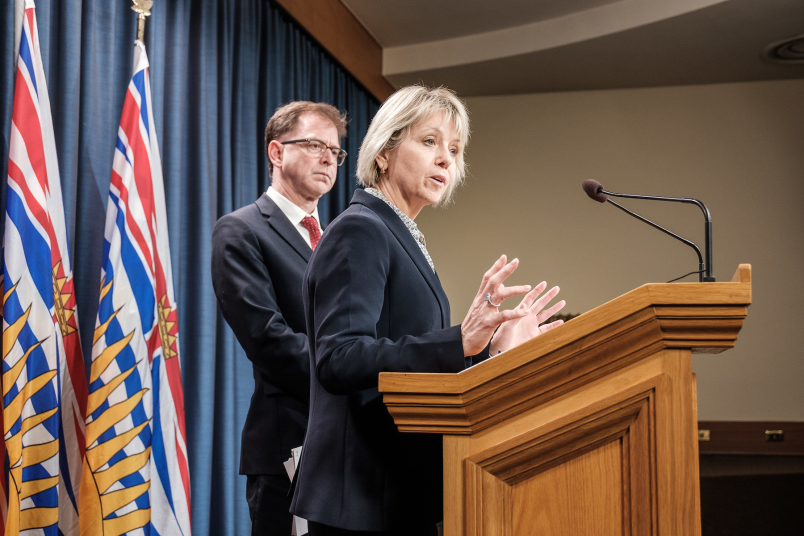 Dr. Bonnie Henry said Saturday she does not know exactly what the province’s COVID-19 testing capacity is or the exact backlog of tests needed to be processed. (via Government of British Columbia)

COVID-19 numbers in B.C. saw some good news with a drop in cases, but Dr. Bonnie Henry has now issued new restrictions and orders throughout the province.

This afternoon (Nov. 19), Henry announced another 538 positive cases in the past 24 hours for a new provincial total of 24,960 since the pandemic struck in January.

Out of the newly recorded cases, the provincial health officer said Northern Health tallied 11 for a new authority total of 563 since March.

Active health monitoring is now at 9,977 people who have recently come into contact with someone previously infected with the virus, while 17,207 have recovered.

One new virus-linked death has happened in the past day, which brings the new provincial fatality rate to 321.

Henry announced this afternoon (Nov. 19) the orders previously applied throughout Fraser Health and Vancouver Coastal Health are now being applied to every authority in B.C. for the next two weeks ending Dec. 7.

Henry also made a shocking announcement in issuing an order approval to the Public Safety and Solicitor General that will mandate masks to be worn in all indoor public and retail spaces after businesses asked her for stricter guidelines.

This means both employees and customers will be required to wear face-coverings when visiting a business except when doing activities like eating or drinking.

Masks do not need to be worn while sitting at work at your desk but must be worn in public corridors such as hallways and elevators.

The original orders for the Fraser Health and Vancouver Health regions were supposed to expire on Nov. 23 at noon.

Travel anywhere in B.C. is also postponed for the next two weeks as well, with officials saying only essential, necessary travel should happen.

All community-based social gatherings or events are also suspended under the order including those with less than 50 people. Henry also said places of worship are to have no in-person group services.

Weddings, baptisms and funerals are still allowed to happen in places of worship with less than 10 people; no gatherings are allowed after such events.

The recent rise in the north promoted the regional authority to issue a statement on Nov. 17, asking residents to adhere to provincial rules and guidelines as its concern had grown over the amount and frequency of new cases.

3/3 We are encouraging against non-essential travel and are asking people to ensure they are following all of the current orders, guidance, and advice.

"Recent orders in the Fraser Valley issued by Provincial Health Officer Dr. Bonnie Henry to address cases in the Lower Mainland are not currently directed at Northern Health," on Nov. 17 read.

"However, we need your support to avoid more stringent measures. We are encouraging against non-essential travel and are asking people to ensure they are following all of the current orders, guidance, and advice."

In the Nov. 17 written update from provincial health officials, Henry said an uptick in cases on Vancouver Island, in Interior Health and in the north had been caused mainly by travel to and from the Lower Mainland.

An outbreak was declared at Peace Villa in Fort St. John yestersday, according to Dr. Henry.

Northern Health says it is implementing enhanced COVID-19 precautions at the Peace Villa care home following lab confirmation of a single COVID-positive case in a worker at the site.

The health authority said Wednesday afternoon that medical health officers have declared a facility outbreak, and that communication with Peace Villa staff, residents, and families is underway.

Northern Health said it was declaring the outbreak as a precaution, and that the declaration will be in place until at least Nov. 25, which is 14 days after any potential exposure to the confirmed case within the facility.

"At this time, there is no evidence of transmission of illness among staff or residents within the Peace Villa facility," the health authority said in a statement.

"In this case, it is a single lab-confirmed case in someone who worked during their potential infectious period."

Another outbreak has also been declared at the LNG Canada Project Site in Kitimat.

Northern Health says 14 employees have tested positive for the virus and the outbreak is contained to the general work location. There are 32 employees in self-isolation at the site while the remainder is self-isolating in their home communities.

"Northern Health, LNG Canada, and JGC Fluor have been working together on planning, preparing and implementing COVID-19 measures since early spring and continue to work closely to ensure enhanced control measures are followed, to protect the health of all staff," the bulletin says.

"Northern Health is working with the BCCDC to ensure communication with the health authorities or jurisdictions of the affected employees’ home communities."

The outbreak notice will be in place for a minimum of 28 days.

With B.C.'s COVID-19 situation becoming direr, Premier John Horgan made an appearance in front of the media yesterday (Nov.18), saying Dr. Henry would have more details today on orders, restrictions she was preparing while urging residents to not partake in any non-essential travel.

"This is not the time to go storm watching on the West Coast of Vancouver Island," he said.

"This is not the time to be making plans for large gatherings at Christmas. If you're not required to travel, you shouldn't travel."