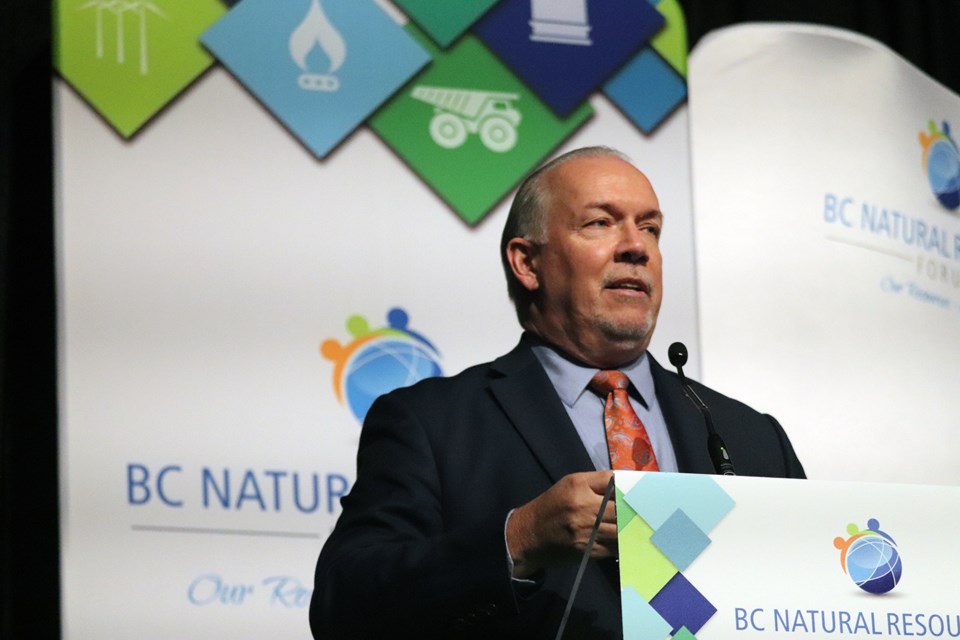 A downturn in British Columbia's lumber industry is a chance to refocus on getting more money out of provincial forests, Premier John Horgan said Friday.

He told hundreds of delegates at the annual convention of the Union of B.C. Municipalities that the forest industry has focused for too long on sending raw logs offshore without adding value.

Dozens of forest companies have closed or curtailed operations in B.C. over what Horgan said is dwindling supply and an operating model that moves timber to market without tending to a renewable resource.

He said the province has less fibre because of fires, pine beetle infestations and an operations model that gets timber cut and to market as fast as possible.

Instead, the focus needs to be on the renewable resource over the long term, Horgan said.

Earlier on Friday, convention delegates approved a motion asking the province to reconsider its decision to transfer $25 million in funding from an economic development program for rural communities to a support program for forest workers.

The government announced a $69 million aid program last week for communities and workers hurt by the industry downturn.

Horgan said the funding diversion is not a cut and is intended to help people and communities in difficulty.

"We are feeling pain in the communities, we need to band together and that's why we curtailed the rural development fund so we can focus direction on people who are in distress," he said.

The B.C. government's website says the Rural Dividend Program has been suspended for the year, not cancelled. The fund supports small and Indigenous communities in diversifying their economies.

Horgan told the crowd the money would be reinstated as the province monitors the forestry aid program.

During a news conference after his speech, Horgan said the fund is oversubscribed and many applicants could be more appropriately served through other portfolios. Applicants for water treatment funding for example could be better served through major infrastructure investment budgets, he said.

"We're trying to marry up some of those applicants with more appropriate funds that are cost shared with the federal government as well," he said.

The premier said he met recently with five CEOs of the major forest companies in B.C. and they had a candid discussion.

"It's hard for me to listen to companies say they're in distress when they're making multimillion-dollar investments in the United States and Europe and around the world."

He said he wants the forest industry to be successful.

"It's not about reducing their ability, it's about opening opportunities for markets and that's why I'm so excited about cross-laminated timber," he said, referring to wood product that can be used for construction of highrise buildings.