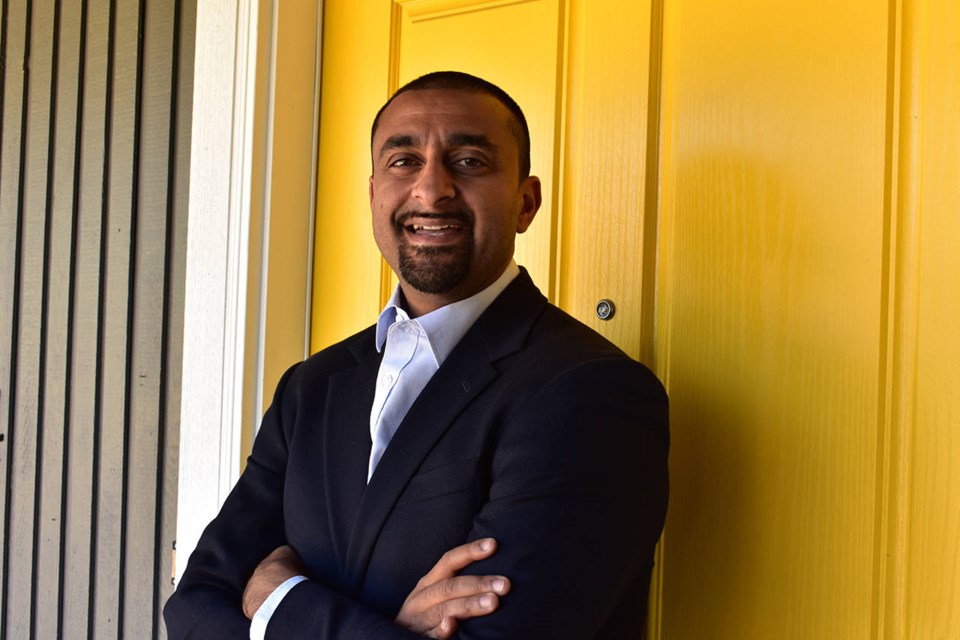 Despite an overall rise in unemployment in the province, Ravi Kahlon, B.C.'s minister for jobs, economic recovery and innovation, is encouraged by the declining number of COVID-19 infections. Winning the fight against the pandemic is key in province's economy regaining its strength.Surrey Now Leader photo

Relief is on the way for restaurants, bars  and fitness facilities in B.C. feeling the pinch of heath orders that took effect two weeks ago, which limit in-person dining and group exercise activities.

But it’s not going to help employees of those businesses who have been laid off their jobs while the province continues to enforce tough restrictions to combat increasing COVID-19 infection rates in the third wave of the pandemic.

The $50 million Circuit Breaker Business Relief Grant announced by B.C. Minister of Jobs, Economic Recovery and Innovation Ravi Kahlon on Thursday will be drawn out of the $345 million small- and medium-sized Business Recovery Grant. It offers a one-time payment of between $1,000 and $10,000 available to businesses that offer food/liquor service and fitness activities to cover wages, rent, supplies, insurance while their usual sources of income have been disrupted due to the temporary health restrictions now in place. The grant amount depends on the number of employees. Most businesses will be eligible for a $5,000 payment.

Eligible businesses must have been in operation as of Feb. 1 and each will be required to show in the application a business/liquor licence, their number of employees, and direct-deposit banking information. Businesses in operation prior to the pandemic can use their pre-pandemic employment numbers.

“It’s a one-time grant, we heard clearly people didn’t want any more loans,” said Kahlon. “It is a very simple process for businesses to apply, they can start applying next week. We’re hoping within a couple weeks businesses will start seeing money in their bank accounts.”

Todd Stone, BC Liberal Critic for Jobs, Economic Recovery and Innovation, says there’s no new money to help businesses survive and wonders why it will take weeks for them to receive Circuit Breaker funding and why the program was not put into effect when the latest restrictions were introduced on March 28.

“John Horgan should have announced new funding to support struggling small businesses, ensured that the funding was in place on the same day as the recent health orders were announced, and fixed his botched business recovery grant program,” said Stone. “Catchphrases don’t cut it anymore. It’s time for the NDP to stop bungling and provide meaningful relief for businesses and people in need.”

While owners of restaurants, bars, breweries, wineries and gyms continue to the face challenges of pandemic shutdowns that cut off cash flows and threaten the survival of their businesses, the Prince George economy continues to show healthy signs.

In Prince George, an average worker is earning more than they were pre-pandemic, because we’ve lost some hospitality jobs, which are usually lower-paying jobs, and we’re gaining higher-paying jobs, which is a promising sign for the region.”

Unemployment in the Cariboo region fell from 8.7 per cent in February to 6.8 per cent in March. The Northeast was the only other region in the province with less unemployment month-to-month, dropping to 4.1 per cent from 4.2 per cent in the Labour Force Survey.

The local economy is being fueled by a busy construction industry, record-high lumber prices for local sawmills and continued movement of goods along the rail line from the port in Prince Rupert. The hospitality and tourism sectors continue to face difficult times. B.C. has had record daily rates of infection the past week as COVID-19 variants continue to plague the country.

“Decision making in a pandemic is very difficult and we knew from the beginning B.C. health and B.C. economy are going to go hand-in-hand,” said Kahlon. “So our ask continues to be, please avoid gatherings with people outside of your bubble. The virus is out there and it’s in every community in this province and we need people to hunker down for the next little while, while the vaccines are being rolled out.”

There were 1.5 million unemployed Canadians in March, an increase of 371,000 from the previous month. Compared to February 2020, just before the pandemic began, there are an estimated 296,000 fewer people working in the country and 247,000 people working half the usual amount of hours per week. There were 303,000 new jobs added in Canada a 1.6 per cent increase from February. Of that total, 175,000 were full-time positions and 128,000 were part-time.

In B.C., the unemployment rate remained unchanged from February at 6.9 per cent. The provincial jobless rate was at 8.0 per cent in January. Nationally, the unemployment rate in the March survey dropped from 0.7 per cent to 7.5 per cent. The survey is a snapshot taken the week of March 14-20 and it does not reflect the new B.C. health orders which ban in-person dining in restaurants/bars and group fitness activities, which took effect March 30.

“The month of March was promising and we  know there’s going to be some challenges ahead with the restrictions that have come in place,” said Kahlon. “It’s hard to crystal-ball what that will show, but we know there will be an impact. When you eliminate in-person dining, of course it’s going to have impacts on job numbers.

“My biggest concern is trying to keep our businesses going. They’ve worked so hard to make their businesses safe and make the protocols for their employees safe and our hope with the circuit breaker grant is to be able to help them a little bit just to get through this challenging time.”

B.C.’s economy added 35,000 jobs from February, a net increase of 1.3 per cent in total employment. While the province gained 41,800 part-time jobs, primarily in health care, social assistance, manufacturing and construction, it lost 6,700 full-time positions. Kahlon said B.C. is the only province in Canada with more jobs than there were before the pandemic, which he said proves the support programs in place to keep people employed are working.

Stone disputes Kahlon’s assertion and says the province still has 39,700 fewer jobs than there were before the pandemic and that the private sector is bearing the brunt of that burden with 42,900 fewer jobs than there were in February 2020. Stone said young women aged 15-24 have been hardest hit by the pandemic, with 12.9 per cent unemployed, compared to 6.7 per cent of young men. He also says 53 per cent of B.C. residents are an estimated $200 away from not being able to pay their monthly bills.

‘”These numbers don’t provide a lot of hope as many British Columbians are living paycheque-to-paycheque,” said Stone, in a prepared statement. “Bear in mind that (the Labour Force Survey) results don’t reflect the impacts of health restrictions that have blindsided the restaurant and hospitality industry, which is still down 25,000 jobs from February. Sadly, the NDP government’s support for people who have lost jobs has been abysmal.”