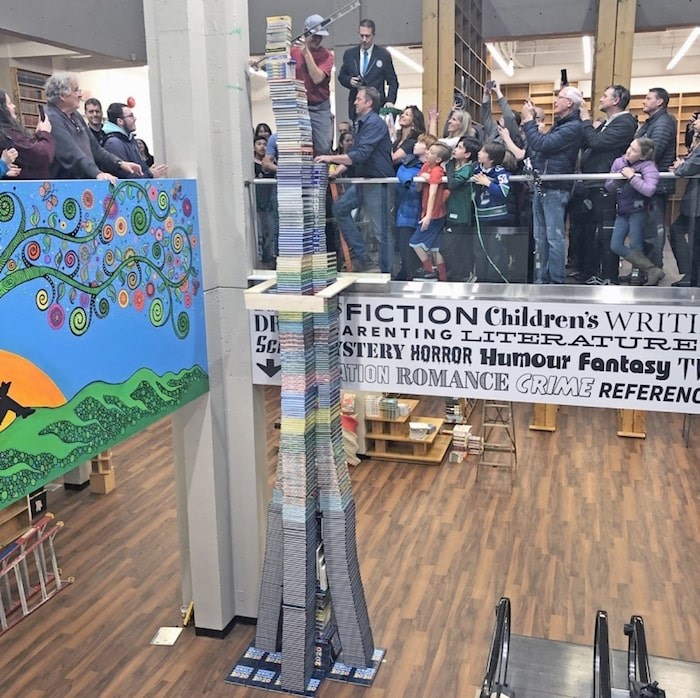 The new location for Russell Books was the scene of a world record Thursday as about a thousand books were used to make a tower six metres high (19 feet, eight inches) in front of a cheering crowd.

All were copies of Guinness World Records books dating back as far as 1962.

“That was a big challenge, a huge challenge,” said Russell Books co-owner Andrea Minter. She said was kicking the idea around for a couple of years before going ahead with the feat.

Guinness World Records adjudicator Philip Robertson was there to present Minter with an official certificate minutes after the five-hour effort was complete.

He called the record-setting result “remarkable.”

Robertson said he was pulling for the stackers.

“I’m not allowed to coach or assist in any way but I was willing you to success,” he said.

The official record is for the tallest tower of Guinness World Records books, something that had never been tried before. The Guinness people decided that the Russell Books tower would have to be at least six metres high to establish a benchmark.

The other book-stacking marks that have been set are the tallest pyramid of books, made up of 144,000 books, and the tallest stack of books at 12 metres.

Robertson explained that a stack is a single column of books while a tower has to have a single base layer that can then be extended into tiers and into a single column. In this case, multiple piles set up on the base provide some stability before they are joined into a carefully shaped top portion.

The record-setting event was part of opening activities for the new location of Russell Books at 747 Fort St.

Work on taking the tower down started almost right away because of concerns about its stability. An official count of the books used could follow.