A Calgary-based company intends to build a $5.6-billion petrochemical plant in the BCR Industrial Site.
Jul 24, 2019 4:54 PM By: Mark Nielsen 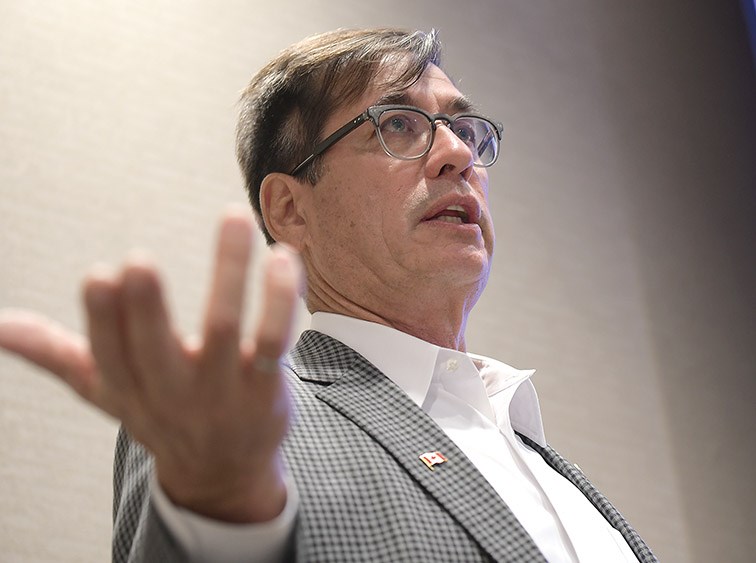 Ken James from West Coast Olefins speaks about taking first steps towards the construction of a $5.6 billion petrochemical project in the BCR site.Citizen photo by Brent Braaten

A Calgary-based company intends to build a $5.6-billion petrochemical plant in the BCR Industrial Site.

Unveiling the plan Wednesday to about 50 people who attended a gathering at the Courtyard by Marriott, West Coast Olefins CEO Ken James said the company has secured a 300-acre site at the BCR Industrial Site to pursue the project.

If all works out, a fully operating facility will be up and running by the end of 2023 and employ as many as 1,000 people in permanent, highly skilled jobs. The feedstock would be natural gas supplied via the Enbridge West Coast pipeline.

"This will be the biggest project the city has ever seen," said James, who lived in Prince George from 1974 to 1984 and highlighted the city's access to the CN Rail line to Prince Rupert, availability of land and proximity to the pipeline as three reasons why the city was chosen.

Steps still to be taken include clearing the provincial environmental assessment process, which will include a public consultation period. The project's value components will be submitted to the B.C. Environmental Assessment Office by the end of this year.

Pending a final investment decision at the end of 2020, construction at the site is to begin in spring 2021.

And once operating, about $50 million per year would be spent on maintaining the facility.

A recovery plant will take ethane, propane, butane and natural gas condensate from the natural gas retrieved from the pipeline. In turn, an ethylene plant would produce one million tonnes per year of polymer-grade ethylene and a polyethylene plant would, in turn, covert most of that ethylene into raw plastic that would be shipped to Asia where it would be used to make finished products.

The distance to Asia from Prince Rupert is about half that from the U.S. Gulf Coast, James noted. Another competitive advantage, said James, is a supply of cheap Canadian natural gas, its price driven down by the shale gas revolution in the United States.

He said a plant in Prince George will have a $250 per tonne advantage over product produced in the U.S. Gulf Coast and $50 to $75 per tonne on product produced in Alberta. James said as many as five more petrochemical plants will be built in B.C. over the next 20 to 30 years and added there is room for three plants in total at West Coast Olefins property at BCR.

"This will totally change the economy here," he said.

In scrum with local media, James said he is "over 50 per cent confident" that the project will go ahead. That may seem pessimistic, he added, but noted that only one of the several liquified natural gas plants that have been proposed for B.C. is progressing.

"So I'm very confident," James said and alluded a statement he made during his presentation that the level of cooperation he has had from all levels of government rivals what he has seen in Alberta.

James, who sported a Lheidli T'enneh First Nation pin on his lapel, said he is also working to get the band's support. In a statement from West Coast Olefins, Lheidli T'enneh Chief Clay Poutney said the band "looks forward to potentially partnering with West Coast Olefins to ensure that if the project is approved (it) will provide significant economic benefits to Lheidli T'enneh and our members, and is designed and built in a way that is aligned with our values."

Mayor Lyn Hall welcomed the news, calling it a "game changer" that will be good for the region as well as the city.

West Coast Olefins was formed a year ago to pursue the project. According to the company website, James and Chief Operating Officer Ron Just both have 30 years experience in the industry and hold degrees in chemical engineering from the University of Waterloo, as does Chief Financial Officer Shafiq Karmali.