The lives of the goldrush still whisper to modern times, for those who put their ears to the ground of history.
Mar 24, 2017 11:02 AM By: Frank Peebles 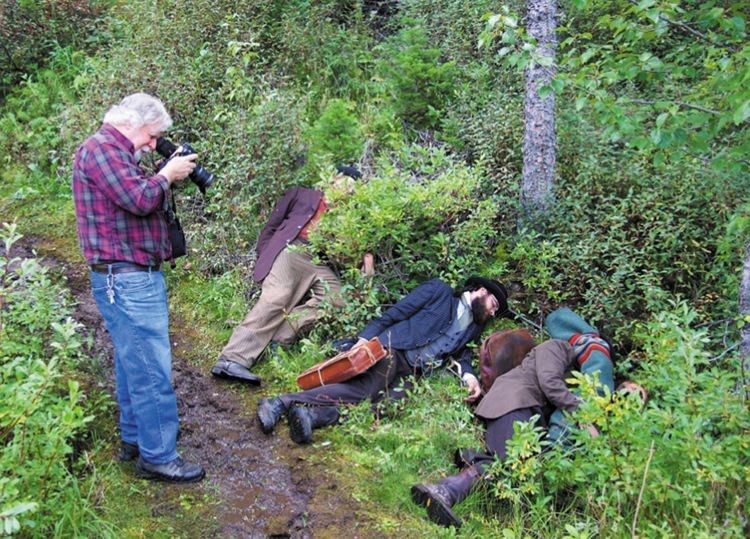 Richard Wright, author and filmmaker, gets footage of actors Stu Cawood, Rohan Keenan and Brendan Bailey for one of the Bonepicker films. These mini-documentaries shed new light on the Cariboo gold rush.Handout photo

The lives of the goldrush still whisper to modern times, for those who put their ears to the ground of history.

Richard Wright and Amy Newman aren't just craning their ears, they are digging into the earth of the Cariboo's past and they have a new video series to echo what they sluiced out of the diaries, black-and-white photo albums, church records, newspaper clippings and other period data.

The title itself comes right out of the rich soils of Barkerville, by way of far off and long ago China.

The large Chinese population of the 18th century town maintained a deep tradition of returning the remains of their dead back to their homelands so their spirits could rest in peace. The people who collected the remains and dispatched them back to China held a special place in the lives and hearts of the Chinese merchants and miners. They were known as bonepickers.

"I saw us as doing something similar, in a symbolic, historical sense," said Wright.

He and Newman have just posted their latest mini-documentary rooted out of their era of interest.

The short-film is called Leap Of Faith: The Story of John Jones - Overlander. They have a handful of prior mini-docs, most of them averaging about six minutes. This latest one is almost half an hour.

The camera floats over artists' renderings, maps, old photos and cuts frequently to the two filmmakers as they drive on modern roads and asked questions of residents they encounter about the trail over the mountains taken by the first party of explorers from the eastern side of the United States and Canada probing for a pass between the plains of modern-day Alberta hoping to reach the Cariboo goldfields.

That bold but somewhat bewildered band of travellers had a diarist among them, John Jones, who left behind a detailed description of their wilderness trek into almost complete unknown.

"It's amazing to me," said Wright.

"If somebody was to walk or cycle or ride horseback across Canada now, that's a big deal. But when there were no roads, no bridges, only three supply posts - the closest being Fort Edmonton - think about how tremendous these journeys were. And a guy like John Jones really had no idea where they were going.

"They got through by luck, and even that isn't a very good word. Luck was hardly on their side a lot of the time."

No one in Jones's party made it to Barkerville to moil for gold, but they did get plenty of word back to the feverish prospectors and adventurous entrepreneurs they left behind. They were the first over the threshold of the Rockies who endeavoured to explain their routes and tribulations.

"The Jones expedition got the door open," Wright explained. "It was this group that was the first of the Overlanders, even though history puts that title on the larger bunch that came in 1862. Jones and that group made their trip in 1858 and didn't have any idea what they would encounter, they only had a vague idea about where they were going at all.

"The Overlanders of 1862 had the trail blazed for them. The railway surveyors had these experiences to work with. Rogers Pass is named after the CP Rail surveyor Albert Rogers who mapped it out in 1881, but that wasn't really fair. Rogers was just the first one with credentials to come through. Jones and the Overlanders had already done it, and they only did it because of the First Nations knowledge they picked up when they got there."

Wright wrote the book - actually about 20 of them, plus a number of plays - on this glint of time. He is also a veteran filmmaker, but let the written word and still-photo dominate his creative efforts in the past number of years.

Now he is returning to the moving picture to convey the history of the Cariboo so passionate and constant in his mind.

"In regards to Barkerville we tend to tell the stories about while these people of interest were there, but they all came from somewhere else, they had a path to Barkerville, and a lot of them lived an interesting life after they left Barkerville so it's really interesting stuff," he said.

He and Newman have already gotten a great deal of interest from the United States, due to the high population of Americans who came and went from the Cariboo goldfields. There are Barkerville alumni connections to infamous cavalry general George Custer, the equally wild western town of Tombstone, the Battle of New Orleans, and other pages of the continent's colonial history.

As a result, these documentaries are catalyzing calls to be guest speakers at conferences in the United States to share storytelling and researching techniques.

Where the two creative historians really want to travel is the United Kingdom. They have already traced the roots of many Barkerville stories around Canada and the United States, but the Cariboo was a bonanza of multiculturalism and some thick branches reach from England and Scotland, not the least of which was the birthplace of Billy Barker himself for whom the place is now named.

Also in the sights of Wright and Newman are James Anderson, the poet of Barkerville, who spent his last years in Scotland, and Florence Wilson, who was both the town's library and saloon proprietor.

"There is no limit to the number of stories we could turn into a documentary," Wright said. "They are getting longer and longer as we go because they are getting more and more interesting. A lot of the people who came to Barkerville back then were refugees escaping desperate political situations, or people escaping poverty back in their home countries. The closer we look into the magnetism of Barkerville during the gold rush, when there were certainly more non-Canadians in the Cariboo than aboriginal people or Canadians combined, then it can help us understand what's happening today. People came here as a result of troubled times. It was a cultural cauldron. And we are living that out again now. It's interesting. We can apply our history to our modern conditions quite ably."

The documentaries are made possible by the financial support and resources of the Friends Of Barkerville-Cariboo Goldfields Historical Society and the administrators of the Barkerville Historic Town, as well as other production sponsors.

To see these films, log onto www.bonepicker.ca or look up the Gold Rush Backstories page on Facebook. Some, including the newest documentary on the Jones expedition, are also available to watch on the Vimeo independent film platform.