For the third year in a row, American Crown Circus (Circus Osorio) is back in Prince George. This spot on the map is a northern destination the organizers of the big-top show have circled in purple - their theme colour.
Jul 12, 2019 11:10 PM By: Frank Peebles 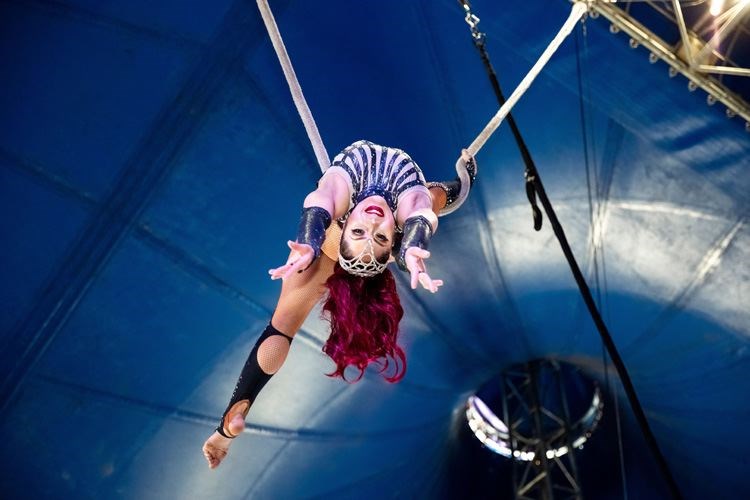 For the third year in a row, American Crown Circus (Circus Osorio) is back in Prince George.

This spot on the map is a northern destination the organizers of the big-top show have circled in purple - their theme colour.

"People in this area love the circus, they have helped us grow together as we came into Canada and got embraced by this community," said Francisco Osorio, one of the members of the proprietor family. The Osorio family has been presenting electrifying circus entertainment for four generations, dating back to their Mexico origins then growth into the United States and now their regular summer tour in Canada.

Their first visit to this city will be forever stamped on their business history and their personal hearts, said Osorio. That was was 2017, the year wildfires in the Cariboo-Chilcotin displaced tens of thousands of regional residents into Prince George. The American Crown Circus opened their tent up for free seats for the wildfire refugees and raised about $4,000 for their financial needs.

This year they are partnering with the BC Children's Hospital Foundation, benefiting sick and injured children no matter where the tour goes in the province.

"Circus is all about family. We are a family of performers on the road and we are also family with our audience," said Osorio. "It doesn't matter what language you speak, everyone understands circus. And circus breaks barriers. It has always been that way: cultures, nationalities, whatever kinds of people, new ideas."

Their cast this year includes performers from Mexico, Belarus, Russia, Argentina, Romania and the U.S.

"We always bring a brand new show. It is not the same as last year," said Osorio. "We are the international circus under the big-top, and that makes us unique again. Circuses aren't under the big-top tent like they all used to be. We keep that tradition, and people in Prince George expressed to us that they really like that feature."

Osorio said the big ticket under the big-top this year is an out-of-this-world laser experience that combines the lights and high energy music of Eduardo the Lazerman, an act from Paris, France that the American Crown Circus brought into their performers' tent for this tour.

Also coming this year is the catapulting strength and artistry of the Dragmir Troupe, the Belarus Triple Eagles defying the laws of gravity from high above the arena floor, plus zany circus clowns and much more.

General admission is $25 (includes one adult plus two kids aged 10 and under). Additional child tickets are $10 each. Tickets available at the door.