20 good things that happened in Prince George in 2020

Despite all of the negatives the COVID-19 pandemic brought to the world and Prince George in 2020, there were still local highlights to celebrate and we shouldn’t lose sight of them.
Jan 2, 2021 12:21 AM By: Christine Hinzmann 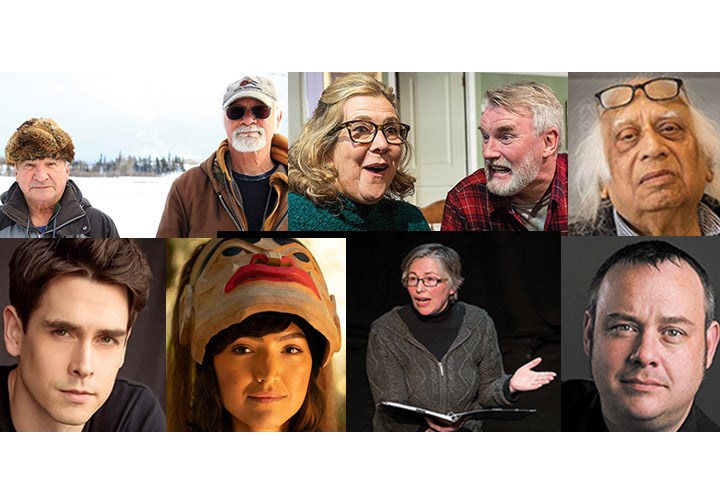 Some of the people behind 20 good things in Prince George in 2020 were, top row, left to right - Paul Cailleaux and Brock Bailey, Frances Flanagan and Wally MacKinnon, and Brij Berry - and bottom row, left to right - Madison Smith, Grace Dove, Julia Mackey and William Kuklis.

Despite all of the negatives the COVID-19 pandemic brought to the world and Prince George in 2020, there were still local highlights to celebrate and we shouldn’t lose sight of them.

So here are 20 good things, in no particular order, that happened in Prince George to brighten the year:

* In the early days of January, the Woodpecker Church doors were opened for a winter service for the first time in 30 years. The bells rang to call 21 members of its congregation into the unheated, unlit tiny church to hear Vicar Alexis Saunders give a message of love, peace and hope.

* As has been the case for a few years now, volunteers with Ducks Unlimited Canada feed the ducks that winter in Prince George. Every day for months, Paul Cailleaux and Brock Bailey coordinate the feeding at Cottonwood Island Park and the community continues to help by donating duck food from Spruce Capital.

* The Bird and the Bees, a play presented by Miracle Theatre with proceeds going to charity, was a huge hit in February just before the pandemic hit. This year marked a milestone that saw more than $100,000 donated to charity over the years by Miracle Theatre, which brings professional actors together on stage for a light-hearted comedy. Hallmark movie favourite Frances Flanagan took one of the lead roles in the play and her stellar performance helped with the play's outstanding success.

* Prince George resident Bailey Grose created Hearts of PG to help keep her children engaged during self-isolation where social distancing was being adhered to during the first wave of COVID-19. The movement that sees people make paper hearts and post them in their homes' windows as a symbol of togetherness and hope has encompassed the world in a very short time.

* In April, Marty Anderson, a Prince George resident, had his short story called My Wife Tried to Kill Me published in Laughter is the Best Medicine, the first humour-based book in the Chicken Soup for the Soul series. The story Anderson shared talked about how he underestimated the power of the plank exercise.

* Mr. Berry, a documentary about a longtime Prince George math tutor who has touched the hearts of his community, won Best of Fest in the Yorkton Film Festival. Writer/director Daniel Stark and producer Jason Hamborg of 6ix Sigma Productions created the documentary. The film was in the category of Documentary History & Biography, in which it was also recognized with top honours. See the video here https://www.6ixsigma.ca/mrberry

* Madison Smith, a successful actor who grew up in Prince George, won a Leo Award for supporting actor in a television movie. The Leo Awards are presented by the British Columbia television and film industry and Smith was honoured for his role in the Hallmark movie Write Before Christmas.

* Kiani Wilkinson, a local 23-year-old hockey player, turned pro this year when she signed the contract in August to play with the Kunlun Red Star professional women's hockey team in Shenzhen, Guangdon, China. Wilkinson started her hockey career when she was 13 years old.

* Faith (nee Wil) Fundal, a journalist for CBC Daybreak North, created and hosted a new podcast series called They & Us that talks about gender identity. The informative podcast series garnered national attention. On the negative side, Fundal moved to Winnipeg at the end of the year to take on a new role with CBC Manitoba as the host of its afternoon radio show.

* The Prince George Symphony Orchestra started a successful fall season, adhering to all the protocols and restrictions during that time that allowed up to 50 people to gather at an indoor event while social distancing. Having live entertainment was a very welcome distraction for many people during the pandemic.

* Local staff members at School District 57 were able to create an online resource about students with concussions to guide the student, parents, coaches and teachers on how to support the injured person.

* Wheely Funny Garden Parties saw local comedians and their teams visit people in their backyards to bring them live shows to provide some safe entertainment during the pandemic. Their summer-long effort raised $8,640 for the BC Cancer Foundation and cancer research. The comedians who stood up for a cause were Mike McGuire and Cody Malbeuf, who invited their comedian friends along to round out the show.

* Grace Dove, who grew up in Prince George, starred in the feature film Monkey Beach, which played at the local Cineplex Theatre this October. The movie was filmed in Kitimat. Dove, who is a member of the Tsq’escenemc First Nation in Canim Lake, near 100 Mile House, attended Kelly Road Secondary School where she was in the drama department and moved to Vancouver and then Los Angeles to pursue her dream of acting. Monkey Beach is the long-awaited film adaptation of Eden Robinson's award-winning novel directed by Loretta S. Todd. Monkey Beach was written, directed and starred Indigenous peoples.

* Stage readings offered an alternative to full-set stage productions at Theatre NorthWest, giving community playwrights and actors a way to be heard by small, socially distanced audiences during the pandemic.

* William Kuklis, a local actor and singer/songwriter, is the voice of classic villain Dennis Nedry in LEGO Jurassic World: The Legend of Isla Nublar, an animated series currently available on Netflix. The character was first seen in the original Jurassic Park movie played by Wayne Knight.

*  The Celebration of Lights at the Central BC Railway and Forestry Museum went ahead as a drive-thru event. The museum's biggest annual fundraiser was adapted to a COVID-friendly event to accommodate as many people as possible as safely as possible.

* Carrier Sekani Family Services Sk'ai Zeh Yah Youth Centre, Children of Chiefs House, opened recently in downtown Prince George to serve everyone eight to 29 years old. There is always a need for donations for socks, boots and coats that can be dropped off at the centre located at 1575 Second Ave.

* The Salmon Valley Community Association and Volunteer Fire Department replaced its annual Santa's Breakfast with visits to neighbourhood children at the end of their driveways as teams delivered goodie bags to all the boys and girls in a COVID-friendly way.

* Two wonderful people retired from their significant roles in the community. Artist Ken Ferris has retired from his longtime role as the manager of volunteer and corporate fundraising for Ducks Unlimited in Northern B.C. Kathy Nadalin retired from her regular Seniors Scene column in The Citizen after more than eight years of weekly profiles of amazing local seniors.

Whatever 2021 brings, let’s all take the time to celebrate the good things and the great people that make them possible.