The Prince George Cougars’ Mega Society 50/50 Jackpot is not only exciting for the winners. The other half of the proceeds are donated to community groups who are making Prince George a strong and vibrant city 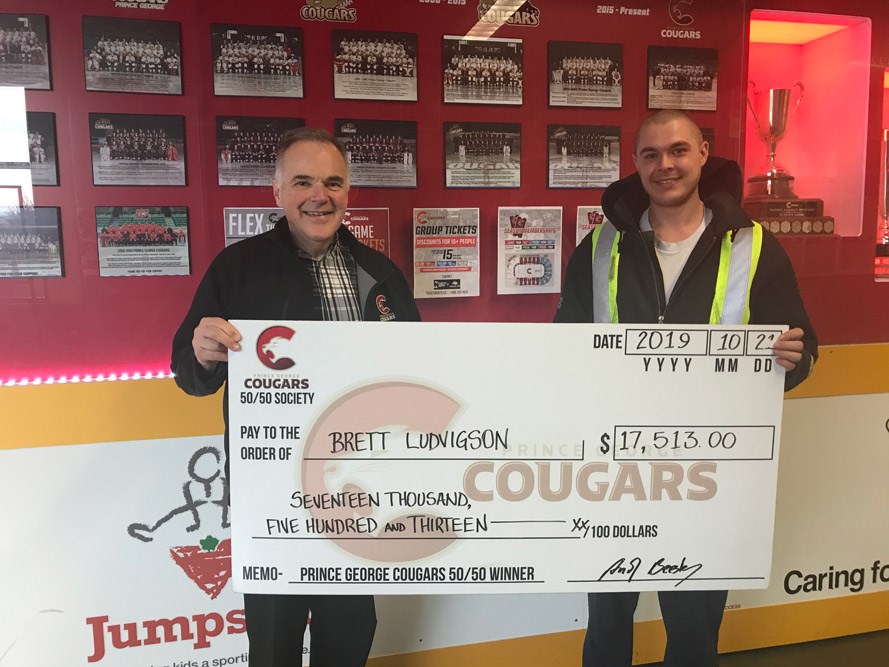 First comes the shock. Then comes the giddy excitement. And, in the weeks following a lucky ticket holder’s win of the Prince George Cougars’ Mega 50/50 Jackpot, there’s another realization — life has just become a whole lot better.

“Many of our winners are profoundly moved by winning and say it will make a big difference in their lives,” says Andy Beesley, Vice-President, Business for EDGEPRo Sports and Entertainment, the owners of the WHL major junior ice hockey team.

“With our last Mega Jackpot, the winners said that winning this money, apart from being awesome, helped to change their life for the better. It accelerated their ability to put a down payment on the house and pay some bills, all thanks to coming to a Prince George Cougars hockey game. It’s exciting for them.”

It’s not only the winners who are excited about the Mega 50/50 Jackpots, which take place once or twice a year at Cougars games. While half the proceeds go to the winning ticket holder, nearly every penny of the other half goes to a Prince George charity or non-profit organization.

“Mega Jackpots are a genuine win/win/win all around,” says Beesley. “Hockey fans come for the game and have a chance of leaving with tens of thousands of dollars. Even if they don’t win, they know they are contributing to groups that matter deeply in the community, such as the Canadian Cancer Society, Big Brothers/Big Sisters, Salvation Army, Prince George Community Foundation and local Rotary Clubs.”

“There’s a tangible tie-in to giving back to the community,” agrees Iain Scott, Director of Business and Game Operations for the Cougars. “When people buy a ticket they’re able to see that the money they’re spending on 50/50 is improving the lives of so many people in the city.”

The proceeds — including those from the regular 50/50 draws, which typically have a cash prize of $3,000 to $6,000 at every home game — are divvied up between all the groups who make it possible. As well as the local organizations, which provide volunteer game ushers, the local figure skating club volunteers to shovel away the ice shavings.

Parents of the Cariboo Cougar major midget hockey team volunteer to staff the kiosks for the 50/50 draws. “It’s a huge commitment and they do a remarkable job,” Beesley says.

That all makes for three big winners: the lucky ticket holder, local recipients and everyone who shares the Cougars’ pride in calling Prince George home.

To learn more about the Prince George Cougars and purchase tickets for their games, head to their website.

Remote training helps develop both careers and communities
Jun 23, 2021 9:26 AM