Prince George's development incentives sweet but not a deal-maker 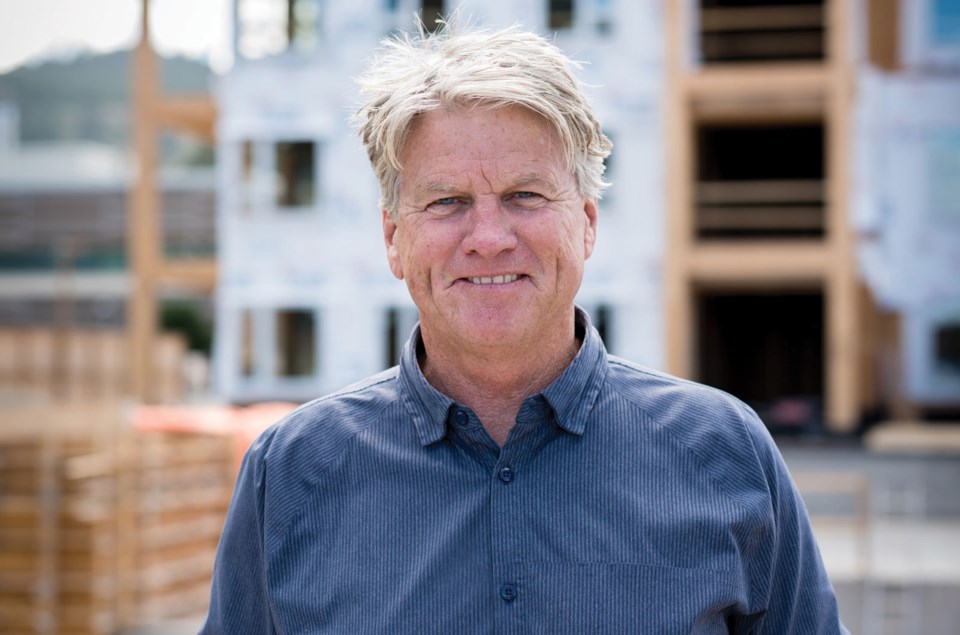 Developer Frank Quinn says incentives provided by the City of Prince George were appreciated but the city’s potential would likely have been enough to convince him to build the first modern strata housing complex in the downtown core.

Kamloops-based A&T Project Developments, of which Quinn is a partner, is constructing the phased Park House development, a condominium project of four four-storey buildings across from city hall. The first phase of 36 units saw 16 pre-sales while still in the framing stage. The condos are selling for about $350 per square foot.

“We like Prince George,” Quinn said, noting that A&T built the 160-unit RiverBend seniors’ housing rental project in the city three years ago.

Under a developer incentive program that Prince George started in 2011, A&T was allowed a 10-year break on municipal property taxes for Park House, and the city sold the land for the project at appraised value.

The site is ideal, Quinn said. It will be among the anchors for a substantial downtown redevelopment that includes the existing city hall and Prince George convention centre, firehall, wood innovation centre and a new swimming pool, sports centre and green space.

It is part of a “common realm” plan meant to transform the downtown into a walkable, inviting space for residents and shoppers.

Approached by the city, which was interested in creating more housing in the core, A&T soon hired the architects behind Wesbrook Village at the University of British Columbia to ensure the project would be built to the latest standards.

“Most of the condo projects in Prince George are older. Park House will be the first contemporary new homes in the downtown,” Quinn said.

The complex will offer underground parking, the first in downtown Prince George, and will include electric-vehicle charging stations, as well as such perks as a yoga studio and fitness room. Quinn expects the condos to sell well, noting that pre-sales have gone better than expected.

“Prince George is not traditionally a pre-sale market,” he said. “Buyers are more likely to buy a finished product.”

No commercial space was included in Park House he said, because the downtown site is ringed with shops and services.

Planning for Park House began before the final investment decision for LNG Canada’s $40 billion liquefied natural gas terminal was even made, but that project, along with the approved $4.5 billion Trans Mountain oil pipeline, is likely among the reasons why Prince George is attracting more real estate investments.

In the first quarter of this year, for instance, 257 homes sold in the city, worth $90 million, up from $82.2 million in sales volume at the same time last year. The median detached-house price is up about 10 per cent from 2018, at $327,500, according to the BC Northern Real Estate Board.

As of the end of December 2018, total building permits in Prince George reached $186 million, up from $116 million a year earlier. In the first quarter of 2019, building permit values topped $26 million.

Melissa Barcellos, Prince George manager of economic development, said that the city will benefit directly from oil and gas pipeline development. The Trans Mountain oil pipeline from Alberta to the Lower Mainland, which was expected to receive federal government approval in June, runs quite close to the city, she noted.

“As the biggest city in the north, Prince George will naturally attract a lot of the business associated with LNG Canada as well,” Barcellos said.

Among the major investments is the new, 174-room Courtyard Marriott Hotel, which opened a year ago in the downtown.

Under construction is a 95-room downtown hotel by Mundi Hotel Enterprises Inc. and modular builder Horizon North Logistics Inc. It will replace the old Days Inn that will be demolished to make way for the new pool.

In May, HDR  | CEI Architecture Associates Inc. and Chandos Construction representatives were in Prince George to consult with the city and residents on the new $42 million public swimming pool that will replace the aging Four Seasons pool downtown. Design work will occupy the rest of this year with construction to start in 2020.

A new student housing project is also underway downtown, and the city is working to establish a fast-bus network to link the city’s core with the University of Northern British Columbia and the College of New Caledonia campuses.

Prince George offers a relatively generous incentive program for downtown developers for both residential and commercial projects. These can include five-to 10-year property tax breaks, waiving of parking requirements and flexible zoning. Development-cost charges are among the lowest in the province, at $299 per unit for multi-family projects and around $28 per square foot for commercial projects.

Contributions of $10,000 per unit are available for residential and mixed-use projects in the downtown, payable to the property owner after an occupancy permit has been issued, according to a city release