The number of homes for sale across the province are at or near a 12-year low, pushing prices ever upwards, according to the B.C. Real Estate Association’s monthly statistical report released April 12.
Joannah Connolly Apr 12, 2018 11:17 AM

The number of homes for sale across the province are at or near a 12-year low, pushing prices ever upwards, according to the B.C. Real Estate Association’s monthly statistical report released April 12.

Sales of homes on the Multiple Listing Service® (MLS®) across the province in March were down 24.6 per cent from the same month last year. The BCREA said this was caused in large part by government measures to cool the housing market such as the strict new mortgage qualification rules launched in January, which typically removes about 20 per cent of home buyers’ purchasing power.

“More burdensome mortgage qualifications are having the predictable effect of swiftly curbing housing demand,” said Cameron Muir, BCREA chief economist. “You simply cannot pull as much as 20 per cent of the purchasing power away from conventional mortgage borrowers and not create a downturn in consumer demand.”

Despite this “downturn in demand” and subsequent slowing of sales, the continued dearth of homes available to purchase has kept the province as a whole in seller’s market territory, with a sales-to-active-listings ratio of near 40 per cent. (Analysts say that a balanced market is when the ratio has remained between 12 and 20 per cent for several months.)

A market where sellers have the advantage puts continued upward pressure on prices, resulting in the average B.C. home sale value in March rising 5.3 per cent year over year to $726,930. 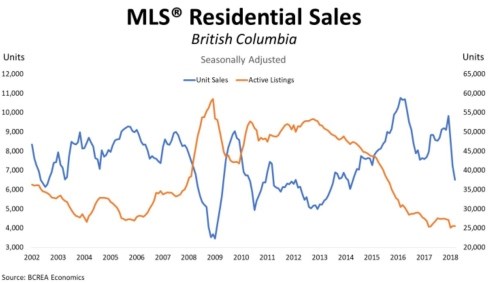 The region with the strongest seller’s market was Victoria, with a sales-to-active-listings ratio across all property types at a whopping 83.4 per cent. Only the Kootenay, Norther Lights and B.C. Northern regions were deemed to be in a balanced market.

The BCREA report concluded, “Home prices are expected to continue an upward trajectory.”

What you should know about Bob Lewis, the prolific builder of West Coast Modern homes
Dec 8, 2022 11:39 AM