Still dancing after all these years 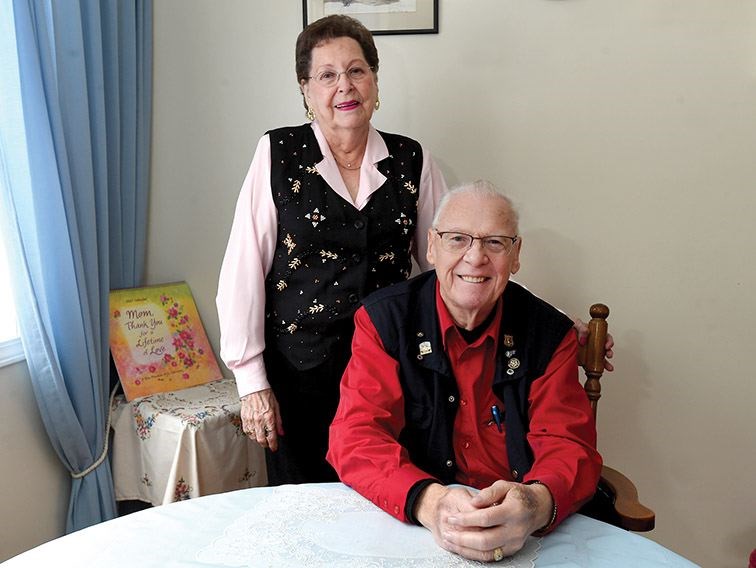 Phyllis and Larry Anderson, Prince George residents since 1958, have pursued many interesting pastimes during their lives here, including Phyllis teaching cooking and crochet, while Larry took up operating a ham radio.Citizen photo by Brent Braaten

Larry and Phyllis Anderson have been in Prince George since 1958. Larry, one of six children was born in Winnipeg, Man. in 1938 and spent his early years on a farm. His father sold the farm and moved the family to Vancouver in 1953 to work in the construction industry.

He went to John Oliver High School and noted that at the time this was one of the roughest and toughest schools in the Lower Mainland. He easily made friends with all the biggest kids in his school and the rowdies quickly learned to leave them alone.

Jobs were scarce in Vancouver so his parents moved the family to Prince George in 1956 and Alex Moldowan hired his father to drive a lumber truck.

Larry finished his schooling at Prince George Senior Secondary and then went to work for BC Equipment as a Kardex clerk in the inventory control department, moved up to the parts department and then became the parts manager.

Larry said, "Over the next 35 years the company was sold to International Harvester, then Canadian Aviation Electronics and finally Vulcan Machinery. My chair never moved, my job stayed the same and the only thing that was different was the color of my paycheck. When the company closed, I worked in the parts department at NR Motors for the next 10 years. I took early retirement and disability in 2001."

Larry met Phyllis Favelle in 1958. Phyllis, who is of Metis heritage and one of eight children, was born in Gypsumville, Man., in 1937. Her father was wounded in the First World War and raised his family by working at the local gypsum mine.

Phyllis left home when she was 14 years old and went to work. She eventually worked as a nurse's aide in the Tuberculosis Sanitoriums in both Ninette and The Pas, Man. She particularly enjoyed the work in the area of the nursery.

Phyllis said "in 1958 I traveled to Prince George to visit my sister. I met Larry when he was doing the books for my brother-in-law. I worked as a waitress at the Mason's Café and then Garland's Café in Giscome for two years. Larry and I dated, got married in 1962 and the rest is history."

Larry and Phyllis have three sons: Allen, James (Lydia) and Marty (Carla) who in turn gave them six grandchildren.

Over the years, Phyllis volunteered for everything to do with her children, took in new born foster children and still found time to babysit the neighbor's children. She taught cooking and crochet classes at the school and chaperoned the road trips with the school band.

She volunteered for 20 years for the Festival of Trees and said she enjoyed the experience immensely.

To help support their family she operated a family only catering service out of her home, did domestic work for family and friends and worked in a gift store. She learned to make beaded earrings and to sew her own square dance outfits.

Ladies softball was her game. She proudly said, "My coach said I was really good at the game and I was proud of that. Over the next 40 years, if I wasn't playing ball, I was enjoying five-pin bowling."

Larry said, "When I was still in high school, I worked weekends in a doughnut bakery deep frying and then icing the donuts. Now Phyllis makes the doughnuts and I still fry and ice them. Making and serving fresh donuts is a ritual at Christmas, birthdays and other big family gatherings."

Larry's hobbies were hunting, fishing, snowmobiling, camping and his evenings out square dancing with Phyllis for 22 years. He is now a licensed ham radio operator and is involved with emergency communications and disaster preparedness along with other members of the Prince George Amateur Radio Club. Larry said, "For me amateur radio (ham radio) is a great hobby. As a club, almost everything that we do is either done solely for public safety or has a large public safety component to it."

His volunteer work included serving as the block watch captain, Boy Scout leader and being active with the Prince George post-polio awareness and support group.

He has a 10-year award for his community work as a volunteer member of the RCMP Auxiliary.

He has traveled all over Canada and the States on work related trips and has many interesting stories about events from each trip especially his trip to the boardwalk in Atlantic City, New Jersey.

He traveled all around the Prince George area with his sister June Chamberland as she did the research needed to write her book called From Broad Axe to Clay Chinking.

Larry's medical history is complicated. He explained, "I came down with polio in 1953 and spent three months in the hospital and another 10 months learning to walk again. I came down with rheumatic fever and acute nephrites. The doctors had me flown to Vancouver with a one in a thousand chance of surviving.

"When we were going to be married, the doctors called Phyllis in and advised her that I may not live past 26 years of age but she married me anyway. That was lucky for me because she has kept me alive all these years.

"In 1981 I came down with blepharo spasm and in 2001 I was diagnosed with post-polio syndrome. The specialist told me I could probably work for another year and end up in a wheelchair and not be able to do much of anything or to quit working now and see how long I could keep going. I guess I made the right choice because I am still getting around even though it is starting to take its toll on me.

"In 2008 I had neck surgery because my spinal cord was being pinched off by my spine and I was quickly becoming paralyzed from the neck down. To make a long story short the surgeons successfully bolted my spine together with titanium rods after cutting a piece of horseshoe shaped bone out of my spine.

"In 2013 I had a heart attack and as well I have a leaky heart valve from the effects of rheumatic fever. I had a pacemaker installed a few months ago.

"Every time one illness was treated, it aggravated the other. I survived each time with the outlook that I would have maybe 10 more years to live. Well, I am still here today and I give thanks to Phyllis for that. I went through a lot of pain over the years and she has been my life saver and my pillar. She kept me alive and gave me the reason to carry on. The doctors tried to tell her before we got married that I wasn't a good bet but that did not stop her and she married me anyways. We have been married for 57 years and I know it has not always been easy for her. I am so thankful for my wife and the rest of my great family."