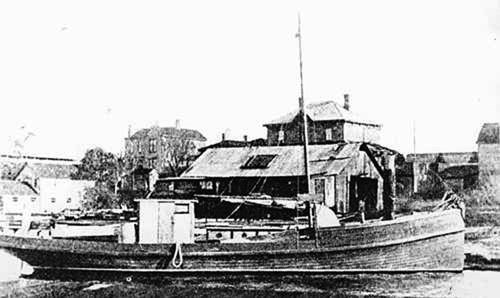 (ITALIC) Although only a brief news item, and not strictly local, this story marked the culmination of a famous case of piracy on B.C.'s coast.

The murder of Capt. William Gillis and his 17-year-old son, William Jr., aboard the Beryl G in the Haro Straight on Sept. 15, 1924 prompted an international investigation and sensational trial. The details of the case - involving rum runners, piracy, murder, corrupt cops and a trail of clues worthy of a Sherlock Holmes mystery - would have been familiar to Citizen readers in 1926 from previous Citizen stories on the trial.

The tale of the Beryl G has been written about in magazine articles and books, and is the subject of a folk song by the Vancouver Island band Tiller's Folly.

Here is what happened: (END ITALIC)

The April 2, 1925 edition of The Citizen reported on Baker and Sowash being committed to stand trial for the murder of Gillis and his son, both of Vancouver, who had been engaged in rum running between Vancouver and the U.S.

"The bare facts in the Beryl G hijacking and murder equal the best thrillers of the fiction writers," The Citizen reported. "The gasoline (powered) boat Beryl G was found adrift in the vicinity of Sidney late in September last, after the owner W.G. Gillis, and his son William, had been missing for a number of days."

At the preliminary hearing the Crown argued that Baker, who had just been released from a Washington state prison, decided to hijack a load of liquor from one of the rum runners operating between B.C. and the United States.

"He (Baker) had been in the business and knew most of those who were so engaged," The Citizen reported. "He enlisted the co-operation of Harry F. Sowash, on trial with him, and of Charles Morris, who is still fighting extradition. He have them to understand that he had an arrangement with the British Columbia authorities to search out caches of rum-runners, and that he was to split fifty-fifty on the proceeds of any liquor which might be discovered."

Baker had an accomplice on the Seattle police force visit Victoria to discuss probable locations of liquor caches among the gulf islands. This corrupt officer allegedly brought Baker back information about possible cache locations.

"Baker purchased a brass-braided shipping cap and some brass buttons in Seattle for an official make-up, and then engaged a boat and began a search for liquor in the places indicated by his confederate. Needless to say, none was found," The Citizen reported. "Baker then brought Paul (Stromkins) into his combination, who has frequenting the B.C. waters and was the owner of a gas-boat. The hijacking of the Beryl G was accomplished through the use of Stromkins' power-boat. It stated out from Victoria on the night of Sept. 15th with Stromkins, Baker, Sowash, Morris and two others on board. The plan outlined by Baker called for the hijacking of the Beryl G and the turning of the captain and his son adrift, so that they would have time to dispose of the cargo."

The band of pirates spotted the Beryl G on her return from a trip to the West Coast, where Gillis and his son had smuggled some liquor. However, the boat still had 240 cases of liquor in the hold of their boat.

The gang of pirates found the Beryl G at anchor, so Baker, Morris and Sowash quietly approached it in a rowboat.

"As they came alongside of the Beryl G, Baker scrambled on the deck and was followed by Morris. Just what happened after this statement is a matter of surmise, as Baker refuses to talk and Morris is still in the state of Washington," The Citizen reported.

Sowash told police that he heard Capt. Gillis ask who was there, and Baker replied "It is the law. Come out,"followed by a couple of shots. Baker then came to the side of the boat and told him to come aboard and start the engines, Sowash told police.

Sowash said he never saw Gillis or his son, but Baker told him he'd shot the captain in the arm.

Stromkins also gave evidence to police, and kept to his story in the preliminary hearings.

Stromkins said Baker admitted to him that he'd killed Capt. Gillis and that Sowash murdered William Jr. as he was coming up the companionway of the boat.

"He (Stromkins) also told of fastening the bodies to the anchor of the Beryl G and putting them over the side of the boat while it was in motion," The Citizen reported. "Although (a) systematic search was made by the police for the bodies, no trace of them was secured."

Stromkins said Baker told him they sliced open the bodies so they would be less buoyant.

Prison officials also provided evidence that Sowash had turned his prison blanket into a rope and had lowered notes to Baker, who was in a lower cell, about his confession and how they should collaborate to make it appear Stromkins was the instigator.

Some of the details of Stromkins' testimony fit the evidence found by police when the Beryl G was spotted adrift by the lighthouse keeper of Turn Point Light in Washington state on Sept. 16, 1924.

According to an article in Canada's History magazine, the American Coast Guard towed the Beryl G to San Juan Island and called the Canadian authorities. The Beryl G was a Canadian ship, and they believed she had drifted from Canadian waters.

Insp. Forbes Cruickshank -a bluff, veteran Scottish-Canadian detective with the B.C. Provincial Police -was dispatched to investigate the case.

Cruickshank examined the Beryl G - there was large amounts of blood in the cabin, including marks suggesting bodies had been dragged - a missing anchor; bullet holes; empty bullet casings; a fancy, bloodstained seaman's cap; and a camera with a single frame of film exposed. That photo, taken from the deck of Beryl G, showed the stern of a boat bearing American registration number M 493.

Cruickshank tracked the registration number to a boat owned by Peter (Legitimate Pete) Marinoff, a big-time Tacoma rumrunner who was sick of liquor pirates interfering with his business and willing to talk.

Marinoff told Cruickshank that Gillis had met one of his men in a cove on the east side of Sidney Island on Sept. 15 and transferred 110 cases of booze to the M 493. When Marinoff's man returned the next day to pick up a second load, Gillis and the Beryl G were gone. He also gave Cruickshank the name of Al Clausen, a service station owner who chartered out his fast speedboat with no questions asked.

Clausen remembered taking Morris, Baker and Sowash into Canada on two occasions in late September, 1924 to pick up caches of liquor in the gulf islands. Baker had boasted to Clausen about stealing the liquor from Gillis.

With some names, Cruickshank was able to piece together evidence. A witness on Pender Island who'd sold the men sacks and paint to repackage the liquor mentioned Stromkins, so B.C. police pulled Stromkins in for questioning and he confessed his role in the case.

Morris was found in Seattle, Baker in New York City and Sowash in New Orleans trying to hitch a ride on a ship headed to South America.

Stromkins was released in exchange for his evidence. Morris lost his extradition case, and was eventually sent to Canada, tried and sentenced to hang. However, his sentence was later commuted to life in prison.

Cruickshank attended the hanging on Jan. 14, 1926, according to Canada's History. Baker saw the inspector in the audience, and greeted him.

According to Canada's History, Baker's last words on Jan. 14, 1926 were to hangman Arthur Ellis.

(ITALIC) None of the incidents previously featured in Raiding the Archives has inspired a song before. Check out Tiller's Folly's catchy tune, The Bitter End, about the Beryl G case online here: www.tillersfolly.com/21_the_bitter_end1/. (END ITALIC)