With each passing year, more and more people, in B.C. and around the world are anxious about what future summers have in store.
Jul 15, 2021 5:11 AM By: Neil Godbout 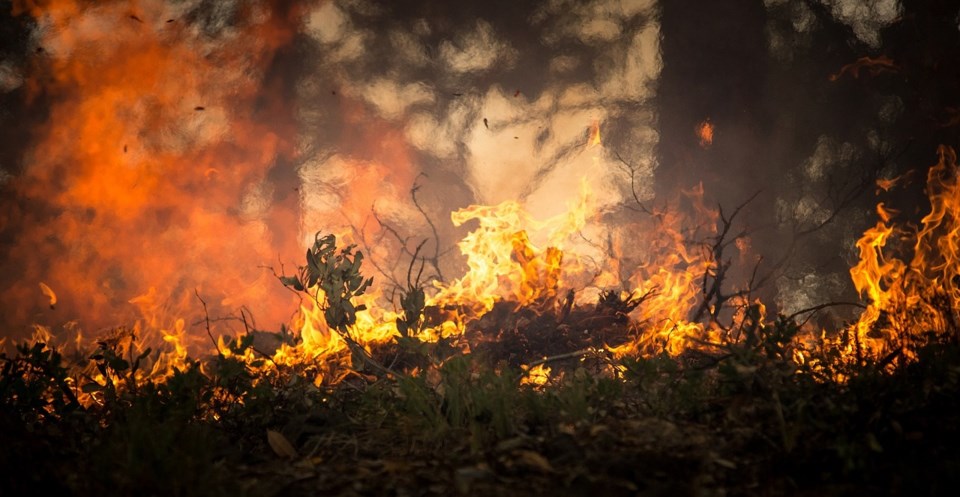 Forest fires and smoky skies are what we'll see more often each summer, unless we change our ways. (via Skeeze/Pexels)

The warning issued by Ned Stark in the first episode of the popular Game of Thrones TV series (and George R.R. Martin books) gives the viewer a sense of foreboding. Winter is cold, dark and merciless. It is the season of death.

In a spoof of Game of Thrones (wait, that was already done 40 years ago by Monty Python), Stark would have grimly stated: “Summer is coming.”

And everyone would have laughed. Yay, summer! Bring on the season of long days basking in the warm sunshine, where the land and the rivers are alive. Let it stay with us forever. Who’s scared of summer?

With each passing year, more and more people, in B.C. and around the world are anxious about what future summers have in store. Now we worry about heat waves and weeks of no rain harming crops, livestock and wildlife. Now we wonder how about the forest fire season will be and will the air quality be so bad it makes day seem like night, as we’ve already seen in recent years.

While Prince George is blessed to be drawing its water from an underground aquifer, far more communities in B.C. depend on fresh water from reservoirs, making them vulnerable to summer drought.

The recent heat wave also brought soaring electricity use, which led to power outages and brown outs in various parts of the province.

While it’s difficult for coroners to blame deaths directly on the heat, more than 500 British Columbians died during the recent wave than in the same time period in past summers. We only need to look to our cousins to the south to see the suffering and damage caused by extended, extreme heat events.

Summer is not coming.

Yet Deborah Harford, the executive director of the Adaptation to Climate Change Team in the environment faculty at Simon Fraser University in Vancouver, doesn’t want to dwell on the doom and gloom.

“People don’t respond to fear. It’s demotivating,” she said. “I like to talk about benefits and opportunities. We can outline the danger and here’s what we can do about it.”

Harford’s particular focus is on getting governments to act, not just with policy and regulation but with changing the discussion.
“There’s a misconception that individuals can solve this problem,” she said. “I hear from young people all the time who say ‘you guys created this problem.’ I feel bad enough already that this generation is facing down this global crisis.”

She sees her role as working with other experts to develop solutions when people are ready to explore them (like right now, after an unprecedented deadly heat wave fresh in people’s minds). It’s about making the connections between reducing carbon emissions and lowering the risk of extreme weather events, improving health outcomes, protecting biodiversity, helping vulnerable members of society, decreasing income inequality and safeguarding the tourism industry.

With B.C.’s tourism industry eager to welcome the world after the pandemic, a province shrouded in heat and choking smoke isn’t particularly inviting and people will make other plans, she noted.

Making those connections and creating those incentives to change leaves Harford upbeat about the future.

“I am optimistic about the human capacity to adapt but that’s also what’s responsible for a lot of the trouble we’ve got into,” she said. “We should have the courage to try things but it has to hold up for decades. We need robust solutions.”

And we need to be better than Ned Stark.

Although his prediction based on fact and experience was ultimately true, it fell on deaf ears, in much the same way the climate change warnings have been dismissed or diminished.

In Stark’s case, even when given the power to affect change, he became mired in the politics and the limits of his authority. He lost sight of the big picture and then paid the ultimate price.

There are worse summers ahead and they will become increasingly worse.

Fortunately, we have the knowledge, the expertise and the adaptability to make things better for future generations.