Glen ‘Moose’ Scott, a two-time Prince George city counselor perhaps best remembered for his efforts to promote the sport of lacrosse in the city, died of cancer Friday at age 75.
Jan 23, 2020 8:21 AM By: Kathy Nadalin 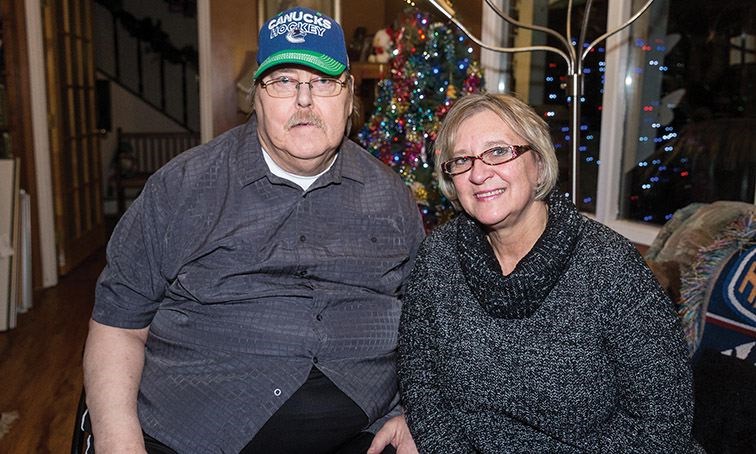 Citizen Photo by James Doyle. Glen "Moose" Scott and his wife Patricia pose for a photo at their home.James Doyle, Photographer

Glen ‘Moose’ Scott, a two-time Prince George city counselor perhaps best remembered for his efforts to promote the sport of lacrosse in the city, died of cancer Friday at age 75.

A tireless advocate for his hometown, known for his gregarious personality and willingness to get behind a good cause if he felt it was going to make the city better, the Moose was a larger-than-life character whose heart was always in the right place.

As the founding commissioner of the Prince George Senior Lacrosse Association, he revived Canada’s national summer sport and gave the best players in the city a place to showcase their talents, earning the Moose a place in the Prince George Sports Hall of Fame.

He was a devoted husband, father, grandfather and great-grandfather, a former radio personality and a member of the Citizen family for his work selling advertising for Prince George This Week, the Prince George Buy and Sell and special publications in the daily Citizen.

A few weeks ago, Glen and his wife Patricia were featured in the Citizen in a column written by Kathy Nadalin which is reposted below. Watch for more on our website later this weekend about the man we called Moose.

Glen (Moose) Scott was born in Kamloops in 1946. His mother died when he was very young and his father moved many times to follow work opportunities. His father was working in Vancouver when he remarried so Glen grew up and was schooled in Vancouver.

At the age of 18, Glen wanted to be independent so he a got part-time job in the warehouse at Woodward's on Cambie Street. When the company offered him a full-time job in the food department in their new two-year-old store in Prince George, he grabbed the opportunity and move here in 1969. He has been here ever since.

One year later, Grant MacInnis offered him a job with Nechako Beverages as a driver. He delivered their products all over Prince George until one day he was offered a job as a bouncer in a local beer parlour located at the Inn of the North. He was hired because of his strength and size and his ability to help maintain order while making sure everyone was safe and having a good time. The popular beer parlour was dubbed "The Barn" because of its western theme. The Barn could accommodate over 300 patrons and it was usually packed.

During this time, local radio station CJCI 620 AM had their broadcasting office located in the penthouse on the top floor of the Coast Inn. Glen would talk sports with all the patrons who came in for a beverage after their sports event, get the scores and phone them up to the radio station. This was the only accurate way that CJCI could get the sports scores so quickly following the games. It wasn't long and they hired Glen full time as the sports director and broadcaster.

Patricia was born in Horsefly/Williams Lake in 1958. Her father worked for her uncle Bill Kordyban at his sawmill in Horsefly. In 1961, when the mill burned down the family relocated in Prince George.

]Patricia explained, "My work experience took me to the radio station where I met Glen. We got married in 1976. Glen picked the wedding date to match Grey Cup weekend so he would always be reminded of our anniversary."

Glen's passion was working in sales so he went to work for Pitney Bowes and sold office equipment and postage meters from 1978-87. From the very start, he was always in the sales leader's group, which meant that he won a free trip for two every year for the next nine years.

In 1987, he worked for Investors Financial Group and quickly moved into financial planning.

In 1990, he went to work in the sales department for the P.G. This Week/Buy and Sell newspaper until he retired in 2013 due to health issues that he still battles today.

They have both always been willing to volunteer and give back to their community.

Over the years, Pat volunteered with anything to do with their children. She coached Pee Wees and Little League baseball and remains involved with the St. George's Ukrainian Catholic Church. She believes that you should try to give back rather than being on the receiving end of things.

One of my first questions to Glen was why the nickname Moose. Glen explained it like this: "I played lacrosse for eight years for the Labatt's Blue lacrosse team. CJCI radio announcer Don Prentice always claimed that I did not run around opposing team members but instead I ran over them like a big moose. The nickname stuck and now my friends just refer to me as Glen Moose Scott. In those eight years I tallied seven goals, 19 assists and I had 792 minutes in penalties."

Glen's love of lacrosse is shared by his family. Patricia is a scorekeeper, their son was a senior lacrosse goalie and is now the assistant senior league commissioner, three grandsons play senior lacrosse and their second oldest daughter is president of the Quesnel Lacrosse Association.

He was elected as the vice president of administration for the BCLA for eight years and served on Prince George city council for two terms.

He was a member of the Kinsmen Club, the Junior Chamber of Commerce and he was the track announcer at the PGARA Speedway Park for 18 years.

He organizes the annual Steve Elliott - Elvis Elite - Gospel Concert with the net proceeds going to the Kordyban Lodge.

Glen is known as Mr. Lacrosse but insists that he could not do the things he does without the help of many others.

In just a few days, Glen will be celebrating his birthday and I just want to say; 'Happy birthday Moose."

And a special happy birthday greeting for Robert Osbourne Anderson, from your daughter Marilyn, as you celebrate your 100th birthday next week; Happy birthday dad.