OTTAWA — Filip Gustavsson and the Ottawa Senators penalty kill added to the Winnipeg Jets' woes Monday night. Nikita Zaitsev scored with 1:13 left in the third period to earn Ottawa a 2-1 win over Winnipeg.
May 3, 2021 7:53 PM By: Canadian Press 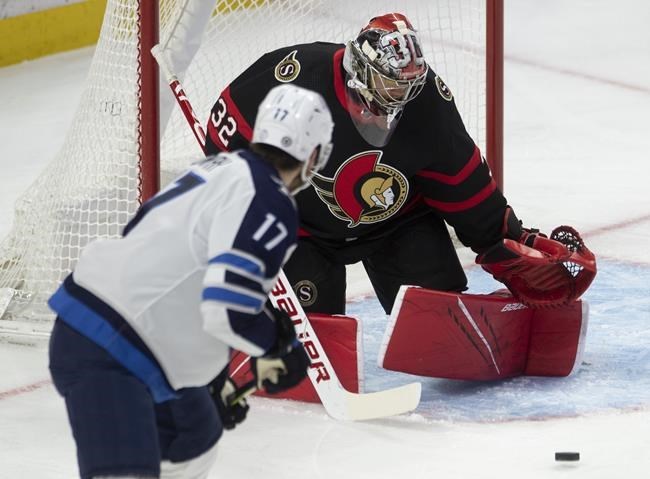 Nikita Zaitsev scored with 1:13 left in the third period to earn Ottawa a 2-1 win over Winnipeg. Gustavsson was stellar, stopping 28 shots, while the Senators held the NHL's fourth-ranked power play scoreless in six opportunities and Connor Brown opened the scoring shorthanded.

"That's the best goaltending display we've seen," said Ottawa head coach D.J. Smith. "And to be honest, we made some mistakes in front of him . . . it's good to see.

"They (penalty killers) won us the game, really. They get it shorthanded that gets us into the game . . . and when you're goalie is that good, you have a chance."

Zaitsev's third of the season earned Ottawa (20-27-5)  its sixth win in eight games (6-1-1). Brown also earned an assist on  Zaitsev's winning goal but credited Gustavsson for the win.

"I think Gus was our best penalty killer," Brown said. "I mean, he made some huge saves.

"We did our part but they had some good looks and Gus was there every single time."

"We've lost seven, we know it," Winnipeg head coach Paul Maurice said. "But we've got to make sure to give ourselves a chance not to lose eight, that we come back and find the things that are good.

"At the end of it you have a shooter at the point, you have three people wearing white jerseys between the shooter and the goalie . . . and there's no one else there so we didn't lose coverage on it. It's a shot that got through."

Maurice praised his players for how they're dealing with the tough stretch.

"We had six power plays and we don't score and they didn't let that affect their 5-on-5 game. They went back out on their 5-on-5 shift and did it right. Those are hard things mentally to do."

Ottawa lost defenceman Thomas Chabot in the first with an apparent shoulder injury. Chabot left the ice after taking a hard hit from Winnipeg's Logan Stanley, returning briefly before heading back to the dressing room.

Chabot's loss is a big one for Ottawa. He's the team's top-scoring defenceman (six goals, 25 assists) and came into the contest leading the NHL in average ice time (26 minutes, 46 seconds).

"It's upper body, we'll see in the morning how he is," Smith said. "Obviously he couldn't return and he's a tough kid.

"We don't expect that it's anything really bad but we're certainly not going to put him in harm's way either with a short runway here left. You see how important he is to our team when he's not playing. We didn't do a great job breaking out tonight but the defence battled hard."

And Chabot's absence meant others had to step up. In addition to scoring the winning goal, Zaitsev logged over 25 minutes of ice time.

"Not only 25, he spent four minutes in the (penalty) box too," Smith said. "It's 25 heavy, hard minutes against one of the better lines in the league.

"It's great to see him get rewarded a lot. I don't think enough people talk about how hard he is to play against and how little room you have and how hard it is to get to the net. He doesn't provide a ton of offence because he spends the entire game trying to shut you down. I'd say most teams don't like playing against him."

Brown opened the scoring at 11:31 with a league-tying fourth short-handed goal this season. He took a centring pass from Nick Paul on a 2-on-1 break and beat Winnipeg's Laurent Brossoit for his 12th goal in 17 games and 18th overall.

Gustavsson kept it a one-goal game with solid play in the second as Winnipeg outshot the Senators by a whopping 17-4 margin. The Jets had the first 11 shots of the period, with Gustavsson coming up big on Mark Scheifele in close just prior to a Jets power play around the midpoint of the frame.

It was Brossoit's turn, though, to play well to start the third as Ottawa had some good scoring chances on the power play. Then Morrissey tied the contest with his fourth of the season at 9:46, snapping Gustavsson's shutout bid.

This report by The Canadian Press was first published May 3, 2021.