DUNEDIN, Fla. — Devon Travis doesn't have to watch batting practice to know when Vlad Guerrero Jr. is hitting the ball. He can tell just by listening.
Feb 16, 2019 11:59 AM By: Canadian Press 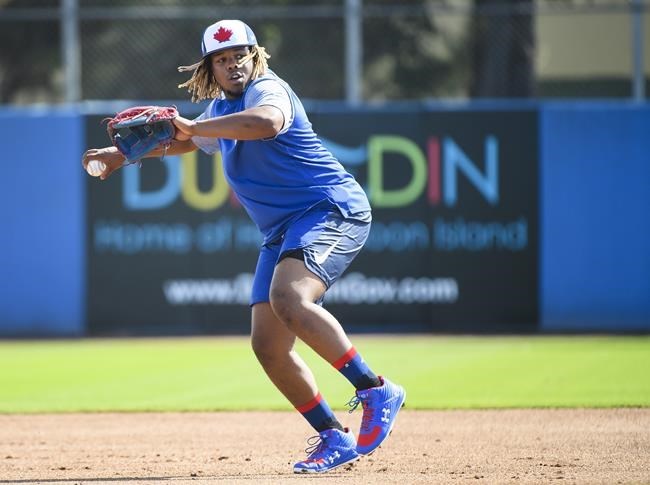 DUNEDIN, Fla. — Devon Travis doesn't have to watch batting practice to know when Vlad Guerrero Jr. is hitting the ball.

He can tell just by listening.

"It's the sound," the Blue Jays second baseman said Saturday after taking swings alongside baseball's top prospect at Toronto's spring training stadium. "I've never been into all the mechanical stuff but I'm sure if you spoke to those guys they'd tell you he does things that you dream of hitters doing.

"But the biggest thing for me is the sound. When he's hitting you don't have to look. You know it's coming off someone's bat who's different."

Guerrero reported to Blue Jays camp — his first time on the big league side of spring training — early Saturday morning, walking into the clubhouse with teammate Lourdes Gurriel, who occupies the locker stall next to his.

The first official workout for position players isn't until Monday, but the hitters who were in camp early went through defence drills and batting practice at Dunedin Stadium while pitchers and catchers worked out down the road.

Guerrero hit more than a few balls beyond the fence Saturday, impressing the Blue Jays' new hitting coach Guillermo Martinez in the process.

"I like to say he takes a professional batting practice. He literally takes every swing and thinks about everything he tries to do."

The hype around the 19-year-old Guerrero has been building for years, and it intensified last season after the burly third baseman dominated pitchers at both the double-A and triple-A level.

The son of Hall of Famer and former Montreal Expos great Vladimir Guerrero batted .389 in the minors in 2018, including a .402 average through 61 games with the double-A New Hampshire Fisher Cats — in between missing a month with a knee injury — and a .336 mark in 30 games with the triple-A Buffalo Bisons.

"Obviously the hype around him is strong and it's real. The kid can flat out hit and that's a fact," Travis said. "I think for us it's just, he's our teammate and we can't get caught up in the hype and excitement, however we are all excited to see what he can do in the big leagues.

"He's the type of guy who can carry a team so we're looking forward to it."

New manager Charlie Montoyo didn't get a chance to see Guerrero on Saturday — Montoyo accompanied the pitchers and catchers in their workout at Bobby Mattick Training Center — but he was pleased with the reports he received from both Martinez and third base coach Luis Rivera.

"He looked good taking ground balls and then ... the ball gets off his bat pretty good," Montoyo said. "So I guess he looked pretty good."

Travis, who was in the same hitting group with Guerrero, Gurriel and prospect Cavan Biggio for Saturday's batting practice, compared the sound he heard from his young teammate's bat to that of 2015 AL MVP Josh Donaldson and two-time league home run leader Jose Bautista.

Martinez, meanwhile, couldn't think of a suitable comparison for Guerrero.

"Not really, no," he said when asked if he'd seen anyone like him before. "He's a special player."