Manchester City broke through Newport's stubborn defence in the second half to beat the fourth-tier side 4-1 in the FA Cup on Saturday, although the result wasn't as straightforward as the scoreline suggested.
Feb 16, 2019 12:10 PM By: Canadian Press 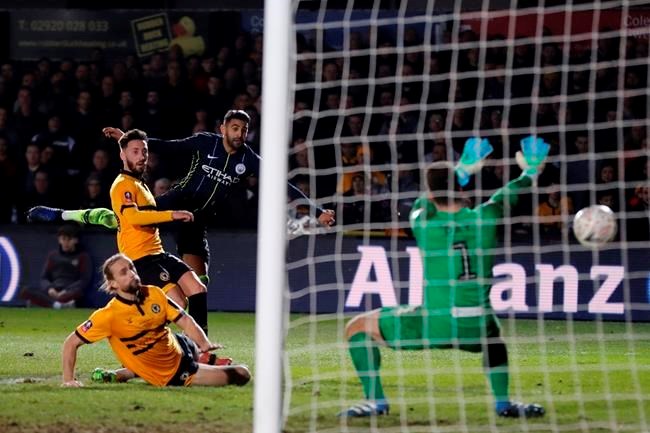 Manchester City broke through Newport's stubborn in the second half to beat the fourth-tier side 4-1 in the FA Cup on Saturday, although the result wasn't as straightforward as the scoreline suggested.

Newport's hopes of an epic fifth-round upset were still intact when Padraig Amond pulled a goal back to make it 2-1 in the 88th minute. But Phil Foden replied instantly with his second goal of the game and Riyad Mahrez added an injury-time score, allowing City to advance to the quarterfinals to keep Pep Guardiola's side in the hunt for a possible four trophies.

City's visit to South Wales had only one realistic outcome, but the win wasn't quite as simple as most expected.

City entered the game as the overwhelming — especially after beating Chelsea 6-0 last weekend in the Premier League — but struggled to impose its usual attacking game on a pitch that contained more mud than grass in many places.

"It was the worst conditions I have played in," Foden said. "We had to show professionalism and keep the ball moving and they tired in the end."

Newport, with an annual wage bill that's less than one of City's, managed to reach the halftime break still at 0-0, and even created the best chance of the opening 45 minutes. City goalkeeper Ederson had to produce a stellar one-handed save to keep Tyreeq Bakinson's header at bay in the 14th minute.

But Leroy Sane, who hit the crossbar in the first half, finally created the breakthrough for City in the 51st. Sane ran onto a pass from Gabriel Jesus and fired a left-foot shot that hit goalkeeper Joe Day square in the face before spinning through his arms and into the net. The strike left Day with a bloody nose, and left Newport's chances in tatters as well.

Foden doubled the lead in the 75th with a solo goal by Foden, after the teenager picked up the ball on the halfway line before charging forward and slotting a shot past Day.

Newport still managed to make it interesting when Amond seized on a defensive mistake to lob the ball over Emerson, but Foden quickly restored City's two-goal lead with a fierce left-foot shot into the net from inside the area. Mahrez added the fourth from the left side of the box in injury time, creating a scoreline that flattered the visitors.

"The first 20 minutes were difficult from throw-ins and long balls, and they are much better than us in those situations, but in the last 20 minutes we put the game into our hands," Guardiola said. "The home crowd was amazing. Winning here, I (understand) English football today better than ever and how tough the cup is in these conditions."

Brighton reached the quarterfinals for the second year in a row after holding off a late comeback attempt by Derby.

Brighton looked to be in complete control after taking a 2-0 lead at halftime, with Anthony Knockaert and Jurgen Locadia scoring for the Premier League side. But Derby threatened to make a comeback after veteran left back Ashley Cole — a seven-time FA Cup winner with Arsenal and Chelsea — scored his first goal in the competition in the 81st.

That made for a nervy last 10 minutes for the hosts, but Harry Wilson and Fikayo Tomori both shot wide for Derby to scupper any hopes of a comeback.

Knockaert opened the scoring in the 33rd minute by meeting a low cross in the area and sweeping a shot inside the near post, before Locadia doubled the lead on the stroke of halftime by firing in from close range after Yves Bissouma's effort had hit the post.

Cole responded with his first goal in English football in six years after Florian Jozefzoon went down under a challenge from Bernardo and the ball was cleared into the path of the former England defender. While his teammates appealed for a penalty, Cole calmly headed home.

Wallace headed in a cross from Ryan Leonard in the fifth minute and the hosts had a number of second-half chances to add to the lead, but couldn't find a way past Wimbledon goalkeeper Aaron Ramsdale for a second time.

It's the second time in three years the London club reaches the quarterfinals.

Andreescu learning from 2021 disappointment, hoping to bounce back on hardcourt
Jul 27, 2021 1:15 AM
Comments