Two events into the HSBC World Rugby Sevens Series, Canada coach Damian McGrath is seeing plenty of positives despite a labour dispute that cut into the team's pre-season preparations.
Jan 23, 2019 10:44 AM By: Canadian Press 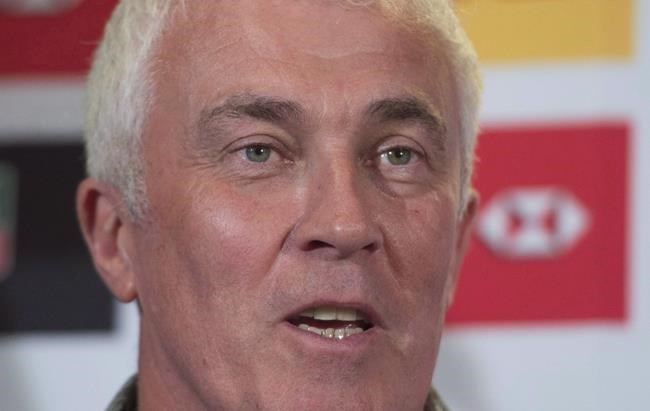 Two events into the HSBC World Rugby Sevens Series, Canada coach Damian McGrath is seeing plenty of positives despite a labour dispute that cut into the team's pre-season preparations.

While the Canadian men finished tied for 11th in both Dubai and Cape Town, they came close to making the Cup quarter-finals in South Africa. Tied 14-14 with Scotland, Canada conceded a try with 70 seconds remaining and lost 21-14. The way other results went, a win would have sent Canada into the final eight.

Not bad considering the team was sidelined for two months over a contract impasse with Rugby Canada prior to returning to training Nov. 1.

"I genuinely thought we'd struggle really badly but we performed really well," said McGrath, whose team takes part in the New Zealand Sevens this weekend in Hamilton. "We weren't that far away and we'll get stronger as the year gets on because the players will get fitter and more game-ready.

"So there'll be lots of improvement for us as the year goes forward which, in an Olympic qualifying year, is no bad thing because the real prize is in July when we have the Olympic qualifying tournament. I'm happy for us to get better bit by bit and stay under the radar and be able to work on improving our game."

The Canadians stand 12th in the World Series standings.

The U.S., runner-up in the first two events, top the table. New Zealand, champion in Dubai and winner of the 2018 Rugby World Cup Sevens, is second with Olympic champion Fiji, the winner in Cape Town, third. England is fourth and South Africa fifth.

The top four teams at the end of 10-event season will secure automatic qualification for the 2020 Tokyo Olympics.

The Canadians find themselves in the unlikely position of cheering on the Americans this season. Automatic qualification would remove the U.S. from the North American qualifying tournament, which would ease Canada's path to Tokyo.

Canada lost 21-5 to the U.S. in the NACRA Sevens Cup final that served as North American qualifier for the 2016 Games in Rio. The Canadian men then finished fifth in a last-chance qualifying tournament in Europe.

McGrath gets a boost this weekend with the return of Mike Fuailefau and Phil Berna from long-term injury absences.

"It's almost like getting a new player back," McGrath said of Berna, who has been out more than a year with a serious ankle/leg fracture. "He's such a talented player and he's only a young man — 22."

The hard-working Fuailefau, who has been out since the Rugby World Cup Sevens last July, is also coming off ankle surgery.

"It's fantastic to have him back because he's such a key player for us," said McGrath.

Davis and Webster could win their first sevens caps for Canada. They are part of an emerging young group that also includes Cooper Coats, David Richard and former Toronto Wolfpack forward Quinn Ngawati.

"I feel that (Webster) and David Richard will be stars at sevens or 15s for years to come," McGrath said. "I'm really excited about those two young guys."

Called up as an injury replacement, Halifax's Coats made his World Series debut in Cape Town in December. Davis has already won caps for the 15s team under coach Kingsley Jones.

"I think it's a big bonus for Kingsley that's Cole's getting a chance to work on his skills and the things that sevens bring to your game," said McGrath.

Speedster Justin Douglas arrives in Hamilton as Canada's all-time tries leader after upping his total to 126 with four tries in Cape Town. Sean Duke had held the record at 124.

"I've waxed lyrical about Justin since I arrived (as coach) and nothing that's happened since has made me change my mind," said McGrath. "He's just a great player, one of the best that Canada has ever had at sevens."

Captain Nathan Hirayama also reached a milestone in South Africa, going past 1,500 career points. Hirayama has 45 points in the opening two stops on the series.

Canada opens Pool D play in Hamilton against No. 9 Spain, No. 2 New Zealand and No. 15 Japan.

After New Zealand, the teams head to Sydney, Australia, for play Feb. 2-3.