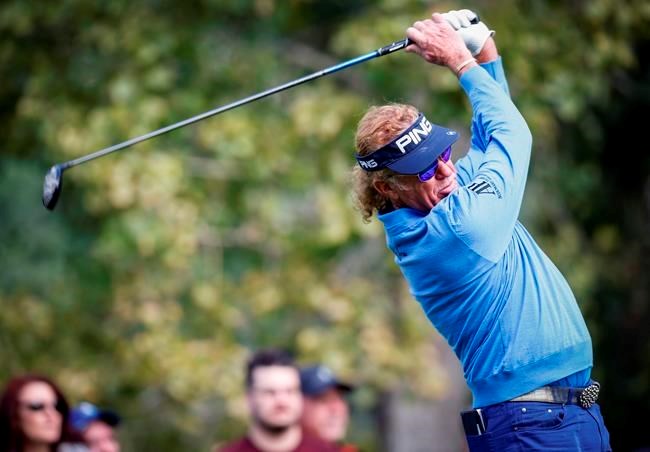 CALGARY — A clutch putt vaulted Joe Durant into the lead atop the Shaw Charity Classic leaderboard.

Durant drained an eagle putt from the fringe on the par 5, 18th hole at Canyon Meadows Golf and Country Club to shoot a round of 7-under 63 on Saturday. That gave the 54-year-old golfer from Pensacola, Fla., the outright lead at 11 under through two rounds of play at the PGA Tour Champions event.

"I had about a 15-footer or so and actually when I hit it, I thought I left it short, but it rolled out nicely," said Durant, who also had six birdies and one bogey. "That was a really nice way to finish today."

Durant was also in contention to win the 2014 Shaw Charity Classic, but shot 73 in the final round to drop back into a tie for 19th.

"I mean, you learn every time," said Durant, who shot 66 in his final round last year to finish in a tie for sixth spot. "If you hole one out and win or if you don't succeed on Sunday, you're always learning. Just figure out a better way to handle it the next time you get an opportunity."

Charles Schwab Cup standings leader Miguel Angel Jimenez shot 66 and is just one shot behind Durant at 10 under heading into Sunday's final round.

"It's going to be a very interesting finish," said Jimenez, who's aiming to improve upon his second-place showing behind Scott McCarron at last year's tournament. "I'm going to try to do my best. I'll try to keep focus. I've been playing aggressive and hope to hole some putts and win the trophy."

First-round co-leader Kirk Triplett is also in the mix at 9 under, while McCarron is alone in fourth at 8 under.

"To come out here and be the defending champion and see if we can back it up would be something pretty special," McCarron said.

"I'm not really going to put a score in mind because it just depends on what the weather's like, what the conditions are like, and just not get too caught up in scoreboard watching. You've got to go out there and hit the first fairway and go from there."

Esteban Toledo followed up the 66 he shot on Friday with a 67 on Saturday to move into fifth spot at 7 under.

World Golf Hall of Famer Bernhard Langer is tied for sixth place at 6 under in a group that includes Doug Garwood, Joey Sindelar and Scott Parel.

Langer carded a round of 5-under 65, a day after opening up the tournament with a 69. The German golfer teed off nearly two hours ahead of first-round leaders Triplett and Jimenez.

"It was the coldest I've played golf in a long time," he said about the morning temperature. "It was probably 49, 50 degrees (Fahrenheit) and a 12 mile-an-hour wind out of the north, so it felt a lot colder than that. Guys were bundled up. My caddie looked like he was going to go skiing. He had a face mask on like he's doing an exhibition in the Antarctic or something like that."

The 61-year-old Langer is looking to improve upon his showing at the Shaw Charity Classic two years ago when he finished in a tie for second behind Carlos Franco.

"I'm going to be behind, so I'm going to have to come out aggressive and hopefully go low," he said of his mindset heading into the final round.

Rod Spittle, of Niagara Falls, Ont., carded a round of 1-under 69 and is in a group of five golfers who are tied for 10th spot at 5 under.

"After the first couple holes, I settled down," said Spittle, who had a rough start with back-to-back bogeys. "It's probably three or four (shots) too far away for me … but you never know. We'll still be trying to shoot 65 (on Sunday) and we'll see how that turns out."