It's more than 50 million years old if it's a week.

The McAbee Fossil Beds Heritage Site is just over a week old, having opened to the public as a heritage site after years of being restricted (access to the actual beds is still restricted except for experts). However, the fossils within the beds and in the area below them are around 51 million years old (but they don't look a day over 40 million).

The spectacular hoodoos above the fossil beds might have caught the eyes of passersby in the past as they drove by, but the fossil beds below are a researcher's dream. Paleontologists have been going there for decades.

Leroy Antoine, an elder from the Bonaparte Indian Reserve (the site of the fossil beds), is enjoying his first week on the job, showing people what lies in the hill above them, but beneath the ground. 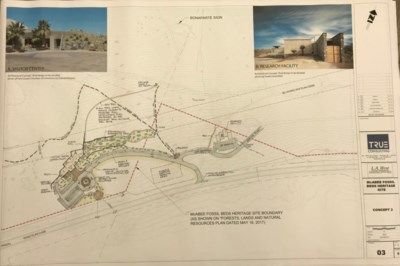 Plans for the site. (via Tereza Verenca)

"Fifty-one million years ago, when the climate was warmer, we had an inland lake on top of the hill there," he explains during a tour with KamloopsMatters. "As the lake disappeared, the layers were formed, which left the fossils in the ground. And then 20 million years later, a volcano came along. The outcrops you see on top of the fossil beds are the volcanic material left behind."

Since it's the site of a prehistoric lake, the fossils might not be a big surprise.

"We get a lot of fish, fern-like leaves, branches. I think there's been a couple of small birds found," Antoine says. "A lot of the material, you can basically trace that back to some of the stuff originating in China."

Since opening, he says visitation has ranged from a couple of people to over 100, depending on the groups who know about it.

There's a recently installed parking lot just off the road, a couple of interpretive signs and two site interpreters, Antoine and Gail Pierro, also from the Bonaparte Indian Band.

They'll show people the site, explain the history and show off the fossils (some of which you can touch). The site has a second area, with rock from the fossil beds and a sign sharing some history about the spot. Antoine is working to clean up the area and add more amenities (he recently set up a new picnic table so people can stop in for lunch).

There are big plans for the McAbee Fossil Beds Heritage Site, with two structures planned in the next five years, a visitor centre and a research facility. Also included in the plans are an ethnobotanical walk, public art and a viewing platform so visitors can look out over the Thompson Valley below. Antoine is excited for what that might mean for the band, as it'll add a major new attraction to the area.

The site is just west of Juniper Beach Provincial Park, located at approximately 4280 Highway 1. It's open from 10 a.m. to 5 p.m. Thursday through Monday for the summer.

Only fully vaccinated people to be allowed in House of Commons precinct
Oct 19, 2021 5:30 PM

Lawyers say they should be excluded from money laundering policies in B.C.
Oct 19, 2021 4:08 PM
Comments