OTTAWA — The Supreme Court of Canada has ruled the vast majority of confidential cabinet documents in two provinces should remain secret, in cases dealing with how judges are paid.
Jul 31, 2020 2:37 PM By: Canadian Press 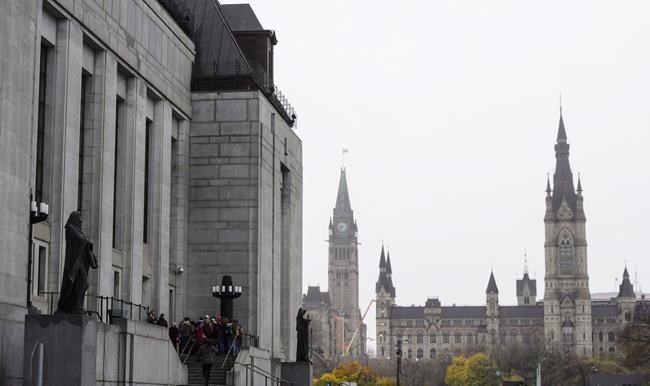 OTTAWA — The Supreme Court of Canada has ruled the vast majority of confidential cabinet documents in two provinces should remain secret, in cases dealing with how judges are paid.

However, the ruling does order parts of a cabinet document in Nova Scotia to be disclosed.

The decision deals with two separate cases in Nova Scotia and British Columbia where lower courts had ordered the production of cabinet documents that are traditionally kept highly confidential.

In both provinces, independent commissions set up to review salaries for provincial court judges in 2016 had proposed significant pay hikes, but the cabinets in both provinces rejected those recommendations and decided on smaller pay increases.

In Nova Scotia, that province's independent commission recommended a 5.5 per cent pay hike with an additional 1.2 per cent increase the following year and 2.2 per cent more the year after.

Nova Scotia responded by freezing judges salaries for two years and only allowing a one per cent increase in 2019-20, saying at the time it was to bring judges' salaries in line with what provincial civil servants were receiving at the time.

The judges' associations in both provinces applied for judicial reviews and wanted to see cabinet submissions that justified altering the recommended salary hikes.

In its unanimous decision Friday, the Supreme Court of Canada quashed the B.C. Court of Appeal's decision ordering the B.C. government to produce the cabinet documents.

Supreme Court Justice Andromache Karakatsanis wrote that the judicial commission failed to establish there any reason to believe the cabinet documents in that province may contain evidence to show the government failed to meet a three-part test that must be applied in decisions related to judges' salaries.

However, in the Nova Scotia case, Canada's top court ruled most of the cabinet submission should remain confidential, except two components: a paragraph in one document labelled "government-wide implications" and an appendix to the report called the "communications plan."

The Nova Scotia case differed from the B.C. case because of public statements made by government at the time comparing the salaries of judges to those of civil servants. Also, the Nova Scotia salary freeze that was eventually imposed was exactly what the government had proposed in its submissions to the independent commission before it had formulated its recommendations.

These circumstances called into question whether the Nova Scotia government properly showed respect for the commission's process, which is a requirement under the law, the ruling states.

The ruling is not expected to be widely precedent-setting when it comes to the protection of cabinet confidentiality for provincial governments, as the decisions are based on the specific facts and circumstances of these particular cases involving judicial remuneration.

This report by The Canadian Press was first published July 31, 2020.