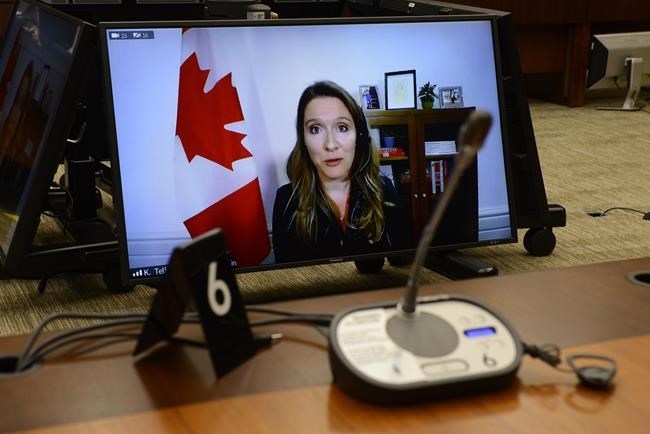 Katie Telford wrote members of the defence committee Thursday, offering to testify at their meeting Friday.

Opposition parties have been demanding she appear to explain an apparent discrepancy between Trudeau's assertion that his office did not know a complaint against general Jonathan Vance involved sexual misconduct and other testimony and emails suggesting that it did know.

Telford has been in the hot seat since Elder Marques, a former senior adviser in the Prime Minister's Office, testified two weeks ago.

Marques said he was informed in 2018 by Telford or her assistant that there had been an allegation of "personal misconduct" against Vance, then chief of the defence staff. He said he assumed it was sexual in nature.

Marques said he immediately referred the matter to the clerk of the Privy Council, advised Telford that he had done so and then "kept her apprised as matters developed."

The allegation had first been raised a day earlier with Defence Minister Harjit Sajjan by the military ombudsman at the time, Gary Walbourne. Former clerk Michael Wernick has testified that his office attempted to investigate the allegation but that Walbourne was not able to provide any information because the complainant did not want to be named.

The allegation involved an off-colour email that Vance allegedly sent a junior officer in 2012, before he became defence chief.

Military police are now investigating that complaint as well as another allegation that Vance had a sexual relationship with another officer under his command.

Vance has not responded to requests for comment, but Global News, which first reported the allegations, says that he has denied any inappropriate conduct.

Since Marques' testimony, the Conservatives have been accusing Trudeau of lying about not knowing the allegation was sexual in nature. Alternatively, they say Telford covered it up.

Earlier this week, the Conservatives moved a motion calling for Telford to be fired. That motion was defeated.

Trudeau has maintained that no one in his office knew that the allegation was "a Me Too complaint."

"We did not have information on what was the nature of the complaint, of that allegation,” he said last week.

Telford is expected to say much the same during her testimony Friday.

However, emails released under the Access to Information Act have shown that bureaucrats at the time were referring to the allegation as "sexual harassment."

Privy Council bureaucrat Janine Sherman has testified that some of those emails were shared with staff in the Prime Minister's Office.

Walbourne has testified that he told Sajjan what the allegation was about but that Sajjan stopped him when he tried to show him the evidence.

Sajjan has said he wasn't told the details and that he didn't want to know in order to avoid any perception of political interference in the matter. He's said he referred the issue immediately to the Privy Council Office.

Trudeau maintains he only learned the details when Global first reported them in February.

Shortly after that report, Vance's replacement as chief of the defence staff, Admiral Art McDonald, stepped aside due to an unspecified allegation of misconduct. He, too, is now under military police investigation.

Vance stepped down as defence chief in January. He officially retired from the military last month.

This report by The Canadian Press was first published May 6, 2021.

Canada has admitted broken Indigenous relationship, unlike China on Uyghurs: Trudeau
Jun 22, 2021 9:28 AM