Madison Olds and the delightful, satisfying, very good start to 2019

It's a very good time to be Madison Olds.

Oh, and she has also released her first full-length solo album, Blue, a month ago.

That's probably enough for one year, but the 21-year-old is just getting started.

"It's been crazy to keep that pace up," Olds says. "I mean like if this is as good as it gets, this is already the best year of my life so far."

She adds she's headed to the Canadian Music Week event in Toronto, where bands from across the country play shows across the city and industry insiders, hipsters and the general public try to catch as many shows as possible.

Olds has big dreams, and while she's appreciative of where she is now, that hasn't dulled her ambition.

"In the next couple of years? I'm not kidding you. Goal — Madison in Madison Square Garden," she says, laughing, but still serious. "That's the goal. Yeah, that's the goal. I want to be as big as I possibly can be."

Like any human being, Olds started off small, but even then she liked music and the hot, terrifying spotlight.

"I started, I think, at four years old," she remembers. "I sang my first song at church and it was all me and my little gold dress and I still remember it like such a special moment."

Growing up she stayed on the stage as a competitive dancer and did musical theatre in school. At 13 she and her guitar got to know each other better when she decided to try songwriting.

"I picked up a guitar and I was like, 'I'm going to try songwriting'; And I picked up the guitar and immediately put it back down and I was like, 'This is way too tough,'" she says. "Then a couple of months went by and I kept trying, and now I can successfully play through a full song without messing up a chord."

Before recording Blue last July, the people of Kamloops likely saw Olds around town, either as part of the all-female trio Bees and the Bare Bones (with Abby Wale, who helped write Thank You) or as a busker on the streets.

Since then she's been growing her online following, saving her nickels and dimes to travel in order to get more experience, meet more people and write more songs. She's been to Nashville a couple of times, not to play so much as to write songs (Want Some, on Blue was written down there). Her video for Thank You was shot in Vancouver and was released in November as the lead single.

Despite the music industry being based in other places, Olds is happy to have Kamloops as her home base.

"I have been so fortunate to grow up in Kamloops and to start my career here because now, anywhere I go, I'm not like drowning in a big city," she tells KamloopsMatters. "I'm so blessed that this is where I've got to start because I can guarantee I would not have the support in a big city because there are just too many people."

The fact she's found a career in music is perhaps not a surprise to her family, who are currently all involved in her endeavours; her mom is her manager, while her dad and brother played bass and drums most recently at the Jim Bean competition.

Back a couple decades ago her dad was studying music at UC Berkeley, jazz composition to be precise. When he met his future wife and they decided to start a family, music had to take a back seat. Luckily it was still in the same vehicle though, and Olds had music around her from a young age.

"I think it's been exciting that I'm taking it really seriously now because it's something that we all get to do together," she says. "We're like this amazing family band now." 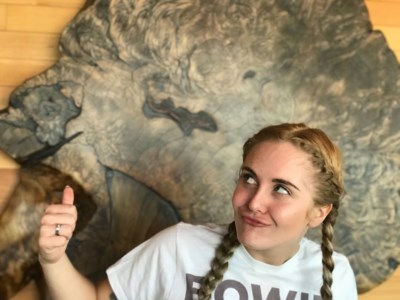 Madison Olds admits she absolutely loves the spotlight. (via Brendan Kergin)
"I'm a ham, I'm a complete ham," she laughs. "Like, a spotlight — I'll just go right to it and it's horrible. Like my friends are probably so sick of it by now."

But, who'd want a performer who's scared of the stage?

"I love it. I thrive most when I'm under the spotlight," she says.

While Olds started off with a country flare and still retains that to a certain extent, her current influences come more from the pop world, like Ed Sheeran and Julia Michaels.

"They've done so well in the commercial realm, but their stuff isn't overly saturated with — I use this term white girl pop where everything sounds the same," she says. "I feel like they've done a really nice job of the blend of commercial and relatable melodies, super easy to sing a lot to, but with actual meeting within the lyrics and storytelling."

For those looking for more Olds in their life, she plays a show Saturday night, March 30, at Chances Casino. More info on that HERE.

If you're not able to go to a show, but still want to support her, Olds says a big thing that music industry people pay attention to is her social media following. That means they're checking Instagram, Twitter, Facebook, YouTube and Spotify.

"If I don't have that social proof, nobody takes me seriously. Which is so unfortunate," she says. "And it means the world to have people follow me."

And if she gets that, who knows, maybe in a year or two we'll be writing about a young woman from Kamloops headlining Madison Square Garden.