Greens likely to hold virtual leadership convention due to pandemic: May

OTTAWA — The first leadership contest for the Green Party of Canada in 14 years is likely to end in October with an online announcement instead of a big party, former Leader Elizabeth May said Wednesday, as the COVID-19 pandemic continues to spare no
Jun 3, 2020 3:40 PM By: Canadian Press 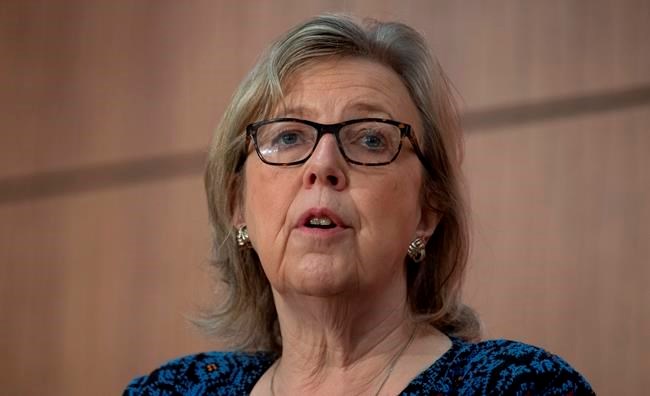 OTTAWA — The first leadership contest for the Green Party of Canada in 14 years is likely to end in October with an online announcement instead of a big party, former Leader Elizabeth May said Wednesday, as the COVID-19 pandemic continues to spare no big events.

There are seven people conditionally approved to run in the race, which passed its first deadline Wednesday when the party stopped accepting applications from candidates. All have paid the initial $1,000 deposit. Some have a few more days to pay an additional $9,000. All must pay the final $20,000 by the end of August if they are to be on the ballot.

The $30,000 fee is 15 times higher than what May paid in 2006, but she says the party is much different, with three elected MPs and a national presence that did not exist back then.

May is still an MP and the party's parliamentary leader but stepped down as national leader last fall. She said she is encouraged by the diversity in the race, even if the pandemic is making the contest harder and will likely lead to cancelling in-person convention.

"I think it's unlikely at this point that we'll be physically gathering in Prince Edward Island in the first weekend in October," May said at a Wednesday news conference on Parliament Hill.

The Conservatives already cancelled their planned leadership convention, which was to happen in Toronto at the end of the month, and will announce the winner in August after a mail-in vote.

B.C. Lawyer David Merner, who was accepted as a Green leadership candidate in early April, says the convention should be moved online.

"It's the responsible thing to do," he said.

"Even if they had it I don't think anybody would come."

The Greens were already planning an online vote, backed up with mail-in ballots for those who can't vote online, so moving to a virtual announcement won't be hard, said candidate Annamie Paul.

"We've all had to learn to live with disappointment," said Paul, who lives in Toronto, and has spent much of her career in international affairs, including a stint as an adviser at the international criminal court in Belgium.

Paul was the first candidate given the green light, but by the time that happened at the end of March, COVID-19 had already closed down much of the country, forcing her and the other candidates to stop their tours and take everything online.

Paul is also now feeling the effects of the pandemic more personally. Her father died suddenly in a long-term care home last week from a urinary tract infection caused by an improper catheter and left untreated. She said his death is strengthening her resolve to fight for change for Canadians and a health-care system that values people over profits.

The seven people running are a relatively diverse group. All but former Ontario Liberal environment minister Glen Murray have represented the party on the ballot at least once before.

Meryam Haddad, a Montreal lawyer, who launched her campaign May 22, describes herself as a millennial, a socialist, a lesbian and an immigrant from Syria.

Murray was the first openly gay mayor of a city in Canada. He and Merner are both former Liberals now aligning themselves with the Greens.

Montreal environmental activist Dylan Perceval-Maxwell, and Ontario lawyer Dimitri Lascaris rounds out the group, the latter admitted as a candidate Wednesday after the approvals committee overturned its decision to bar him from running.

Nova Scotia veteran Judy Green is appealing the decision to bar her candidacy. She refused to comment Wednesday when asked what reasons the party gave her but said she is hoping it will get resolved.

Note to readers: This is a corrected story. A previous version said the seven candidates in the Green party leadership race include three women and four men.