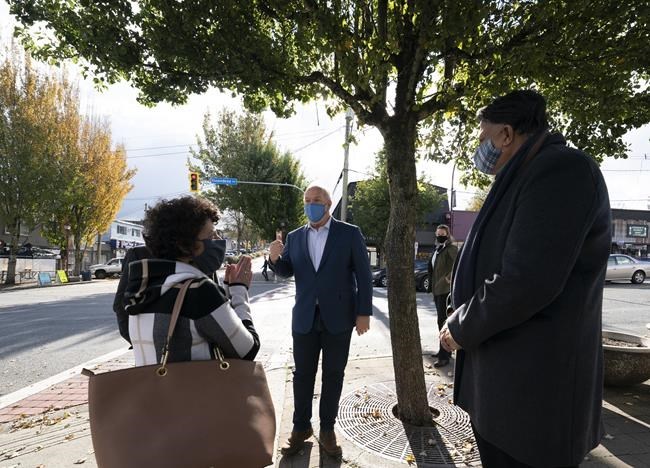 VICTORIA — British Columbia's New Democrats took a risk calling a snap election during a global pandemic to pursue a majority government, creating a major campaign issue for the party's opponents.

NDP Leader John Horgan said he called the election more than one year ahead of schedule because he is seeking the certainty and stability of a majority during uncertain times, but he spent much of the campaign fending off accusations of political opportunism.

The Greens accused Horgan of breaking a governing agreement in place since 2017, and the B.C. Liberals said he withheld COVID-19 pandemic relief dollars for struggling businesses to bolster his chest of election goodies.

"Once British Columbians came to terms with the fact the election was underway they wanted to know what the options were, what their choices were and they'll act accordingly," Horgan said in an interview. "I believe now we're days away from putting the election behind us so that we can have a new government, whoever that might be, focused on the needs of British Columbians."

The election is being conducted safely and support for increased days of advanced polls and requests for mail-in ballots is encouraging, he said.

Green Leader Sonia Furstenau said the election was unnecessary and irresponsible during the pandemic.

She said the agreement the NDP reached with the Greens to form a minority government after the 2017 election was stable, but Horgan decided to break the trust to further his own political ambitions.

"I believe that you need to earn trust everyday," said Horgan. "It's not just about an agreement among politicians. Where the confidence is required is in communities right across B.C. That's what I've been talking about and getting a positive response."

Prof. Kimberly Speers, a Canadian politics expert at the University of Victoria, said the timing of the election was a constant issue in the campaign and the NDP didn't do a good job of articulating for voters the decision to go to the polls early.

She said she sensed Horgan may have considered potential changes in the NDP's relationship with the Greens following the departure of former Green leader Andrew Weaver earlier this year.

Weaver, who left the Greens to sit as an Independent, is not running in the election and has endorsed the NDP.

"Something is going on there because if Weaver is supporting the NDP and not the new leader of the Green party, there's something going on," said Speers. "I don't know what it is, but it does raise my eyebrows in terms of seeing that agreement breaking down somehow."

When the election was called, the NDP and Liberals each held 41 seats in the legislature. There were two Greens, two Independents and one vacancy.

Prof. Kathryn Harrison, a political scientist at the University of British Columbia, said the NDP spent a large part of the campaign trying to convince voters the election was not just about good timing for the party.

"I think the NDP had to have an argument ready about why they were calling an election and it couldn't just be we're ahead in the polls and we want to lock down a majority now," she said. "They had to say we want certainty and stability."

During the televised leaders debate, Wilkinson accused Horgan of betraying the Green party and withholding pandemic recovery funds from struggling businesses during the summer in order to introduce a $1.5 billion relief plan days before the election call.

The Liberal promise to eliminate the seven per cent provincial sales tax for one year, with a return to three per cent the following year, saw the NDP counter with a pledge to give most families $1,000 and individuals $500.

"We said we wanted to put money directly in the hands of middle- and low-income British Columbians so that they can make their choices about how to get through this pandemic," Horgan said. "The idea of a PST reduction to zero does nothing but blow a hole in the budget, some $8 billion."

Prof. Andrey Pavlov, who teaches economics at Simon Fraser University's Beedie school of business, said the PST cut does more for the stimulating the B.C. economy than the NDP's $1,000.

"It's a one-time payment," he said. "It doesn't really draw any other funds into the economy."

Horgan also offered apologies during the campaign for his own comments and those of candidate Nathan Cullen, a former NDP member of Parliament.

Horgan also apologized shortly after the debate for saying he doesn't "see colour" when asked how he reckons with his white privilege.

"The good news is there has been light shone during this campaign on racism and the need to not just talk about it in a debate during an election campaign, but we need to talk about it everyday," he said on Wednesday.

This report by The Canadian Press was first published Oct. 22, 2020.