As some protesters in D.C. gird for battle, others provide first aid, supplies

WASHINGTON — Moving through the pulsing mass of angry activism outside the White House, a handful of people are providing help and first aid to police and protesters alike as enraged Americans register their dismay with the police killing of George F
Jun 3, 2020 2:46 PM By: Canadian Press 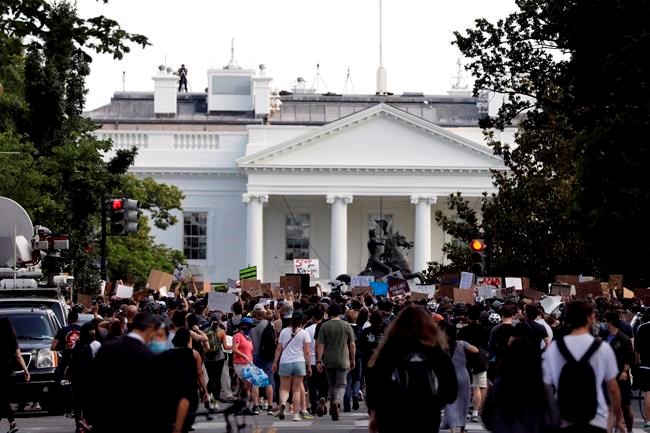 WASHINGTON — Moving through the pulsing mass of angry activism outside the White House, a handful of people are providing help and first aid to police and protesters alike as enraged Americans register their dismay with the police killing of George Floyd.

Morris Crawford, a former U.S. military combat medic, toted a backpack filled with medical supplies through the streets Tuesday night just outside Lafayette Square, the front line in a standoff between demonstrators and an endless line of troops armed with truncheons and riot shields.

"I came out here to help to spread my word, but also to help people who are injured," Crawford said, straining to be heard over the gas mask around his neck as protesters seethed against the two-metre fence around the park, shouting at officers.

Over the course of the night, the troops would occasionally return the sentiment, advancing their formation menacingly towards the fence, prompting the agitators to hoot and holler in anticipation of another fight — a clash that, on this night, would not materialize.

"I'm loaded down with medical supplies," said Crawford, jerking a thumb toward his bulging military-issue backpack.

"My goal out here is if I see someone injured, I'm running to help them. I don't care where they are at, cop or non-cop, if someone's injured I'm going to try to help them."

One pair of Good Samaritans dragged behind them a wagon loaded with water, snacks and bottles of milk (to ease the sting of pepper spray), urging eager protesters to take whatever they needed.

Another woman brandished a chisel-tipped marker, writing a D.C. phone number on people's forearms for them to call should they suddenly find themselves in police custody.

"Who wants a bailout number?" she shouted. "If you're scared, go home."

Protesters have been roiling the streets of U.S. cities nightly for nearly a week since the May 25 death of Floyd, whose final eight minutes of life under the knee of since-fired Minneapolis police officer Derek Chauvin were recorded on cellphone video.

Ariana Masotti, a senior at D.C.'s George Washington University, rode her bike up to a small group of protesters Wednesday and passed out bottles of water in front of heavily armoured police and National Guard soldiers blocking the street near the square.

"I saw people doing it, and I thought, 'You know what, it's not going to kill me to bring a case of water down here,'" Masotti said under a broiling mid-afternoon sun. "We have a cause here, and it's really important. If we don't help our own, there's no way we can stay out here. I think it's important that we keep it up."

Whether the new charges help to assuage the public anger remains to be seen.

In D.C., one man leaned on a medical bag, a red cross fashioned from duct tape affixed to his black T-shirt, as he sat on a curb Wednesday, watching protesters gather in front of the police lines.

A trained emergency medical technician, the man — he gave his name only as Ramsay — said he's part of a larger group of EMTs who are on the scene each night, spread out to provide medical assistance where necessary.

"A bunch of us EMTs saw what was going on for the last few days, and we just decided to come out," Ramsay said. "We're here for that patient first, everything else is second."

Like his fellow guardian angels, Crawford was moved by Floyd's death to join the protests, which he's now done for three nights. But he has a personal motive as well, describing a confrontation with D.C. police four years ago that he's convinced was a result of the colour of his skin, even though it was a clear-cut case of mistaken identity.

"I had a cop's gun pointed at my head. He thought I was the guy he was chasing — not even close," he said.

"Next thing, I'm outside, on the ground, until they finish running all my information and everything, and they told me pretty much that I was in the wrong place at the wrong time and I needed to get the hell out of there."

Crawford said he wants to see the protests spark lasting reform in law-enforcement circles — third-party committees to adjudicate incidents of racially motivated abuse, education programs to help officers learn the insidious nature of racial profiling and mechanisms to ensure departments do a better job of policing their own ranks.

The ranks of the protesters swelled dramatically Tuesday after Donald Trump staged a dramatic display of police aggression and political opportunism.

During the supper hour Monday, authorities used pepper spray, smoke grenades and mounted officers — the White House denied that tear gas was used — to clear the intersection of protesters before Trump, Attorney General Bill Barr, Secretary of Defense Mark Esper and officials strolled through the square for an awkward Bible-brandishing photo-op in front of a historic, protest-scarred church.

Trump has promised to take a hard line with protesters who have set fires, smashed windows and looted stores. There was little of that late Tuesday, thanks in large part to the fence that now surrounds Lafayette Square, as well as some within the protests who shouted down those lobbing water bottles or shaking the barrier.

"The crowd has done a pretty good job so far of policing itself, calling out the instigators and keeping it from escalating to that point," Crawford said.

"I'm of the group that says we've been peaceful, and we need to stay peaceful. As soon as we start escalating it, what we're trying to tell them gets lost in the noise."

— With files from The Associated Press.