11 of Canada's worst tornado events over the years

A tornado carved a destructive path through the town of Mascouche, Que., on Monday, punching holes into roofs, uprooting trees and killing one man who had taken shelter in a shed.
Jun 22, 2021 9:04 AM By: Canadian Press 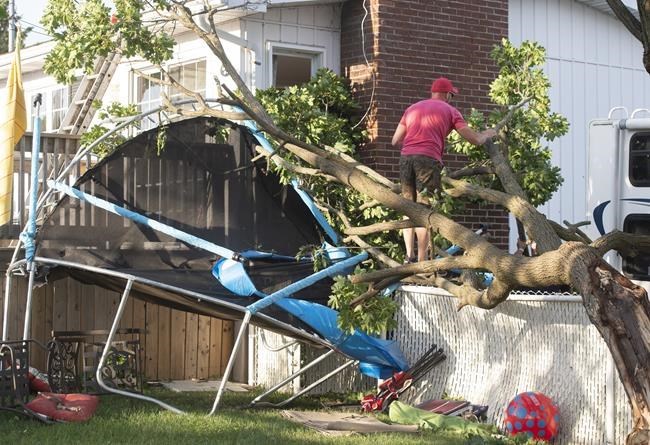 A tornado carved a destructive path through the town of Mascouche, Que., on Monday, punching holes into roofs, uprooting trees and killing one man who had taken shelter in a shed. According to Environment Canada, Canada gets more tornadoes than any other country except the United States. Other high-profile twisters include:

1912: Known as the "Regina Cyclone," Canada's deadliest tornado ripped through six city blocks in Regina, Sask., on June 30, killing at least 28 people, injuring 300 others, and leaving a quarter of the city's population homeless. While it only lasted for a few minutes, it took the city almost 50 years to pay for the damages.

1946: Canada's third deadliest tornado tore through the Detroit River on June 17, killing 17 people and damaging 400 homes in Windsor, Ont., and the surrounding areas. The twister also demolished over a hundred barns and farm buildings.

1974: A series of deadly tornadoes — known as the "1974 Super Outbreak" — struck Ontario and multiple U.S. states between April 3 and 4. Eight people died when a funnel cloud touched down in Windsor, and over 300 died in the 13 affected American states.

1985: Fourteen tornadoes hit multiple Ontario communities on May 31, including Barrie, Grand Valley, Orangeville and Tottenham. Twelve people died, eight of them in Barrie, and hundreds more were injured. The tornadoes also destroyed or damaged more than 1,000 buildings.

2007: On June 22, the country's first F5 tornado — the most powerful on the Fujita intensity scale — slammed Elie, Man., with winds exceeding 420 km/h. No fatalities or serious injuries were reported, though the strong winds severed utility poles, uprooted trees, and reportedly picked up an entire house and carried it a few hundred metres through the air.

2011: A historic Ontario town was devastated after the province saw its strongest tornado since 1996. One person was killed and 40 more were injured after an F3 tornado hit Goderich on Aug. 21.

2018: Six tornadoes swept across the Ottawa area and through the neighbouring Quebec region on Sept. 21, levelling homes and knocking out power grids along their way. No one was killed but dozens of homes were destroyed.

2020: Two teens were killed on Aug. 7 when a tornado touched down on a highway near Virden, Man., and tossed their vehicle into a field. Environment Canada classified the tornado as an EF3 on the Enhanced Fujita Scale, with estimated wind speeds of 260 km/h.