LONDON — British Prime Minister Boris Johnson insisted Monday he is firmly in control of the government, despite having to self-isolate for two weeks because a contact tested positive for the coronavirus.
Nov 16, 2020 7:04 AM By: Canadian Press 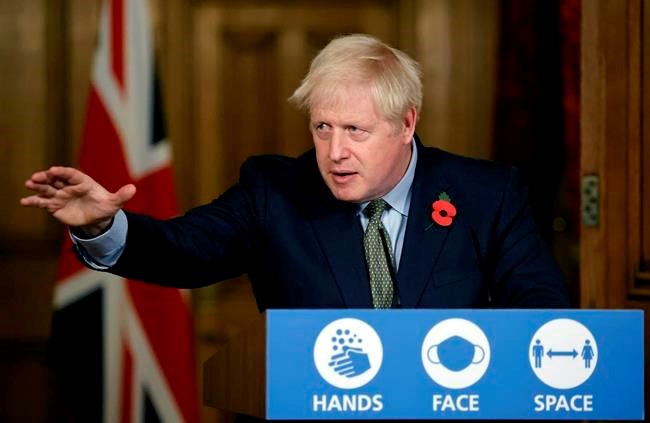 LONDON — British Prime Minister Boris Johnson insisted Monday he is firmly in control of the government, despite having to self-isolate for two weeks because a contact tested positive for the coronavirus.

The quarantine order came at the start of a crucial week in which Johnson is trying to suppress a new surge in U.K. coronavirus infections, quell turmoil within his Conservative Party and secure a trade deal with the European Union.

Johnson said in a video message on Twitter that he was “fit as a butcher's dog” and had no COVID-19 symptoms. He said he would continue to govern using “Zoom and other forms of electronic communication.”

Johnson met with some Conservative lawmakers for about 35 minutes Thursday at his 10 Downing St. office in London. One, Lee Anderson, subsequently developed coronavirus symptoms and tested positive.

Johnson was contacted by the national test-and-trace system by email on Sunday. He said he was following its order to self-isolate for 14 days inside his Downing Street apartment even though he said he is “bursting with antibodies” after recovering from the virus earlier this year.

Johnson said the fact he had been “pinged” by the test-and-trace network was evidence that the much-criticized system was working. The system routinely fails to contact more than a third of infected people’s contacts.

Four other lawmakers who attended the meeting said they were also in quarantine.

Britain has recorded almost 52,000 deaths of people with the virus, the highest toll in Europe, and experts say all such official numbers in the pandemic understate its true toll.

Johnson spent a week in the hospital with the virus in April, including three nights in intensive care. He later thanked medics for saving his life when it “could have gone either way.”

Officials say Downing Street is now a “COVID-secure workplace,” with staff observing social distancing and some working from home. But a photo released of Johnson and Anderson shows the two without face masks and standing less than the recommended 2 (6 feet) apart.

People who recover from the virus are thought to have some immunity, but it’s unclear how long it lasts.

Danny Altmann, professor of immunology at Imperial College London, said there have been more than 25 confirmed cases of COVID-19 reinfection globally, and the actual reinfection rate is “quite a lot higher than that, but not enormous.”

Johnson had planned a series of meetings and announcements this week to reboot his premiership after losing two top aides in messy circumstances.

Chief adviser Dominic Cummings and communications director Lee Cain quit last week amid reports of power struggles inside Downing Street. Cummings and Cain were key players in the 2016 campaign to take Britain out of the EU and helped Johnson win a decisive election victory in December 2019. But their combative style toward civil servants, lawmakers and the media made many enemies.

Johnson also planned to lead meetings this week to decide the next steps in Britain’s response to the coronavirus. A four-week nationwide lockdown for England is to end Dec. 2, but it’s unclear whether it will have been enough to curb a surge in infections.

Meanwhile, U.K. and EU negotiators are meeting in Brussels try to seal a last-minute trade deal before Britain makes a financial break from the bloc on Dec. 31. The two sides say a deal needs to be sealed within days if it is to be ratified by year’s end, but big differences remain on fishing rights and competition rules.

If there is no deal, businesses on both sides of the English Channel will face tariffs and other barriers to trade starting Jan. 1. That would hurt economies on both sides but mostly the U.K., which does almost half of its trade with the 27-nation bloc.

Johnson had also planned this week to lead a televised news conference, announce new environmental policies including a ban on sales of new petrol and diesel cars by 2030 and meet with restive Conservative lawmakers from northern England who want progress on promises to close the north-south economic divide.

US manufacturing increases again, but at slower pace in July
Aug 2, 2021 9:27 AM
Comments