Jack Welch, the GE chief who became a superstar, has died

BOSTON — Jack Welch, who transformed General Electric Co. into a highly profitable multinational conglomerate and parlayed his legendary business acumen into a retirement career as a corporate leadership guru, has died. He was 84.
Mar 2, 2020 9:40 AM By: Canadian Press 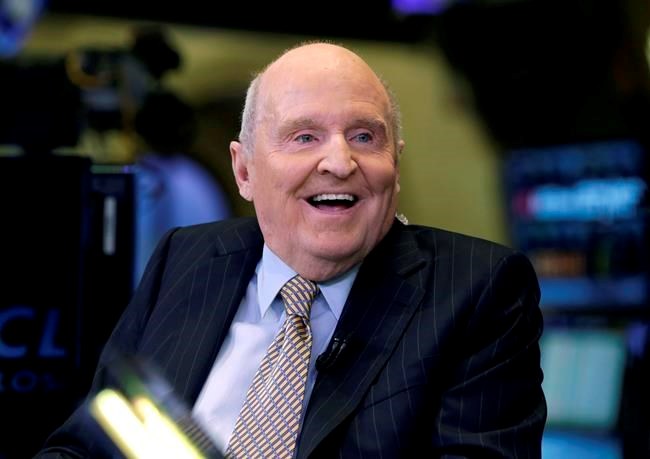 BOSTON — Jack Welch, who transformed General Electric Co. into a highly profitable multinational conglomerate and parlayed his legendary business acumen into a retirement career as a corporate leadership guru, has died. He was 84.

His death was confirmed Monday by GE. The cause of death was renal failure, his wife Suzy told The New York Times.

Welch became one of the nation's most well-known and highly regarded corporate leaders during his two decades as GE's chairman and chief executive, from 1981 to 2001. He personified the so-called “cult of the CEO” during the late-1990s boom, when GE's soaring stock price made it the most valuable company in the world.

A chemical engineer by training, Welch transformed the company from a maker of appliances and light bulbs into an industrial and financial services powerhouse. During his tenure, GE's revenue grew nearly fivefold, and the firm's market capitalization increased 30-fold.

Welch's results-driven management approach and hands-on style were credited with helping GE turn a financial corner, although some of the success came at the expense of thousands of employees who lost their jobs in Welch's relentless efforts to cut costs and rid GE of unprofitable businesses.

In 1999, Fortune magazine named Welch as its “Manager of the Century.”

For his first book, “Jack: Straight From the Gut,” Welch received a $7.1 million advance. Although released on the very morning of the Sept. 11, 2001 attacks, the book became a , and led to frequent speaking engagements where he took his on stage.

“From the day I joined GE to the day I was named CEO, 20 years later, my bosses cautioned me about my ,” Welch wrote in 'Straight from the Gut.' “I was labeled abrasive and consistently warned my would soon get in the way of my career ... and I'm telling you that it was that helped make it work.”

Welch did not slow down after leaving GE.

He became a senior advisor with private equity firm Clayton, Dubilier & Rice in 2001. He also taught a course on business leadership at MIT's Sloan School of Management in 2006. In 2009, Welch founded the Jack Welch Management Institute, an online MBA program that is now part of Strayer University.

While Welch was known for being hypercompetitive, he also stressed giving everyone a fair shake.

Along with Welch's fame came greater scrutiny. Welch found himself defending his retirement compensation. Amid a wave of corporate scandals, details of Welch's GE perks emerged in court papers during his 2002 divorce from his wife of 13 years, Jane Beasley. He received millions of dollars in benefits, including unlimited personal use of GE's planes, office space and financial services.

After the perks became public, Welch reimbursed the company for many of them, and paid for use of aircraft and other services.

His first marriage, to Carolyn, ended amicably in divorce after 28 years in 1987. Plans for his second divorce were disclosed shortly after Harvard Business Review editor Suzy Wetlaufer revealed she had become romantically involved with Welch while working on a story about him.

Welch didn't blame the media for the attention the affair generated.

“Christ, if I was a journalist, I'd write a scandalous story,” Welch told the CBS television news magazine “60 Minutes” in a 2005 interview. “I mean, it's a good story, but I don't care. I fell in love.”

Wetlaufer resigned the Harvard editing post in 2002 because of a furor caused by her relationship with Welch. In a January 2012 interview with CNN's Piers Morgan, when asked how he persuaded Wetlaufer to marry him, Welch replied, “My charm and probably my wallet.”

“We had a little scandal at the beginning,” he continued. “And it's been the greatest 10 years of our lives.”

The couple wrote a regular column, called “The Welch Way,” in Business Week magazine for four years. They also wrote management books, including “Winning” in 2005.

The Welches resumed writing a regular column in 2012, this time for Reuters. They used the column to dole out advice for business and political figures, including Facebook CEO Mark Zuckerberg and GOP presidential candidate Mitt Romney, whom they supported.

Welch was also active on Twitter, where he opined on everything from politics to business to sports and had 1.4 million followers.

Some of those opinions generated controversy.

He questioned a monthly jobs report in October 2012 that showed the unemployment rate had fallen below 8% for the first time in three and a half years. The report came two days after President Barack Obama had performed poorly in his first debate with Romney and a month before the election.

“Unbelievable jobs numbers,” he tweeted. “These Chicago guys will do anything...can't debate so change numbers.”

Obama hailed from Chicago. While some Republican members of Congress echoed his views, his criticism was mostly derided by economists and by former Labor Department officials from the Bush administration, who vouched for the accuracy of the data.

In his writing and speaking, Welch shared the wisdom he gained in a GE career that began right after he left grad school. He quickly climbed the ranks, and became the company's youngest chairman and CEO in 1981, at age 45.

Welch quickly shook up GE, laying off tens of thousands of employees in his first five years. That earned him the unwanted nickname “Neutron Jack,” after the nuclear weapon that kills people but leaves buildings largely intact. Welch bristled at the name, insisting that successful companies needed to be agile.

But the nickname stuck, and was used by President Donald Trump in a tweet Monday.

Welch also divested GE of billions of dollars in businesses that didn't live up to his mantra that they be No. 1 or 2 in their markets. The early moves dismantled GE's bureaucracy and eliminated many layers of reporting relationships.

“He's quick on the trigger — sometimes too quick,” Noel Tichy, the author of a 1993 book on Welch and a former leader of GE's vaunted training programs, said in 2001. “He'll make snap judgments. He's a human being that has temper tantrums.

“With all that, I think he's the greatest business leader I ever met,” Tichy said.

And Welch freely acknowledged his mistakes. One was Calma, a computer design firm that GE bought in 1981. The company wound up losing $50 million annually until GE sold it in 1988.

Welch delayed his retirement for one last bold move, a $41 billion bid to buy Honeywell International.

Welch predicted easy government approval for the largest acquisition GE had ever attempted, but European regulators rejected the deal as bad for competition.

In 1986, Welch made one of his boldest moves, a $6.4 billion acquisition of RCA, including the NBC television network. The deal energized GE, which made hundreds more acquisitions as the company moved aggressively into financial services, medical equipment and jet engines.

One of Welch's greatest accomplishments, his supporters say, is the talent GE has created by placing a premium on developing leaders. Many former GE executives now lead Fortune 500 companies.

Among the leaders Welch groomed was his GE successor, Jeffrey Immelt. Welch has written that picking his successor leading up to the 2001 leadership transition was the most important and agonizing decision he ever made.

In April 2008, Immelt became the target of Welch's blunt talk when GE missed a quarterly earnings target, a month after Immelt had promised investors the company would meet its goals. The disappointment sent GE shares down nearly 13% in a single day, prompting Welch to say that he would “get a gun out and shoot” Immelt if he allowed GE to miss earnings targets again.

After making the comment on CNBC, Welch went back on the GE-owned cable station the next day to renounce his harsh talk, saying, “Nothing, nothing, nothing is as disgusting to me as some old CEO chirping away about how things aren't as good under the new guy as they were under him.”

“From the first day I joined GE, I felt like I worked for Jack Welch, and that was all right by me,” Immelt said Monday. “He was a brilliant, aspirational leader. Jack was always direct, but his frankness was appealing and effective. His informality and accessibility made GE a team -- we all loved working for him because he wanted the people around him to succeed. Jack was the best boss I have ever seen. God bless him and his family.”

“When I last saw him, what I remember most vividly was when he asked me, ‘So how exactly are you running the company?’ Jack was still in it – committed to GE’s success. And to have Jack Welch ask me how I am running GE is pretty humbling,” said GE's current CEO, Larry Culp.

"He will be deeply missed by me and the entire GE team. And we’ll continue to his legacy by doing exactly what Jack would want us to do: win. We extend our thoughts and sympathies to Suzy and his family during this time.”

Welch joined GE that year as a junior engineer in Pittsfield, Mass.

He rose through the ranks, and built GE's plastics business into one of the company's fastest growing business units. He became a senior in 1977, and vice chairman in 1979. In 1995, Welch suffered chest pains and underwent heart bypass surgery.

The setback led to speculation that GE could be seeking a quick successor to Welch, but he remained at the helm another six years.

Welch moved to Boston after his career at GE, living in a townhouse in the city's Beacon Hill section.

In his later years, Welch also devoted more time to passions such as baseball — specifically, the Boston Red Sox.

He is survived by his third wife, Suzy Welch, and four children from his first marriage.

Mark Jewell, who no longer works at The Associated Press, was the principal writer of this obituary.