FRANKFURT — The head of the European Central Bank said Monday that Europe's top monetary authority is ready to take “appropriate and targeted measures” if necessary to support the economy against the headwinds from the new coronavirus.
Mar 2, 2020 2:58 PM By: Canadian Press 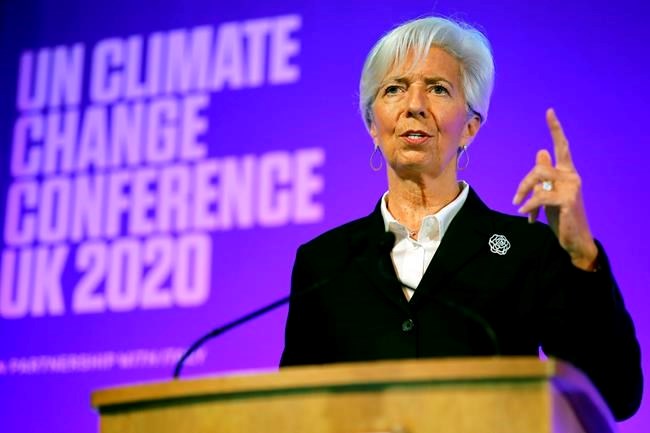 FRANKFURT — The head of the European Central Bank said Monday that Europe's top monetary authority is ready to take “appropriate and targeted measures” if necessary to support the economy against the headwinds from the new coronavirus.

Christine Lagarde said in a statement that the virus “is a fast developing situation which creates risks for the economic outlook.” She said the bank would closely monitor developments and act “as necessary and commensurate with the underlying risks.”

Lagarde's remarks come as stock markets have risen in the U.S. on speculation that central banks may step in with action to support the global economy against the disruption caused by the spread of the virus. That is the case even though some economists think central bank action might only have symbolic value, since lower interest rates cannot re-open businesses that have been closed to prevent the spread of the virus. Lower rates can boost stocks, however, and might be used to prevent turmoil on equity markets from spilling over to the wider economy.

The ECB has less room to cut than the U.S. Federal Reserve. The Frankfurt, Germany based central bank for the 19 countries that use the euro has already cut a key benchmark, its deposit rate, into negative territory. It stands at minus 0.5 . The ECB is also purchasing bonds with newly printed money in an effort to support tepid growth and raise inflation toward more normal levels, the bank's chief mandate. While Lagarde said the ECB was ready to act, she also hedged by saying that any action would be “commensurate with the underlying risks.”

The US Dow Jones index jumped 1,300 points or around 5%. The huge gains clawed back some of the ground lost in a massive sell-off that gave stocks their worst week since the financial crisis of 2008.

The ECB holds its next rate-setting meeting on March 12.