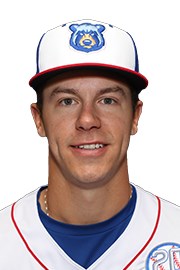 Chicago Cubs prospect Jared Young is back home in Prince George after spending the last two months playing in the Arizona Fall League for the Mesa Solar Sox.

Jared Young is going back to Tennessee.

The 25-year-old first baseman/outfielder from Prince George has earned a position with the double-A Tennessee Smokies, the team he played for in the 2019 season before his baseball career was interrupted by the pandemic which cancelled the minor leagues in 2020.

Young will begin his fourth season of professional baseball on Tuesday at Smokies Stadium in Sevierville, Tenn., where they begin a six-game series against the Montgomery Biscuits.

The Smokies are part of the eight-team Double-A South league.

In 2019, Young hit .235 with five home runs in his first season with the Smokies

Among the players starting the season in Tennessee is catcher Miguel Amaya, considered the No. 3 prospect in the Chicago Cubs’ farm system.