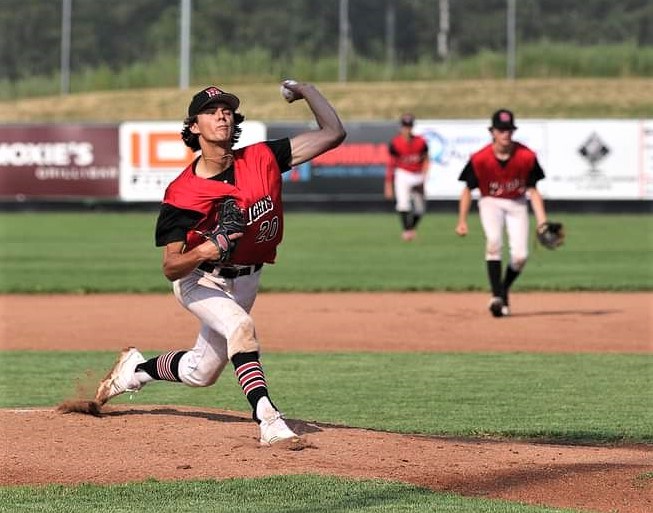 Prince George 18 U Knights pitcher Zach Fillion stretches out to deliver the ball to a Kamloops River Dogs hitter during their three-game exhibition series last week at CItizen Field. Fillion and the Knights will travel to Kamloops for a rematch against the River Dogs, July 23-24.Chuck Chin

The Prince George Knights turned the lights out on their BC Minor Baseball Association Under-18 triple-A opponents over the weekend in Kelowna and just like last weekend, none of the games were close.

In four games the Knights outscored their league peers a combined 63-7.

It started on Saturday with a 15-1 win over South Fraser, followed that day by a 13-4 triumph over the hosts from Kelowna. On Sunday the Knights rolled to a 20-2 victory over West Kelowna and pasted South Fraser 15-0.

The four-game set completed league play and Knights finished on top at 8-0.

They’ll now take aim at the Kamloops River Dogs, a college prep team that visited Prince George a couple weeks ago. The Knights held the edge in that series, winning two of three against the River Dogs.

The city’s top youth baseball team has two games this week in the Domino’s Pizza Prince George Senior Baseball League. The Knights face the JRJ Construction Orioles Tuesday at 7 p.m., and again Wednesday at 7. Both games are Citizen Field.

The Knights (1-1) rank third in the five-team league, just ahead of the fourth-place Orioles (1-2).